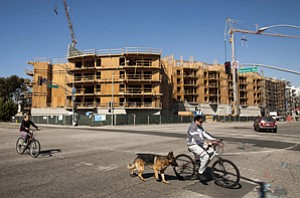 Spurred by an influx of technology and creative businesses on the Westside and a slowly rejuvenating economy, a flurry of activity has ignited in the marina, much of it aimed at a younger demographic that populated the area when it was first developed in the 1960s.

The result is a long-delayed development boom, one that could generate as much as $680 million in construction activity in the coming years.

Los Angeles County, which leases some of the 804 acres that comprise the community to developers in a series of long-term deals, has for more than a decade sought to spur new and rehabilitation projects in the seaside community, only to see those efforts stalled by regulatory and economic setbacks.

The county, now in the process of renegotiating leases that were signed a half-century ago, has seen the tide turn amid a resuscitating housing market and an influx of commercial activity on the Westside.

“If you go around to the different shopping centers, the demographic is definitely getting younger,” said David Sorenson, vice president of leasing at Jones Lang LaSalle Inc. who brokers deals in the area. “The people I talk to like the fact that they’re young professionals that are single and wanting to go out to eat and do things in the evening. I think that will continue to energize the area.”

More than 1,100 residential units are expected to be delivered in the next several months, and the long-awaited rehabilitation of the Fisherman’s Village retail center and the Marina West Shopping Center should commence in the coming year.

The development activity marks a financial boon to the county, which a decade ago hoped the build-out would be completed this year. A 2011 county report found that ground leases generated $38.8 million for the county annually, plus an additional $5.1 million in transient occupancy tax and $11 million in property tax revenue. When all the proposed projects are completed, $9.5 million more in annual leasehold rent is expected to land in county coffers.

The largest project under way is developer Jerry Epstein’s Shores, a $165 million, 544-unit apartment complex on Via Marina that will open this spring. Archstone, a large Englewood, Colo., apartment investment and management company, is renovating the two apartment properties it bought in the area last year and might rehab others in the market already in its portfolio.

“Seeing these projects now actually start to take shape is very satisfying,” said Gary Jones, deputy director of the Department of Beaches and Harbors, which has responsibility for the land and waterways that make up the marina. “It does bring the marina in line with what people now look for when they come to the coast or live by the water.”

The timing coincides with the heating up of the commercial and residential real estate markets on the Westside, as the expansion of the tech and entertainment industries draws workers who want to be close enough to the office to walk, bike or skateboard to their jobs.

Price is playing a role for both workers and employers in that process. Younger renters have sought to avoid the crowded and more expensive Santa Monica market, just as businesses have been drawn to the more affordable office space south of that seaside city.

That appeal has not been lost on developers, who have been breaking ground on mixed-use apartment complexes around the Westside at breakneck speed.

Epstein’s Shores project broke ground in 2011 after years of legal push and pull with neighbors and a long negotiation with the county, which required him to redevelop the project if he wanted to extend his ground lease.

“We are delighted by the upgrades and renovations in the marina as well,” he said. “It lifts the quality of life for the entire neighborhood, and we are delighted to be part of the rejuvenation and its environs.”

Archstone is betting big on the marina area. It bought a 205-unit apartment building called the Bay Club in October as well as the 224-unit Villa Venetia, now named the Archstone Breakwater, in August, bringing to four its apartment holdings in the marina. Large-scale, multimillion-dollar renovations, including gutting interiors and completely redoing facades, are under way on the properties it purchased last year. It is upgrading the adjacent boat slips with longer, more modern ones. Rents were not disclosed but Archstone’s website suggests monthly rents for its marina properties begin around $2,000.

Archstone representatives did not return calls.

Other projects are planned and many more have been contemplated but are still on the drawing board.

In support of the private development activity, the county is planning infrastructure projects that would include improving Burton Chace Park and the bicycle path through the area, and widening boat slips in the harbor.

“We are continuing to work with all stakeholders in the marina to continue the momentum that’s been created and ensure that we see a complete reposition of the marina and maximize its potential for all who want to use it and have used it for the last 50 years,” Jones said.