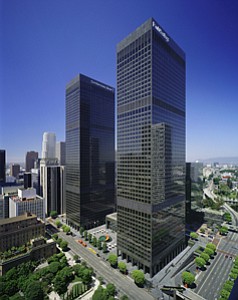 CommonWealth’s offer has been accepted by the buildings’ owner, Sacramento-based California State Teachers’ Retirement System, or CalSTRS. Sources said CommonWealth is in the midst of the due-diligence process, surveying the buildings and their operations, and is slated to close on the purchase by the end of September.

Jonathan Larsen, regional managing principal of real estate brokerage Cassidy Turley Inc., which has its offices at City National Plaza, said he thinks a $900 million price tag – or about $315 a square foot – makes sense for the 2.85 million-square-foot property, especially given the sale last summer of a 26-story office tower at 400 S. Hope St., which sold for about $340 a square foot.

“Between $300 and $325 a foot sounds about right,” said Larsen, who was not involved in the transaction, “because $340 a foot was at the top of the mountain, and I just can’t see anything else getting that high.”

The South Flower property was appraised at approximately $850 million last year, according to one source.

Ricardo Duran, a representative for CalSTRS, declined to comment on the property’s sale activity.

CommonWealth, whose offices are in City National Plaza, did not return requests for comment.

The firm’s pending purchase of the property comes on the heels of its June acquisition of a 21-story office building at 1888 Century Park East in Century City in a $305 million deal. CommonWealth purchased that building in partnership with the California Public Employees Retirement System, or CalPERS, in a deal brokered by Eastdil Secured LLC. The seller was a limited-liability corporation associated with Blackstone Group of New York.

Michael Soto, research manager in the downtown office of real estate services firm Transwestern, said CommonWealth’s Century City purchase was noteworthy, particularly because it indicated the company was eager to re-enter the L.A. real estate market after an eight-year absence.

“High-rise office buildings in West L.A. (don’t) trade very often, and in Century City, it’s even rarer,” he said. “The fact that CommonWealth Partners is back in the L.A. office market looking for acquisition opportunities is a positive sign.”

The twin high-rise office buildings at City National Plaza were built in 1972 by New York real estate company Rockefeller Group. Together, they briefly held the distinction of being the tallest buildings in downtown and, as such, attracted droves of law and financial services tenants from buildings on nearby Spring Street. The complex served for a time as the global headquarters of Atlantic Richfield Co.

Acquired by Shuwa Investments Corp. for $650 million in 1986 during the run-up of Japanese investment in U.S. properties, the towers began to fall into disrepair in the ’90s as Shuwa ran short of money to cover the debt incurred on the purchase. The buildings began to hemorrhage tenants, who fled for bigger and newer buildings that had risen downtown.

Thomas and CalSTRS acquired the property in 2003 for $270 million and have since invested millions of dollars into cleaning it up and renovating outdated systems.

Evan Moran, associate director at Newmark Grubb Knight Frank’s downtown office, said City National Plaza has some of the highest asking rents of any building downtown, and at about 90 percent, a great occupancy rate.

Still, CommonWealth will face challenges if the sale closes. Law firm Paul Hastings LLP, an original tenant whose name is emblazoned on the top of the northern tower, 515 S. Flower, has a long-term lease coming up for renewal in the next several years.

As a tenant in the Paul Hastings Tower, CommonWealth is intimately familiar with the property and nearby amenities. Located midway between the city’s government and financial districts, the property remains an attractive home to the attorney-accountant demographic of its past. The plaza’s proximity to members-only social clubs Jonathan Club and California Club is another draw, particularly for the kinds of well-heeled tenants who could upgrade the towers’ blue-chip roster.

Cassidy Turley’s Larsen said he has confidence that CommonWealth could be the kind of landlord to further elevate the property.