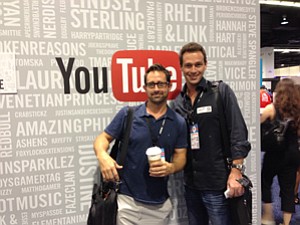 Creators on YouTube often rely on their fans to provide the enthusiasm – and the cash – to fuel a production.

It’s been the business model for stars such as Freddie Wong, who puts together a regular online fundraising campaign through Kickstarter to help pay for his Web series “Video Game High School.” This year, he raised more than $800,000 through thousands of small donations – a process known as crowdfunding.

While Kickstarter has been the crowdfunding site of choice for Wong and others, the co-founders of Santa Monica’s TubeStart Inc. think they have a better way of getting fans to fund online video: charge them monthly.

The theory behind the effort from Josef Holm and Claude Shires is that super fans are more than happy to chip in a regular sum for a series they love.

“As a creator, you don’t always need a huge 90-day goal, you’re just asking for support along the way,” said Holm. “This method helps promote the community feeling from all the people who want to help make it happen.”

TubeStart, which launched in mid-August, is only taking on crowdfunding campaigns that want to produce video content for the Web, in the process addressing one of the industry’s most vexing problems.

For online video creators, making money off the biggest fans has turned into a necessary supplemental income. Money doesn’t exactly pour in, unless you’re one of the few chosen channels that YouTube has funded through its $100 million original content initiative. And even for them, revenue from online ads is rarely enough to pay the bills.

What creators lack in ad income they hope to make up for in thousands of dedicated watchers who are happy to pay for content they’d otherwise get for free.

“The big fans are the ones most willing to support you,” said Daniel Altmann co-founder of Santa Monica’s Laffster Inc. That site has hosted a number of exclusive online events for comedians such as Patton Oswalt and Alonzo Bodden.

“To ignore their power and how much more they want than the average fan would be a lost opportunity,” Altmann said.

Holm and Shires are keenly aware of online video’s tough economics. They run a YouTube channel of their own, StandupBits, which features a daily clip of some clubby standup comedy and boasts a decent 9,000 subscribers.

The two licensed the videos from a production company and figured that based on the low overhead alone it would be a pretty sweet deal. Apparently not.

“We put the first couple hundred clips online and made just $200,” Holm said. “We did the math and realized that this would never work out. It doesn’t add up.”

Holm, who previously worked in marketing, and Shires, who owned a postproduction studio, still maintain the channel, but their focus shifted toward the ways other creators could make more money.

TubeStart offers several tiers: Subscription Funding, which charges fans monthly fees from $5 up to $50; Flexible Funding, where creators can set a goal but still get to keep the money even if the campaign falls short; and Fixed Funding, which follows the traditional Kickstarter all-or-nothing model.

The company, which is bankrolled by its creators, charges a 5 percent fee for all proceeds raised during the campaign, the same rate Kickstarter charges. So far, there are 11 active campaigns on the site, with more than 160 more apparently in the works.

The campaigners include a travel series run by two guys in Seattle (they’re looking for $5,000) and a comedy-sports program that pits two comedians against each other in the boxing ring ($25,000).

Still, the incentives behind the campaigns are the perks. A channel that features slow-motion photography offers high-end donors a seat at a studio where the creators will be shooting an episode.

Altmann sees companies like TubeStart and Laffster as the natural next step in the online video ecosystem.

“It took companies like Maker Studios and Machinima to help find a lot of the talent,” Altmann said. “Now there’s a bunch more to help these guys make money.”

There are motivations to these crowdfunding campaigns that go beyond money. YouTube has been notoriously tightfisted about giving up subscribers’ contact info and creators have griped that they have no way to reach out directly to their fans.

While getting YouTube to change its policies might not happen anytime soon, a successful campaign with a wide range of donors can cut out that middleman altogether.

“Even if one day the financial aspect to crowdfunding becomes secondary, this is still the best way to build up your core audience,” Holm said.