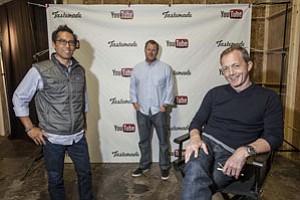 From left, Joe Peretz, Larry Fitzgibbon and Steve Kydd at studio of Santa Monica’s Tastemade, which drew a seven-figure deal in the first quarter. Photo by Courtesy Photo

The L.A. tech scene showed mixed signs when it came to startup investments in the first quarter, as companies on the Westside attracted strong interest from venture capital firms while funding throughout the rest of the region took a notable dip.

It was also the third consecutive quarter of declining investment dollars within Los Angeles County. The number of investments made by venture capital firms remained mostly flat, slipping from 28 in the previous quarter to 25.

The bright spot among the data came from firms in so-called Silicon Beach, defined in the report as Santa Monica and Venice, which accounted for more than two-thirds of the region’s investments. The $125 million that went into startups in that region was more than double the previous quarter and the area’s strongest showing in more than a year. It was led by banner raises of $60 million for headphone maker Beats Electronics LLC and $30 million for tech incubator Science Inc., both in Santa Monica.

“While the amount of venture capital was down in L.A. for the quarter, it was a little surprising because we see a lot of positive signs for long-term growth,” said Rod Werner, managing director of technology and venture capital banking at City National. “Silicon Beach, in particular, has become a strong market. It’s more organized than it used to be and we’re seeing more venture capital firms locating there.”

Werner also noted that the City National report does not include seed funding from noninstitutional investors such as angels. In a young tech economy like L.A.’s, these donors can play an important part of the funding process for startups.

The decrease in funding across Los Angeles is in line with the national trend. The quarterly Moneytree report from PricewaterhouseCoopers LLC, which uses data from Thomson Reuters, said venture capital investments during the most recent quarter fell 12 percent nationally compared with the previous quarter. Biotechnology investment took the largest hit, dropping 33 percent for the quarter to $875 million.

Opportunities in software and entertainment companies remain strong, according to both reports, which is an encouraging sign for L.A.’s tech scene. Locally, the first quarter of the year saw continued interest in the online video industry; YouTube networks StyleHaul in Hollywood and Tastemade in Santa Monica both attracted seven-figure deals.

The prevailing wisdom within the tech community is that consumer apps have fallen out of favor. However, the Westside was home to an outlier that was able to attract a big investment: Messaging app Snapchat in Venice, which has built up a following among a young audience, raised $13.5 million in February.

Werner stressed that it’s still too early in the year to draw any long-term conclusions about a continued decrease in venture capital investment.

But for many of the newest startups, especially the ones coming out of the accelerators, the drop in funding is palpable.

“Anecdotally, it’s a much tougher funding environment than it was nine to 12 months ago,” said Erik Rannala, who runs Santa Monica accelerator MuckerLab.

The tightened purse strings don’t mean raising money is impossible. Instead, Rannala is advising the companies to be prepared for a longer slog through the funding rounds than it used to be.

“The good companies that have strong fundamentals and revenue streams will still be able to raise money,” he said. “But it might take a little bit longer.”