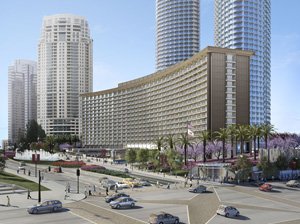 After three years of heated back-and-forth between the developer, community groups and preservationists, a sweeping new plan that strikes a compromise was quietly approved by the Los Angeles City Planning Commission recently. Barring unforeseen opposition, it is expected to pass the City Council this fall.

Developer Michael Rosenfeld plans to keep the crescent-shaped hotel but extensively renovate it. He will add two condo towers behind the hotel.

The approved plan is a dramatic reimagining of an earlier proposal, which would have razed the hotel and built two large towers that included 100,000 square feet of office space. The office space is now gone.

“I think the project is better than what we initially conceptualized, which just proves that the collaboration of the various groups can result in a win-win situation,” Rosenfeld said. “It’s truly honoring the past, embracing the future and meeting the goals of the community.”

Rosenfeld’s company, Woodridge Capital Partners of Los Angeles, and financial partner D.E. Shaw Group of New York, bought the 726-room hotel at 2025 Avenue of the Stars for $367 million in 2008.

The developers want to build 353 luxury condos in two matching 46-story high rises and on the top five floors of the existing hotel. That means the renovated hotel would be reduced to 394 rooms and suites.

In addition, nearly 105,000 square feet of shops and restaurants will be built in new and renovated space in various parts of the site.

Developers did not specify a cost of the project. However, $2 billion was the estimated cost a little more than a year ago, but that was for a somewhat larger project.

The original hotel structure, designed by Minoru Yamasaki, a renowned architect who also designed New York’s World Trade Center, has established itself as a modern landmark since its 1966 construction. Bob Hope hosted its opening charity gala, and guests have included Ronald Reagan and international figures such as Marshal Tito, Moshe Dayan and David Ben Gurion. At the urging of preservationists, it was added to the National Trust of Historic Preservation’s list of “endangered historic places” in 2009 in an effort to prevent its demolition.

The new redevelopment plan, designed by architecture firms Pei Cobb Freed & Partners and Gensler, sailed through last month’s planning commission meeting with no one speaking against it.

Michael Eveloff, president of the Tract 7260 Homeowners Association, which abuts the project, said that the 650 homeowners he represents as well as roughly 5,000 other homeowners who are part of a large coalition support the project after years of discussion.

“The opening line of my comments (to the Planning Commission) was, ‘Usually when you have a homeowner here they are opposing the project, but in this case I’m here to do the opposite.’ It looked like they got hit by bolt of lightning,” he said of the commission members’ reaction.

Concerns about traffic congestion were allayed by the elimination of the office space, which had been planned for the towers, once envisioned to be as high 50 stories. The homeowners associations also received a separate community benefits agreement he wouldn’t disclose, citing a confidentially agreement.

Rosenfeld is not a novice to development or hotels.

His snapped up the 57-room Colony Palms Hotel in Palm Springs for $15 million in June. He also owns the Hotel Californian in Santa Barbara and the Fairmont hotels in Hawaii and San Francisco, which he bought for $200 million in May and is overseeing its $20 million renovation.

However, the Century Plaza would easily be his largest project. If approved by City Council, it will likely break ground in 2014 and be built during at least five to six years.

Renovations would update the hotel rooms and suites on the lower nine floors and 63 condos on the top five. The large ground floor ballroom would get extensive renovations. Also, the developer will renovate a meeting space, a 14,000-square-foot fitness center and 11,000 square feet for restaurants and shops.

Also set for extensive changes would be the front of the hotel, where ground floor glass walls would be removed, creating a breezeway. And the sunken plaza in front would be filled in and two restaurants totaling 5,000 square feet constructed there. Plans call for nearly 89,000 square feet of restaurants and shops to be built in the rear, in structures separate from the two high rises.

About a year after the hotel renovation begins, Rosenfeld plans to begin construction of the two condo towers where the pool and other outdoor space is now. The pool would be moved to the roof of the hotel and another pool for condo residents is planned for a roof of one of the towers, according to Mark Armbruster, an attorney who represented Rosenfeld.

The towers would include 145 condos each and additional housekeeping rooms. Construction is expected to take about three and a half years. The plan also includes two acres of public plaza and courtyard space.

The hotel likely will stay open during most of the construction, but may need to close for some of the work. Rosenfeld said he hasn’t determined how long that may be.

Hyatt Hotels Corp., which was installed as its operator in 2005 when Sunstone Hotel Investors Inc. of San Clemente bought the hotel for $293 million, will remain.

The Los Angeles Conservancy and the National Trust for Historic Preservation, which fought against the hotel’s demolition, is pleased with the current redevelopment. Conservancy Executive Director Linda Dishman commended Rosenfeld for his willingness to work with her group and to find a way to keep the historic structure.

“They’ve shown vision and creativity in revising their project in a way that not only saves the historic hotel building, but celebrates it as its centerpiece,” Dishman said in an e-mail. “This project exemplifies the fact that development and preservation are not mutually exclusive.”

However, there remains the challenge of selling the condos in the market, which has attracted several other high rise residential projects.

Westfield Group, which owns the outdoor mall across the street from the Century Plaza, plans to build a 39-story residential building steps away and JMB Realty Corp. wants to build a 37-story condo tower

What’s more, some already completed projects have had difficulty moving units in the slow housing market.

Related Cos. built the ultra-luxurious Century condo project next door in 2009. The 42-story tower, designed by Robert Stern, still has to sell out its 140 units. Also selling slowly is the Carlyle, a 24-story condo tower on Wilshire Boulevard that Rosenfeld started but sold off early in construction in 2007 to Elad Properties.

Rosenfeld believes that by the time the Century Plaza condos are for sale, the real estate market will have recovered enough to absorb more luxury condos.

Prices have not yet been disclosed, but with residents having access to hotel amenities such as room service, they could be commensurate or higher than the other new luxury condos. The Carlyle has a 3,535-square-foot unit currently listed for $3.9 million, or about $1,100 a square foot.

“We’ve had a long history of condos that have not achieved or exceeded their sales expectations,” he said. “Everything has been languishing on the market. They get into price ranges where you can buy a nice house.”

However, Bill Witte, president of Related California in Irvine, a unit of Related that developed the Century, said the new project may improve prospects for all the condo developments.

“We’ll have to see how this unfolds but to the extent he’s adding some retail, that’s probably a plus for our homeowners,” Witte said.

“Even assuming this is approved as proposed, the ultimate cost and sales would be sufficiently far out in the future that it’s not competition for the Century.”