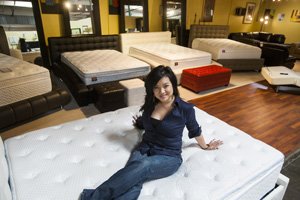 Each new incident seems more frightening than the last. But in that environment, executives at Nova Lifestyle Inc. in Commerce see a big opportunity. They plan to play off Chinese consumers’ distrust of domestic products to market a new line of American-made luxury mattresses.

The company, which for years made furniture in China for distribution in the United States and Europe, this month will start exporting latex foam mattresses made in Commerce for sale in its Chinese retail stores. Nova President Tawny Lam said a key selling point for the mattresses, priced between $4,000 and $5,000, will be that they aren’t made in China.

“It’s most important that we show it’s been imported from the U.S. so those speculations (similar to) tainted milk will not be associated with us,” Lam said. “We’re going to show the authenticity. We’ll show customs clearance forms.”

But Nova says fear isn’t the only driver. The company also is trying to cash in on the large and growing Chinese market for foreign luxury products. Fashion brands such as Ralph Lauren and Prada have seen sales growth there, and other companies are clamoring to expand into that category.

Ford Motor Co. last week announced it will bring its Lincoln brand to compete with BMW and Mercedes-Benz in China’s luxury vehicle market, which is expected to grow larger than the domestic luxury market by 2020.

Indeed, Nova executives say they hope high-end mattresses will be the first of many American-made products the company will sell in China as that country’s middle and upper classes continue to grow.

“In Asia, mattresses have always been very firm, like a wooden bench,” said Lam, who was born in Vietnam. “When Chinese think of plush comfort, they think of America. So why not bring in something from America?”

Nova is the combination of two 20-year-old companies: Nova Furniture, a Dongguan, China manufacturer with a network of 100 franchised retailers, and Diamond Sofa, a Commerce distributor and furniture brand that was one of the Chinese company’s first buyers.

Nova went public through a reverse merger, first buying a Nevada shell corporation in 2009 and two years later acquiring the parent of Diamond Sofa, founded by Lam and her husband.

In 2011, the combined companies had sales of $42 million, mostly in China, the United States and Europe, and reported profits of $5.4 million. Sammy Ho, Nova’s chief financial officer, said he hopes to increase sales to at least $55 million this year and to get Nova’s stock listed on the Nasdaq exchange by the second quarter of next year. Shares are now traded over the counter for less than $3.

In the past year, Nova raised $5.6 million in two private placements and secured a combined $8 million line of credit from banks in China and the United States. The company is using that capital in part to fund a new Chinese factory that will produce low-cost furniture for Ikea International Group in that country.

But Ho said selling American-made luxury products in China is a key part of the company’s long-term strategy.

“The standard of living in China is rising very rapidly. People have money and the first thing they will spend it on is their home,” said Ho, who has his office in Macao. “The government is encouraging people to buy appliances and furniture, and Chinese people like the imports rather than locally made products. They feel much better about them.”

Most Chinese consumer scares have involved food and toys, but Chinese mattresses have occasionally made headlines, too. Dutch retailer Beter Bed Holdings N.V. in 2007 recalled 1,300 Chinese-made mattresses after discovering several hundred of them had been sprayed with poisonous insecticide.

Nova’s latex foam mattresses, which will be sold through the company’s franchised stores and branded as Nova LatexSleep, are manufactured in Commerce by Maxim Mattress, a company owned by Lam’s family that was not acquired by Nova. Lam said sales staff will show customers documents that list the chemical makeup of the latex foam used in each mattress and the regulations the company says it will follow in manufacturing them.

Ryan Trainer, president of the bedding trade group International Sleep Products Association in Alexandria, Va., said the United States has the world’s toughest mattress regulations. For the most part, those regulations require that mattresses be flame-retardant.

“We’re able to protect the bed and protect consumers without putting harmful material into the foam,” Trainer said. “I don’t know of anybody that has anything more stringent.”

Because it will sell the mattresses in China, Trainer said Nova does not have to follow U.S. safety regulations, but rather the more lax Chinese rules. But Lam said Nova will make its mattresses, and eventually other furniture, to U.S. standards as a selling point.

“We’ll show the ‘American Made’ label and the certification of regulations and standards,” Lam said. “We’ll be very discloseable in our product.”

Nova is not the only local mattress maker to sell its products in China. Earl Kluft, owner of E.S. Kluft & Co. in Rancho Cucamonga, sells there under the Aireloom name, a luxury brand his company acquired in 2004.

Kluft warned that it could be difficult for Nova to break into the luxury market. Without the Aireloom brand, he said it would be much more difficult to sell his mattresses, which retail from $2,000 to as much as $70,000.

“They want a label they’ve heard of. Without that, I think it’s a long and difficult road,” he said.

What’s more, there has been a reported backlash against conspicuous consumption amid the slowing economy and a spate of scandals involving the wealthy government elite.

Indeed, Burke, the retail consultant, said China’s big spenders who have typically wanted to display their wealth by buying the biggest and best name brands are branching out into lesser-known brands with reputations for quality.

Lam said Nova is not relying on the top of the luxury market. Its American-made mattresses, with prices topping out at $5,000, will appeal more to China’s growing upper middle class, rather than to the ultra-wealthy who might buy a $20,000 mattress from an established luxury brand.

The lower price point should also make Nova mattresses less appealing to the counterfeiters and copycats who have flooded China with fake Louis Vuitton handbags and counterfeit mattresses that Kluft said look just like his Aireloom models.

“You can never avoid a knock-off,” Lam said. “But am I confident we won’t get copied? As long as we stay ahead of the game and as long as we don’t have such a high price point.”