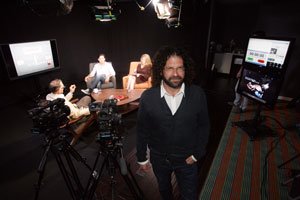 Michael Lustig at the TheLip.TV’s studio in Beverly Hills. Photo by Ringo Chiu.

The average online video now clocks in at just six-and-a-half minutes. But a handful of L.A. digital studios are placing their bets that attention spans can be stretched much further.

They’re making lengthy online talk shows and have had varying degrees of success: Some are attracting hundreds of thousands in advertising dollars while others are just trying to draw a crowd.

But the companies are all hoping that when Internet-connected TVs become more commonplace, their shows will be the beneficiaries of an explosion of viewers – and ad dollars.

With that in mind, TheLip.TV in Beverly Hills is searching for its first hit from a slate of four talk shows that cover topics that include independent film and winemaking. The shows can go on for more than an hour and Michael Lustig, TheLip founder, said he will launch two more long-form productions in coming weeks. He’s especially enthusiastic about the flexibility of the medium. The length of the show is not a big factor.

“If there’s a great conversation, we let it go,” Lustig said. “They’re not constrained by a few minutes.”

But getting discovered online is no easy task. Most videos TheLip.TV has posted on YouTube since launching in September haven’t reached 1,000 views. What’s more, building a consistent audience around a new show can be difficult when hosts don’t keep to a regular schedule: Some are professionals whose day jobs can keep them away from the camera.

Another digital studio, ThisWeekIn Inc., an online video outfit of a half-dozen employees in Culver City, makes about $500,000 a year from selling sponsorship rights for its shows, which run between 30 and 90 minutes and examine companies and business trends.

Lustig’s idea is to gather his audience and attract brands that will sponsor the episodes that cost between $2,500 and $5,000 to produce. TheLip.TV had about 113,000 total views on YouTube as of May 16 and Lustig said he’s in talks with his first sponsor.

He used about $500,000 he raised from angel investors toward renting a Beverly Hills studio and buying equipment. Some of the cameras purchased were secondhand. The first shows were shot against a bare black background, in a style Lustig calls “Charlie Rose.”

His initial slate included “BYOD: Bring Your Own Doc,” a show about independent films and documentaries. Another show, “Media Mayhem,” hosted by Century City attorney-turned-journalist Allison Hope Weiner, features interviews with people in the media.

But he’s already had to cancel one of his original productions – a parenting show called “TIP: The Intentional Parent,” that never caught on with fans. The show came to an end in March when the host decided to promote her book instead.

Jason Calacanis, tech entrepreneur and co-founder at ThisWeekIn, said keeping on-air talent is his biggest challenge at the network, which launched in 2010 and has about 10 million overall video views on YouTube.

Shows such as “This Week in Social Media” and “This Week in Venture Capital” haven’t aired a new episode in months, and Calacanis said it’s due to the challenge of getting his hosts to commit. For example, Mark Suster decided to focus on his main career at Century City venture capital firm GRP Partners for the time being.

“We are being flexible about the frequency of shows with the A-List talent. If they want to do 10 a year or 40 a year we will accommodate both in this experimental time,” Calacanis said in an e-mail.

TYT, which is credited with pioneering and popularizing web talk, is the genre’s success story. The show “Young Turks” started as a satellite radio talk show in 2002, moved to YouTube in 2005 and has been growing its audience ever since.

Steven Oh, chief operating officer at TYT Network, which employs 21 people, said the network’s advantage is that it already has a following. The new channel has about 1.5 million total YouTube views.

“The YouTube landscape is changing quickly,” Oh said. “There are established winners and it’s getting easier for the winners to get bigger. It’s very difficult for those starting from scratch right now.”

Oh said all of this year’s Town Square ad revenue will go toward repayment of YouTube’s investment. When that is paid off, likely next year, the network and YouTube will split ad revenue.

Lustig is aware of the challenge of starting from scratch, but said that he hopes to grow his programming to 10 shows and have hundreds of thousands of views per month by next year. He acknowledged that web success is rarely immediate.

“It’s not going to happen overnight,” he said. “That’s the difference between TV and the web.”