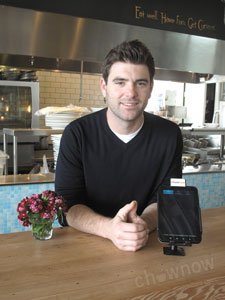 You’ve always been able to call a restaurant to order a takeout meal. For a time, maybe you faxed an order from the office. Then you e-mailed. Now, a Santa Monica startup has a product that lets customers order from their computer, smartphone or tablet.

And not only does ChowNow allow diners to place pickup orders, but customers pay online via a website or Facebook page. When a customer orders, ChowNow’s tablets ring and flash at the restaurant. A few minutes later, the customers can walk in, pick up their food and go.

The service is already available in restaurants around the country, including about 20 in Los Angeles including Bodega Wine Bar, SeaSide Grill, Zelda’s Corner, Gaetano’s and Centanni Trattoria. Restaurants pay a one-time fee of $199 per tablet and $89 per month for services.

There are competing sites that perform similar functions, but ChowNow does not ding diners with a surcharge. It also does not charge the restaurant a percentage of the order, which can make the service cheaper.

Chris Webb, ChowNow’s chief executive and co-founder, started the company one year ago. It has 13 employees and is about to leave LaunchpadLA startup accelerator in Santa Monica. Webb, who spent six years as a restaurant investor, saw that big chains were using technology to build business, so he thought that smaller restaurants should be catering to customers who are accustomed to using technology, too.

In fact, he said, “the larger mission for the company is to level the playing field with technology – to have technology any restaurant can use and afford.”

ChowNow recently scored a coup with the hiring of John Martin, former national director of sales at online reservation site OpenTable. Martin brought three colleagues with him and ChowNow hopes they will help the company expand nationally.

Carlo Sakaian, manager of SeaSide Grill, has used ChowNow for four months. He said that he prefers ChowNow over other ordering services.

“It rings, tells you the order with all the information, then you answer them back on the iPad,” Sakaian said.

But he said the service hasn’t really boosted his business, so the restaurant also still uses competitor sites.