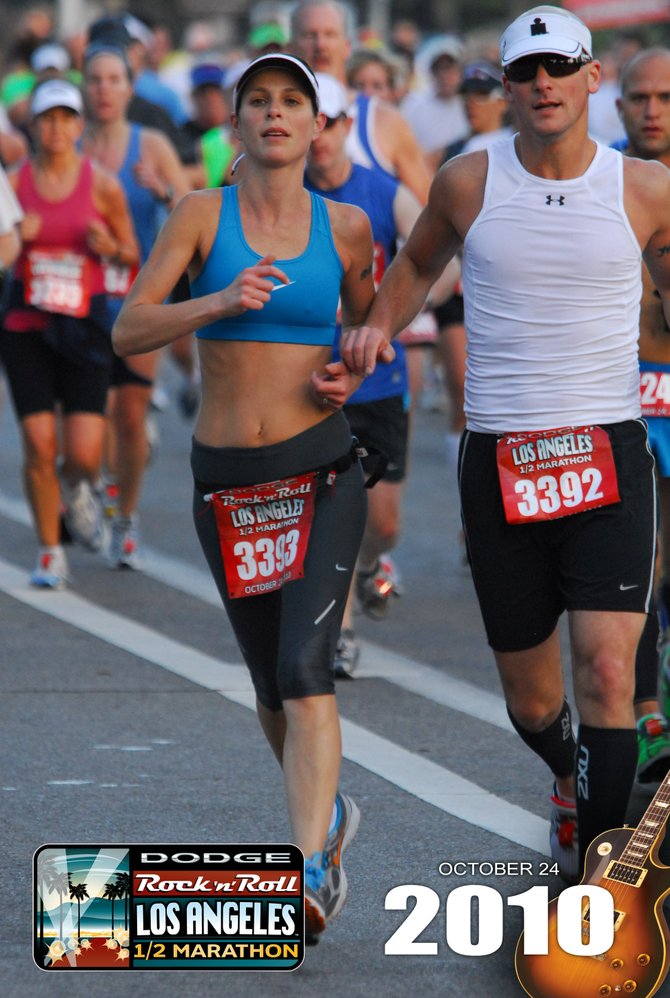 This month’s L.A. Marathon was Roi Shleifer’s fifth 26.2-mile race, but in another way it was a first for him and his wife: They finished the marathon together. Sort of.

The senior managing director in real estate brokerage Studley Inc.’s downtown L.A. office had been training for the March 18 race with his wife, Penny, but hadn’t planned to run it side by side. At the start, Shleifer, a triathlete training for the Iron Man Triathlon this fall, wanted to beat his personal best of 3 hours and 45 minutes but said he hit “the wall” early on.

“I knew I wasn’t going to make the time I wanted,” Shleifer, 39, said. “The one thing that kept me running was my wife.”

So the couple proceeded to run the rest of the race together, until the very end … almost.

They both finished at 3 hours and 53 minutes, but her time was 40 seconds faster.

“I just let her go; I said just go a quarter-mile to the end and just run. She was having such a wonderful race,” he said.

She shaved 26 minutes off her previous best time; Shleifer ended the race on a high note, too.

“There’s no happier place in the world than the finish line,” he said.

Gabriele Gresta recently moved his social-TV tech company from Italy to Santa Monica to bring the firm closer to the center of the entertainment world.

But the move had the added benefit of allowing Gresta to go unnoticed in public.

That’s because the 40-year-old tech entrepreneur is still recognized in his native country as a member of Mato Grosso, a techno and dance pop group that toured Europe in the late 1980s and early ’90s.

Gresta said it all started when he was about 16 and started practicing the moonwalk at his parents’ country house outside of Florence. He remembers sharing the space with ducks and other farm animals.

His break came when he was spotted by a music producer while dancing at a local club. By 18, Gresta was recording music and touring with the group.

Even though Mato Grosso broke up in 1995, one part of that prior life is still with him. His nickname from the group is now the name of his company, Bibop.

Charles “Chuck” Miller, who died in November at 83, was known in L.A. business circles as the longtime chairman and chief executive of Avery Dennison Corp. But he was also well known – and admired – in the local sports world.

“Orel Hershiser lived just down the block from us and knew how much Chuck loved the Dodgers, so he sent Chuck a signed photo after the Dodgers won The World Series,” said Carolyn Miller, his widow.

So the Los Angeles Sports Council gave Chuck Miller its first John C. Argue Award, which recognizes a person who has made contributions to the business of sports locally. Carolyn Miller accepted the award during the Sports Council’s annual dinner March 15 at Club Nokia at L.A. Live.

Chuck Miller was part of the executive committee for the 1984 Olympic Games. Later, he helped establish the LA84 Foundation, which supports youth sports programs in Southern California. Business and sports always seemed to intertwine for him; he was chairman of the Los Angeles Area Chamber of Commerce in 1988, the year the Lakers and Dodgers won world championships.

One of Carolyn Miller’s fondest memories was of the 1994 Women’s World Cup Finals held at the Rose Bowl.

“There were men and women cheering for a great sporting event,” she said. “Chuck appreciated that men and women were acknowledged in sports equally.”

Staff reporters Jacquelyn Ryan, Jonathan Polakoff and David Nusbaum contributed to this column. Page 3 is compiled by Editor Charles Crumpley. He can be reached at ccrumpley@labusinessjournal.com.