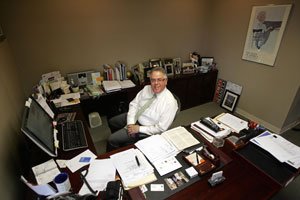 The photos in Hal Dash’s office shows him posed with politicians – all Democrats – including the Clintons, Al Gore, James Hahn, Antonio Villaraigosa and Nancy Pelosi. One photo shows Dash with Joe Cerrell, the late chairman of the California Democratic Party, who founded Cerrell Associates in 1966 and turned it into an L.A. powerhouse lobbying and political campaign firm. Dash was working as a radio reporter at KHJ-AM (93) when he got to know Cerrell in the 1970s. He joined the firm in 1977 and rose to become chief executive when Cerrell retired in 2006. By his own admission, he’s less of a political animal than his predecessor, so Dash has moved the company into energy and real estate development lobbying. He met with the Business Journal in his Larchmont office to discuss his days as a radio reporter in the ’70s, his staging of a duct tape wedding, and his memories of calling basketball games when Julius Erving played in college.

Question: What was the best publicity stunt you ever produced?

Answer: Sometime around 1999, an Ohio agency contacted us on behalf of their client Manco, the company that makes Duck Tape (a brand of duct tape). They asked us to handle an L.A. event. Long story short, we did a Duck Tape wedding.

We got Universal Studios to give us some space and then made everything from Duck Tape: the bride’s dress, the groom’s tuxedo, the wedding canopy, flowers and the red carpet. It was like the Rose Bowl with tape instead of flowers. It was so much fun and we got great media coverage.

Who was your favorite client?

Jack Lemmon. He was a prince – nice, smart – just like he is on screen. One time we wrote public testimony for Jack Lemmon and, of course, his delivery was fabulous.

What was the project?

The residents of Tower Road in Beverly Hills had a problem because the Sultan of Brunei – the richest man in the world at the time – wanted to build a megamansion. On this little windy road, he wanted to put up a place with 43 rooms, tennis courts and a movie theater.

Fred Rosen, the man who started Ticketmaster and later sold out; Stu Ketchum, a big guy in the YMCA movement; Sidney Sheinberg, an executive at Universal and his wife, Lorraine Gary, who was in “Jaws”; Jack Lemmon was there, too.

How did you handle the issue?

We launched a campaign to get signatures on petitions in Beverly Hills and we attended community meetings. When the issue went to the Planning Commission, we had hundreds of people on the lawn outside City Hall. We brought in trucks and fed them. That’s when Jack Lemmon delivered his testimony. When you have big celebs, it’s easy to grab attention.

Did other celebrities come forward?

That night some of the supporters recruited their friend Jay Leno to help. He lived nearby on Tower Road. After taping “The Tonight Show,” he tooled up on his motorcycle. I met him at the door and handed him some talking points. He scanned it for a minute and gave it back to me, saying, “I got it.” When he walked in, heads turned. He was brilliant and the project was killed.

What was your first job?

I grew up in Springfield, Mass., a nice New England town. My first job was as a disc jockey on the closed-circuit sound system in a nearby Veterans Administration hospital. I loved radio, both spinning the records and announcing news.

What was the next step in your career?

I graduated from high school in 1966 and went to the University of Massachusetts at Amherst. I really wanted to play on the radio. I had a jazz show on the college radio station because I loved jazz even in the midst of the 1960s rock revolution. Also, I did play-by-play for baseball and football.

Did that lead to a job?

Well, I went to graduate school and got a master’s in communication. I did TV and radio production, and I taught film history at the undergraduate level. I also did color commentary during basketball games for a local radio station while I was in graduate school. That was the year Julius Erving was at U Mass, so I got to call his games. It was pretty exciting.

When did you come to Los Angeles?

My mother decided to move to California in 1972. I had never been to California, so I thought I’d give it a shot for a few months. We had family in the San Fernando Valley.

She’s living in Santa Clarita not far from where I live, still driving her car and going strong at age 88.

What did you do when you got here?

I figured I had a degree and experience, I’d have no problem getting a job in radio. Well, it’s not so in the big city. I ended up selling cameras in a chain store for a few months.

Were you married at the time?

No, I met my wife out here on a blind date. She’s a Lakers fan; I’m a Celtics fan. Opposites still attract after 37 years.

I finally got a call from RKO Radio, specifically KHJ, the old rock station on Melrose. I spent five years there as a news editor and field reporter. It was a lot of fun.

What made it fun?

How did you meet Joe Cerrell?

I had my own talk show and interviewed John Lennon, Elton John and other rock stars who came through the station. Sometimes Joe Cerrell would bring political guys to the studio. Hubert Humphrey, Pat Brown, George Mosconi, Joe Alioto, members of Congress, all those folks.

Did you ever interview Cerrell?

Yes, because after a while, we used Joe as a political commentator. Nowadays everyone is a commentator, but in those days, consultants didn’t appear on radio and TV. He provided insights on the Democratic side and we had another on the Republican side.

How did you get into public relations?

Radio was great but it got repetitive so I quit. I was looking for a new job and I called Joe. They had an opening for someone to write press releases, so I said, “Let’s give it a shot.” That was the turning point of my career.

Do you regret leaving radio?

It was never the most secure job – you live and die by ratings. I had done everything I could. It was time to change.

Any worries about making the jump to a new profession?

One of my big apprehensions was “going to the dark side,” as journalists called PR back then. But my PR career started in 1977 and it’s still going strong with no signs of letting up. I’ve had bad days – everybody does – but there’s never been a day when I didn’t want to come to work. When you repeatedly get out of bed and say, “Do I have to go to work?” it’s time to change your profession or your job. That’s never happened to me.

Were there any surprises?

I was outgoing. We were both baseball fans. He loved the Yankees; I loved the Red Sox. I’m a bit of schmoozer. Of course, Joe was king of the schmoozers so I learned from the best. We just hit it off.

How did you become CEO?

In 2006, Joe sold the company to the management team. I had been president since 1985 and run the day-to-day operations. I learned from him about running the business. It was a gradual transition after 2006. We ran the operation as Joe started slowing down until his death in December 2010. That period was good grooming.

What do you remember about Joe’s work style?

He worked seven day a week. He wasn’t a big sports guy – had a boat but never used it. Not a big reader. But he taught me how to run the business because he loved this place.

Why is his name still on the shingle?

Joe had such cachet and a great reputation. The name is part tribute to Joe and Lee as people, but also what the stood for: Integrity, candor, a winning tradition and hard work.

Was Democratic politics as big a part of your life as it was for Joe Cerrell?

No. Joe grew up in a very political household. His father was a Republican but a strong union guy. His mother was a fierce Democrat – New Deal, Roosevelt, the whole deal, so Joe was political from his days as a campus radical at USC. My family was not terribly political and neither was I. In terms of my career, I would say I grew into politics. But Joe was born into it.

Who are your heroes?

Who is your favorite writer?

David Halberstam. From “The Best and the Brightest” to “Summer of ’49,” he was the best chronicler of the American experience in the second half of the 20th century.

What’s your favorite story from your career?

One day Milton Berle came to RKO. I popped into the green room, where he was getting ready for a TV interview, to get a sound bite for radio. He had finished his makeup and was all alone. I asked for an interview and he yelled, “What do you want, kid? Sure, I’ll give you an interview but I need to go to the bathroom. Where is it?” I told him, “All the way down the hall.” He said, “Forget it. Close the door.” He went in the sink, washed it out and gave me the interview. It shows you that legends do what only legends can do.

What were the best moments of your life?

One year my wife sent me to Red Sox fantasy camp. Every day we played baseball, interacted with Red Sox players and coaches. It was the most fun I ever had. Also, when I turned 60, a friend of mine put the announcement on the Jumbotron in Fenway Park during a Red Sox game.

Personal: Lives in Santa Clarita with his wife, Gail. No pets due to Dash’s allergies. His son, Scott, works as an attorney in Washington, D.C.