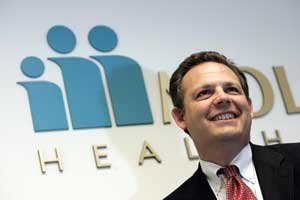 J. Mario Molina, the former chief executive of Molina Healthcare Inc. and son of the company's founder who was removed from his position in May. Photo by Ringo Chiu.

On the evening of June 6, Molina Healthcare Inc. reported that a new expansion in Texas was costing far more than expected, plunging its stock 31 percent. But after the June 7 closing bell came more big news: The company had won back a huge contract in Ohio and shares jumped 24 percent.

It’s been that kind of year for the Long Beach managed care provider, which has been dealing with growing pains and wild ups and downs in the rapidly expanding and sometimes unpredictable Medicaid managed care business.

“It’s been a volatile time,” said Chief Executive J. Mario Molina. “I think there are a couple issues that are specific to us, but if you look at health care stocks generally, this past year has been unusually volatile.”

Molina specializes in operating Medicaid HMOs, which take a set payment from the state to deliver health care to low-income patients. It also operates Medicare HMOs for elderly patients.

Opportunities are booming as cash-strapped states increasingly put managed care contracts out to bid, shifting away from directly operating Medicare and Medicaid in an effort to rein in costs. Molina has won and lost big contracts in recent months, some accounting for as much as one-fifth of its premium revenues.

What’s more, the industry is poised for even bigger growth. Federal health care reform under the Affordable Care Act, if it survives, would add 16 million people to the Medicaid rolls. The federal government is also pushing to place the most expensive patients – dual-eligible patients who qualify for both Medicaid and Medicare – into managed care. Some analysts project that Medicaid managed care could grow by more than $100 billion in the next five years.

But Molina’s moves to ride the industry expansion have run into snags. In Texas, where the company won a contract potentially worth more than $600 million annually, costs have run higher than expected. And in Idaho, a newly acquired claim-processing business has struggled with major glitches, causing Molina to sue the company that sold it the business.

“Any new market can represent a challenge because you don’t have experience in it,” said Joseph France, an analyst at Cantor Fitzgerald LP in New York. “They’re not alone in having difficulties. But it may be in part because revenues have increased 30 percent for the last 18 months and it represents enormous business in relation to the size of the business.”

Founded in 1980 by Dr. C. David Molina as a small Long Beach medical clinic to treat uninsured or low-income patients, Molina is a longtime player in the field. Molina died in 1996. Today, sons J. Mario and John Molina, the chief financial officer, run what is now a Fortune 500 company operating HMOs in 10 states.

Much of the growth has been recent. First quarter revenue this year was nearly $1.4 billion, up more than 40 percent from first quarter 2010. Annual revenue has nearly doubled since 2007, and the company is profitable, earning $20.8 million last year.

More states are converting to managed care from a fee-for-service model, in which doctors and hospitals are paid directly by states. With managed care, companies such as Molina take a set amount to pay for care for a population of patients, making it easier for states to budget but leaving the companies at risk if expenses exceed projected treatment costs.

In the last year, Louisiana, Texas and Kentucky have converted some or all of their Medicaid programs to managed care. Nebraska is expanding Medicaid managed care from 10 to all 93 counties July 1. Kansas, Florida, Georgia and Illinois are moving to expand managed care in the coming years.

Competition among companies for this new business has been fierce. In the last year, Molina scored a big contract in Texas and held on to business in Washington state, but lost previously held contracts in Missouri and Ohio to competitors. The contract decisions in those latter states became the subject of legal challenges by Molina. Its Missouri case was thrown out, but earlier this month, it was able to win back its Ohio contract, which accounted for some 20 percent in revenues.

Even when it has secured contracts, not all has gone smoothly. With its new contract in Texas, Molina more than doubled the number of its patients beginning in March. But many of its new members ran up unforeseen costs on expensive long-term care services such as adult day care and personal attendant services.

In some areas, costs were 20 percent higher than premium revenues. The problems caused the company to pull its full-year earnings guidance of $1.75 a share earlier this month. It has not yet restated any guidance.

“It was absolutely an example of growing pains,” said Thomas Carroll, an analyst at Stifel Nicolaus & Co. in Baltimore. “That was a region that never had managed care before, and sometimes expectations don’t align with what happens.”

A move to expand into Medicaid claim processing also ran into trouble. In early 2010, Molina bought a unit of Blue Bell, Pa.’s Unisys Corp. for more than $130 million, adding nearly 1,000 employees and taking over processing of payments to doctors, hospitals and other providers in six states.

But claims-processing operations in Idaho were problematic. A system test there accidentally sent out $3.2 million in undeserved payments. Once the system went live, technical problems disrupted payments to providers, forcing the state to issue more than $100 million in interim payments. Some health care providers went without any payments for nearly two months and a few reportedly went out of business. Major problems weren’t resolved for six to eight months, and the company wasn’t paid by the state for more than a year due to the fiasco.

“The acquisition has been less successful than investors had hoped for,” Carroll said. “I think the company didn’t quite realize what it was getting into.”

Last month, Molina filed a lawsuit against Unisys in Los Angeles Superior Court. It claims Unisys misrepresented that its systems were ready, and Molina was forced to spend tens of millions to fix problems and could be held liable for more.

Unisys has not responded in court. The company issued a statement that said the allegations in the lawsuit are without merit.

All the problems have taken a toll on the stock, which is down nearly 15 percent over the past 12 months despite the company’s growth. Shares closed at $22.84 on June 20.

Molina executives characterized the problems in Texas and Idaho as temporary and transitional. They also pointed out that Centene reported similar problems with the cost of new patients in Texas.

“I think given the circumstances we did as well as you could,” CEO Molina said. “Those kinds of large implementations always have problems.”

The problems in Idaho have mostly been solved. Beginning in March, the state has been paying Molina its full rate, said Tom Shanahan, a spokesman for the Idaho Department of Health and Welfare.

Molina executives said that the issues in Texas can be fixed, and that they expect that state officials there could set higher rates to offset the unexpected costs as early as Sept. 1.

Despite the bumps, big growth is in the company’s future plans. Molina said the company is eyeing potential new contracts in Illinois and Georgia. The company also won a contract in April to run a pilot program for dual-eligible seniors in San Diego County.

The company estimates that the expansion of Medicaid under health care reform could double the company’s business. But even if the law is struck down by the U.S. Supreme Court (where a decision is expected soon on the law’s constitutionality) there will still be plenty of growth opportunities as the population ages and states seek to keep a lid on rising health care costs.

“One of the things I’ve always told investors is this business is not linear, it is lumpy,” said J. Mario Molina. “You get these (requests for proposals) that come out periodically; you’ve got new populations coming into managed care. There’s a certain unpredictability. The thing to remember is this is a growth industry right now, and it’s going to be that way for several years.”