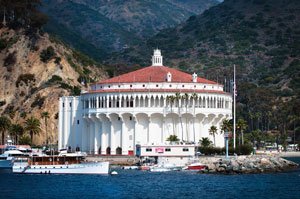 Catalina Casino as seen from the island’s harbor. Photo by Thomas Wasper

At Catalina Island’s Descanso Beach Club, guests can rent a cabana, replete with fresh fruit, ice water and full-service wait staff, on a manicured, semiprivate beach. The price: $300, more than most hotel rooms on the island.

Still, for most weekends this summer, all 17 cabanas, and many of the nearby $75-a-day chaise lounges, are already booked. For anyone who hasn’t been to Catalina in a while, that may sound surprising, but it’s evidence that the island is finally coming back after a long decline.

Since 2008, high-end offerings such as the beach club have been the focus of the Santa Catalina Island Co., which developed much of the island town of Avalon over the last century and remains its largest commercial landlord.

The company has spent $25 million over the past four years to renovate hotels and create attractions, hoping to lure well-heeled visitors to Catalina, once a premier Southern California resort.

“We needed to create something new while we still had a lot of good things on the island,” said Randy Herrel, chief executive of the company. “We’ve turned around a seven- or eight-year trend.”

Catalina tourism peaked in 2000 and then slowly eroded until hitting bottom in 2009. But the number of visitors has improved in each of the past two years and is on track to hit prerecession levels this year.

While the economy has improved since 2008 and 2009, Herrel and others said the company’s new offerings, including a zip line, new restaurants and backcountry tours are the main drivers introducing the island to a new generation of tourists.

But the company’s initiative hasn’t been met with universal approval on the island, where some businesses are being pushed out by the changes and others believe moderately priced offerings should be the focus.

Either way, it’s hard to say whether the island’s boosters can re-create the glamour and excitement Catalina created in the 1940s and ’50s when visitors wore furs and velvet jackets on the cross-channel ferry ride and packed fine evening wear for dances at the iconic Catalina Casino. In the decades since, the island became better known as a stop for cruise ships and day trippers, and a haven for older tourists.

Alan X. Reay, president of Irvine travel and hotel consulting firm Atlas Hospitality Group, said the island has much more competition than it once did, with travelers easily able to hop planes to Las Vegas and California’s wine country, places both more distant and alluring.

“Before, in Southern California, it was Catalina and Disneyland and a few other things. But now, there has been a huge expansion of areas to go,” Reay said. “And there’s only so many dollars to go around.”

The island’s glamorous heyday followed its 1919 purchase by chewing-gum magnate William Wrigley Jr., who built the Casino, where gambling has never been allowed but big bands were broadcast nationwide by CBS Radio in the 1940s.

The island held its own and even attracted more visitors during the postwar boom years before visits to the island on cross-channel ferries peaked in 2000 at 739,000. By then, the island’s age and dearth of updated amenities started to show. Guidebooks said the island had few good restaurants, guests complained there was little to do at night and the central beach was often closed because of pollution from a decrepit sewer system. By 2006, while the economy was roaring, the number of ferry passengers had dropped 19 percent from the peak to 596,000. (Those figures do not include visitors who fly to the island or sail there in private boats.) The island seemed to hit bottom in 2007 when a wildfire scorched 4,800 acres and contributed to another big decline in tourism.

By then, new management that took over the Island Co. after the 1999 death of Wrigley’s grandson was already looking to shake up the company.

Alison Wrigley Rusack, Wrigley’s great-granddaughter and the new controlling shareholder of the Island Co., acknowledged the company is partly to blame for the decline in tourism.

“When (my father and grandfather) were involved with Catalina, they were running the Wrigley company in Chicago,” she said. “It was something they tried to focus on, but they were not there full time.”

Added her husband, Island Co. Chairman Geoff Rusack: “There was only so much time they could spend with the Island Co. For a long time, there wasn’t a lot of building going on. We’ve got decades of deferred maintenance.”

A few months after the fire, the company hired Herrel, a former chief executive of Carlsbad golf apparel maker Ashworth Inc. Herrel soon convinced Wrigley Rusack and the board to invest $20 million to build new attractions, upgrade its hotel and beach club properties, and restore the crumbling Casino.

Work started in 2008 and the first new offerings were unveiled in 2010. That year, the company opened the Catalina Zip Line Eco Tour. Tourists harnessed to suspended steel cables can fly nearly three-quarters of a mile through the island’s undeveloped Descanso Canyon. It also opened a diving tour, called Sea Trek, that uses weights and special helmets to let untrained divers walk through an underwater kelp forest.

Also in 2010, the company renovated the Descanso Beach Club, opened the upscale-casual Avalon Grille restaurant and overhauled its Pavilion Hotel. This year, it reopened the Hotel Atwater after extensive renovations and is building a sandwich, ice-cream and coffee shop at Descanso.

The restaurant, club and hotels are all overseen by Lubos Pech, the company’s vice president of hospitality, formerly the food and beverage manager at the posh Jumeira Beach Hotel in Dubai and the Ritz-Carlton Laguna Niguel.

Herrel said the company plans to spend at least an additional $15 million over the next few years to create even more attractions.

The new attractions and upgraded amenities are part of the Island Co.’s plan to attract certain types of visitors to Catalina: those between 25 and 54, with household incomes of $150,000 or more and with a desire for what Herrel calls “soft adventure.”

“They want Wi-Fi in their rooms and they want a private cabana where they can relax all day, but they also want to go zip-lining and hiking,” he said. “We’re providing high-quality, high service-level activities while they’re doing things they can’t necessarily do on the mainland.”

That ties in with the efforts of the Catalina Island Conservancy, a non-profit set up by the Wrigley family in the 1970s that owns 88 percent of the 76-square-mile island. It promotes ecotourism on the largely undeveloped island, including running jeep tours of the interior. In 2009, it opened the Trans-Catalina Trail, a 37-mile footpath that stretches from the Catalina’s rocky northwestern tip to Avalon in the southeast.

Herrel said the company is seeing strong bookings for its attractions. And after losing money from 2007 through 2010, he said the Island Co. was back in the black – on a pretax basis – in 2011 and is on track for a better 2012. The private company would not disclose revenue or profit figures.

The company’s plans to improve Catalina extend beyond its businesses. It is also the largest commercial landlord in Avalon, and Herrel said the Island Co. has started asking restaurateurs and retailers to improve operations as a condition of tenancy.

In at least one case, that caused a stir within the island’s insular business community. The company recently announced that a longtime tenant, Armstrong’s Fish Market and Seafood Restaurant, will close in October. Newport Beach’s Bluewater Grille Restaurant Group will take over the waterfront location and open Bluewater Avalon, also a seafood restaurant, in April.

“We are looking to help our tenants improve or bring in new tenants,” Herrel said. “We always start by working with tenants, but some don’t want to change.”

“There are still a few businesspeople on the island who think the issue is price. There’s certainly a difference of opinion,” Griffin said.

Jack Tucey, who owns several Avalon restaurants, said the Island Co. asked him to bring an upscale concept into the space occupied by his waterfront Antonio’s Pizzeria and Cabaret. He’s not interested. But he said he understands what the company is trying to do and he’s working with the company to find a new location for his pizzeria.

“We don’t do fine dining. We believe in midscale,” Tucey said. “I would look at my locations and upgrade them to a higher end if I felt that was what I wanted. But I don’t operate in that realm.”

Greg Miller, who opened the upscale Hotel Metropole in 1990, when the island had few luxury amenities, said he thinks there will continue to be demand for more wallet-friendly activities than the Island Co.’s $120 zip line or its $300 beach cabanas. And he understands why some business owners are reluctant to change.

“I don’t think you can radically change the day visitor. A lot of people don’t like to go to Descanso (Beach Club) because it’s too expensive,” he said.

However, Wrigley and Rusack said it’s wrong to think the Island Co. wants to fundamentally change the island and the tourists who visit. Rather, they said they want Catalina to be a destination for everyone, upscale and down.

“It’s about balance and having a quality experience for all walks of life,” Rusack said. “One segment has kind of dropped out a bit. We’d like to bring everybody back.”

Bringing more tourists to Catalina could be as easy as making it cheaper to get there. Catalina Express, the largest cross-channel ferry company, charged $42 for a round trip 10 years ago. As fuel prices have climbed, the fare has risen to $72.50 for adults and $57 for kids under 12. That means a family of four will pay upwards of $250 just to make a trip to the island.

Herrel some island business owners would like the company or perhaps the chamber to subsidize ferry rides to boost business. He agrees that ticket prices might discourage some tourists, though not the ones the company is now targeting.

“We don’t believe the cost is preventing our visitor from coming here,” he said. “Our new visitor coming over is not as sensitive to price as they are to quality and service.”

Reay, the hospitality consultant, said he believes the ferry is expensive to the average tourist. Still, he added, Catalina’s problems have less to do with getting there than with having enough to do on the island.

Even with the new attractions, Catalina will continue to have a hard time competing with the breadth of activity offered in Las Vegas, San Diego and other destinations.

Restaurants are a prime example, he said: The company’s new Avalon Grille and upcoming Bluewater Avalon can’t compete with the dozens of upscale eateries found in wine country, Las Vegas or even Palm Springs.

Nevertheless, Reay said the company’s upscale push should address some of the problems he’s observed on the island. For instance, nighttime beach parties at Descanso Beach Club, complete with DJs and club-style bottle service, will fill the island’s nightlife void. And he said hiring Pech and other Ritz-Carlton alumni speaks volumes about the company’s intentions.

“They’ve attracted some strong, backgroundwise, managers,” he said. “If you’re in the management of the Ritz-Carlton Laguna Niguel, you can pretty much move to any property in the world.”

Bruce Baltin, senior vice president at PKF Group, an L.A. hotel consultancy, added that the new attractions should benefit Catalina, which after all, is an island.

“It’s a unique destination. When you’re there, you get a sense you’re in someplace different,” Baltin said. “That, in and of itself, is interesting.”