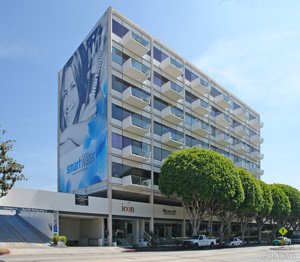 A joint venture of New York’s Angelo Gordon & Co. and L.A.’s Townscape Partners bought the building at 8899 Beverly Blvd. from a family trust, which had owned it for about 25 years.

Terms were not disclosed but industry sources estimated the value of the deal at more than $40 million. That would make it one of the largest office sales in the West Hollywood-Beverly Hills market in more than a year. Only two Class A office properties in Beverly Hills have topped $40 million since 2010.

The building, on two acres just west of Robertson Boulevard, is home to Italian restaurant Madeo and production company Don Mischer Productions. It was formerly the headquarters of talent agency ICM Partners.

John Irwin, co-founder of Townscape, said that his company was attracted to the building because it’s somewhat outdated, allowing for a renovation that can draw higher rents.

“It’s a good building in an excellent location, and we are exploring our options on it and figuring out a way to maximize its potential,” Irwin said.

This is the second acquisition by Townscape, a new L.A. real estate investment and management company led by Irwin and Tyler Siegel, both of whom worked for developer Related Cos. Townscape purchased a retail strip mall on Sunset and Crescent Heights boulevards earlier this year.

The company signed a five-year lease for 50,000 square feet at 3562-3576 Eastham Drive in the Hayden Tract area. The deal with landlord PAS Trust is valued at more than $7 million. Current tenant, auction website Bidz.com, is downsizing and will vacate the property within three months.

Maker has more than 400 online video channels with 70 million subscribers and produces hundreds of original videos a month. The company currently occupies less than 15,000 square feet in Culver City but has outgrown it over the last year. Maker plans to occupy its new space in November.

Ian Strano, executive vice president at NAI Capital in West Los Angeles who represented the landlord, said the company was attracted to the building because of its creative atmosphere with tall, exposed ceilings. Several other tenants with a creative bent also were interested in leasing it.

Maker was represented by Seth Wellisch and Matthew Miller at Cresa Partners in West Los Angeles.

UCLA’s controversial 250-room hotel and conference center passed one of its major hurdles last week when the UC Regents finally gave their unanimous approval to its business plan. But the $162 million project is far from pulling building permits.

Local hoteliers and residents who oppose the project said they haven’t ruled out filing a lawsuit to stop the development, if its design and environmental impact report receives the Regents’ final approval, as expected in the fall.

Local hoteliers have argued the campus hotel will unfairly draw visitors because of its lower-than-market room rates and exemption from having to charge visitors occupancy taxes since it would be publicly owned. UCLA contends that it’s limiting visitors to those on university-related business, though that definition is very broad and includes, for example, fans attending intercollegiate athletic events.

David Greenberg, an associate at law firm McKenna Long & Aldridge LLP who represents opposition group Save Westwood Village, said that the project’s effect on the local economy and traffic could be a basis for a lawsuit under the California Environmental Quality Act.

The group already has sent letters to the university and the authority overseeing the environmental impact review about its concerns.