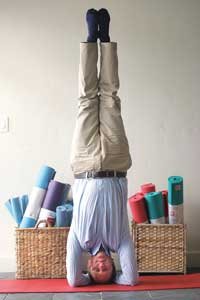 What was it like growing up in that kind of environment?

As you could probably imagine, growing up with the name Sky, I have had my fair share of being teased. My name rhymed with shy, cry, lie, all those things. As a child, what I wanted was a conventional upbringing. I’m very proud of my roots now, but as a child nobody else I was friends with was born in a teepee or was a vegetarian.

Do you have siblings?

I have four siblings, but they have very normal names. When I say my parents were hippies for a moment in time, I was certainly born in the heart of that. My sisters are Justine and Jessica, and I have two brothers, Brock and Jordan.

Where did you go to college?

I went to Stanford University for college and I majored in economics. After Stanford I went into corporate finance; I worked for an investment bank on Wall Street. For two years I was an investment banking analyst, and it was that program that really drove me to yoga, specifically.

I was working seven days a week, 12 to 15 hours a day. I often joke that everything I learned in my professional life I learned as an investment banker. But by the end of it I realized that I need to be emotionally connected to what I do. So I took a little bit of time off.

When did you start practicing yoga?

I broke my ankle when I was an investment banker, right before I left, in a boating accident in Europe. My sister said, “You should come to this yoga class.” I said, “Oh, come on, yoga’s for girls! My name is Sky, I want nothing to do with hippie culture.” But I will never forget that first yoga class.

It was so hard and my muscles were shaking and I was dripping with sweat. I was watching these people do what to me was so inspiring, like press up into a headstand. The amount of agility and sheer strength and focus and concentration it took, I was really inspired by that. So I fell in love with yoga; I started going every day.

When did you come to Los Angeles?

I moved to Los Angeles for a job in business development for a digital media company in 2001, and I asked my teacher in San Diego, “Where should I take yoga when I go to L.A.?” He said, “Well, you need to study at YogaWorks on Montana Avenue.”