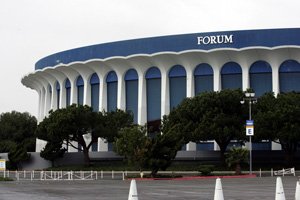 More than a year after agreeing to buy the storied Forum arena in Inglewood, New York’s Madison Square Garden Co. could finally be closing the deal – thanks to an $18 million contribution from the city.

Inglewood officials approved a loan last month to the Madison Square Garden owner, which had announced plans to acquire the Forum in 2010 before the deal stalled. The loan will be granted as long as the purchase happens by July, and the loan won’t have to be paid back if Madison Square Garden retains ownership for 10 years. The money is to help cover renovation costs.

“This is good news for the deal,” said Laura Martin, an analyst with Needham & Co. in New York, who covers the publicly traded company. “The company has been waiting for the economics to make sense. I don’t think they would have done it without that $18 million.”

The city of Inglewood wants a new Forum owner badly. The opening of Staples Center over a decade ago stole away the 44-year-old venue’s sports teams and most of its concert business, and the city has lost out on sales taxes and traffic. The arena’s current owner, Forum Enterprises Inc., a for-profit arm of Faithful Central Bible Church, has long given up plans to turn it into a family entertainment center.

“This would be a significant step towards revitalizing our economy,” Inglewood Mayor James T. Butts Jr. said.

The deal would give MSG, which operates venue in New York, Chicago and Boston, a large L.A. arena open to concerts year-round – unlike Staples, which is occupied by sporting events more than one-third of the year.

But there’s still a question whether Inglewood can succeed in maneuvering the loan around the state, which ended redevelopment agencies and basically took command of their money.

Inglewood officials agreed to move money out of the city’s redevelopment agency to the city itself a year ago, and now seek to pay the Forum loan with that money.

However, spending by now-defunct redevelopment agencies is subject to review by oversight committees and the state, which could kill the deal, said Lew Feldman, an attorney at Goodwin Procter LLP in downtown Los Angeles who reviewed loan documents for the Business Journal.

“This could likely be a test case for the changes in redevelopment law,” Feldman said. “It’s a fascinating transaction.”

Butts said that the deal is in accordance with redevelopment law, and that officials feel there’s no risk of any problems from the ongoing redevelopment shakeout.

MSG declined to provide an executive for comment, but issued a statement saying it was pleased with the loan but that “several steps remain before the project can be finalized.”

Forum Enterprises also declined comment, though a spokesman did confirm that the arena was under contract for sale.

The Forum has taken a tumble from its heyday decades ago when media entrepreneur Jack Kent Cooke, the former owner of pro basketball’s Lakers and the founder of the National Hockey League’s Kings, moved both teams to the arena after he opened it in 1967. The 18,000-seat venue hosted not only sporting events but concerts by entertainers such as Led Zeppelin, the Jackson 5 and Elvis Presley. In the ’80s, thousands of fans regularly descended to watch the Showtime-era Lakers and hockey legend Wayne Gretzky. The Forum also became one of the first naming-rights deals in sports when it changed its name to the Great Western Forum in 1988, taking on the name of a bank.

But when Staples arrived in 1999, it drew away the Lakers and Kings, and usurped the Forum as the area’s premier large concert venue. In 2000, Faithful Central bought the building with plans for an entertainment complex with shops, restaurants and hotel. Those plans never materialized.

Since then, the city of Inglewood has lost about a half-million dollars a year in direct revenues from the Forum, Butts said, and surrounding businesses have suffered from the loss of traffic. The downturn has also hit the city hard, with its sales tax take declining 17 percent between 2008 and 2010. City officials have eliminated 121 full-time positions and used more than $30 million in reserves since 2008.

MSG entered the picture in late 2010, announcing it was putting the finishing touches on a deal to buy the Forum for a reported $20 million to $25 million.

The company has a track history of boosting venues. Since acquiring the Beacon Theater in New York, the Chicago Theatre and the Wang Theatre in Boston, revenues have grown at each by at least 35 percent.

Roland Talton, president of the Inglewood Chamber of Commerce, said a revived Forum would be welcomed by local businesses.

“It hasn’t been the same,” Talton said. “We would like it to come back. I don’t know if it will ever get back to where it once was but we would at least like to see it elevated to something reasonable and respectable again.”

City documents indicate that MSG plans to spend $61 million on renovating the Forum, including reupholstering seats, new flooring and marquee, and upgraded lighting. After 10 months of negotiation, Inglewood agreed last month to give MSG the $18 million to help pay for the renovations.

With this loan arrangement, MSG gets the money up front, yet the city can seek repayment if MSG fails to meet benchmarks.

The city estimates it will make back $16 million in direct revenue over 20 years from sales taxes on tickets, parking, food, beverage and merchandise sales at the arena. The estimates do not include the higher sales taxes expected from nearby businesses.

Though the city won’t make back its money for years, the mayor said that the investment is worthy because of the boost to the local economy.

“It pencils out because you’re taking redevelopment dollars that are intended to provide revitalization,” Butts said.

But in order to pay for the loan, the city is relying on some maneuvering essentially to keep its redevelopment money out of the state’s hands. In January of last year, the city entered into an agreement in which the city’s redevelopment agency would transfer annual tax revenues of at least $15 million back to city for the next 23 years.

By July, the state passed a bill eliminating redevelopment agencies.

That law is now being implemented, and it gives the state the power to review and take back transfers of assets between a redevelopment agency and a city after Jan. 1, 2011 – which could include Inglewood’s fund transfer.

“You have a city that has accepted a tax increment from the redevelopment agency and then has subsequently, almost a year later, entered an agreement to give that money for the Forum,” attorney Feldman said. “It is unclear whether it is truly going to be enforceable.”

However, Butts said the city’s lawyers scrutinized the matter and believe Inglewood’s position is a sound one. The city acted in accordance to the law, and officials believe the state will not undo the deal.

Feldman agreed that unwinding redevelopment agency deals is new and complicated, so it’s unclear what may happen.

Still, even if the deal goes through, the renovations are mostly cosmetic. Gary Bongiovanni, editor of concert industry trade publication Pollstar, doesn’t believe the new Forum will take much business from Staples.

But Bongiovanni added that there’s demand for more large concert spaces because Staples hosts four sports teams, including the National Basketball Association’s Clippers and Sparks of the Women’s NBA. The New York market will soon have four major arenas, whereas in Los Angeles, Staples is the only game in town for large-scale concerts, aside from the faded and aging L.A. Sports Arena in Exposition Park.

“The L.A. market is probably big enough to support an additional building like that,” he said. “There are concerts that would conceivably like to play the L.A. region during time periods when sports is making the Staples Center unavailable.”

Any new business at the Forum also could help spark other redevelopment in the city.

The city has applied for federal grant money to pay for improvements to a major thoroughfare, Century Boulevard, with MSG submitting a letter in support.

Wilson Meany Sullivan, a San Francisco real estate company, is planning a $2 billion development at the Hollywood Park race track that could break ground within the next year. The project, which has received approvals, calls for nearly 3,000 residential units, more than 600,000 square feet of retail and 25 acres of park space.

“Between that project, if it happens, and what we’re doing in Hollywood Park, it signifies a major redevelopment of the whole inner core of Inglewood,” said McCallum.