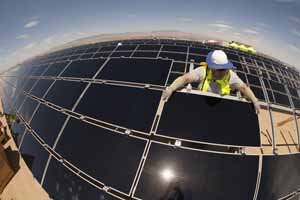 There’s a nowheresville in Los Angeles County: miles and miles of scrub-covered desert stretching from the far reaches of Lancaster to the Golden State (5) Freeway.

Smack in the middle is Antelope Valley Solar Ranch One, an array of photovoltaic solar panels spread over an area larger than West Hollywood that eventually will produce enough power for about 75,000 homes. Its $1.4 billion cost also makes it the county’s most expensive construction project right now.

Despite its remote desert location, the solar ranch has had many of the same problems experienced by other big projects, including permitting delays and opposition from nearby residents. Those are common problems for big solar installations, a glut of which are being built across the Southwest. But such farms could become much rarer in the years ahead as utility companies get close to meeting renewable energy requirements.

But for now, 500 workers are grading land, installing solar panels and laying power lines at the solar ranch. Executives with builder First Solar of Tempe, Ariz., said they are on track to meet their goal of producing power by October despite a construction delay this spring.

“It’s hard to get a sense of how many people we have working – the place is so big,” said First Solar spokesman Alan Bernheimer. “You’ve got a few dozen folks here, a few dozen there. But they’re spread around the different parts of this huge, huge project.”

Indeed, by any measure, the solar ranch is massive. It sits on three square miles of land and will eventually have about two square miles of solar panels – an astounding 3.8 million panels in all.

Designed to produce 230 megawatts of power, Solar Ranch One is by far the largest and most expensive solar development in county history, and one of the largest such projects in the country. It was financed by the project’s owner, Exelon Corp. of Chicago, and by a $646 million loan guarantee from the Department of Energy.

Despite backing from Washington, the project has run into problems with local governments. The company had to stop work for three months during a permit dispute with the county, and local town councils in the rural Antelope Valley are fighting First Solar over the project.

“They are definitely against the installation of this project out there,” said Dexter Gauntlett, an analyst at Boulder, Colo., clean technology consultancy Pike Research. “People don’t want it there.”

The solar ranch sits about 20 miles west of Lancaster on 2,100 acres used as farmland a generation or more ago. Because it’s building on previously tilled land, First Solar had fewer environmental hoops to jump through than it would have had for a virgin site. Sunshine is abundant, cloudy days are rare and the site is just a few miles from existing power lines – ones built to serve wind farms in the nearby mountains.

In short, it’s a near-perfect spot for a big solar array. But such sites are getting harder to find, Bernheimer said. That’s just one reason why big projects like Solar Ranch One could be rare in the years ahead.

“A lot of the sites that could support that size plant have already been claimed,” he said.

There has been a land grab for big solar farms in recent years. That’s because in 2002, state Senate Bill 1078 required electric utilities by 2017 to get 20 percent of their power from renewable sources such as wind or the sun; that mandate was expanded last year to 33 percent by 2020. For a time, utility managers nearly panicked.

“These guys had no idea how they were going to meet these requirements,” said Aaron Chew, an energy analyst at New York investment house Maxim Group LLC. “The big utilities were signing power purchase agreements left and right. One of them had an agreement for a project designed to deliver electricity beamed to them from space.”

“The momentum has switched to smaller distributed projects instead of these massive projects out in the desert,” Gauntlett said. “There are economies of scale you get by going big, but there’s more risk. Communities can just make your life miserable.”

Of course, big plants could be back in vogue if California and other states with renewable energy standards boost their requirements.

“That would be great, we’d love to see it,” Bernheimer said. “But you may see us building more (small-scale) 10 and 20 megawatt plants.”

Indeed, Ben Kallo, an analyst with Robert W. Baird & Co. in San Francisco, said he expects to see more plants in the 30 to 50 megawatt range rather than those producing 200 megawatts or more.

The wide-open space that makes the ranch site a good spot for solar power hasn’t completely insulated it from opposition. Some desert residents say it’s unsightly, though the project saw little community opposition while getting permits.

Disgruntled are members of nearby local town councils, bodies with limited power in unincorporated communities that advise county supervisors. They say construction of the solar ranch is polluting their pristine desert air with dust and diesel emissions, damaging local wells and spoiling their views with chain-link fencing and more than 1,000 acres of solar panels.

The solar array is less than a mile from the California Poppy Reserve, a state park where visitors come to see open and undeveloped country.

“They need to do something to their Stalag 13 installation to make it look more palatable,” said David Jefferies, a divorce attorney who lives about a mile and a half from the fence line.

In 2008 and 2009, when First Solar predecessor NextLight Renewable Power LLC of San Francisco was seeking permits, the company sought the advice of a town council in the unincorporated community of Antelope Acres. After the permits were issued, complaints surfaced from the dormant Oso Town Council and newly formed Fairmont Town Council.

“We weren’t aware of First Solar because no one contacted us,” said Richard Skaggs, president of the Oso Town Council. “They got the OK from Antelope Acres. We complained, but they said, ‘We’ve already got our permits.’”

Bernheimer, the First Solar spokesman, said the company has tried to address local residents’ concerns. Among other things, the company took down the razor wire from atop its perimeter fence and tries to keep dust to a minimum, though county officials said dust remains an issue.

Complaints from a project’s neighbors are nothing new for any developer, but he said this project has been a bit different because of those late-coming issues.

“Typically, these things are worked out in the permitting phase,” he said. “We haven’t seen something like this where, once a project is permitted, so many issues were raised.”

A more urgent issue was raised in April by county officials. A Department of Public Works inspector visiting the site found that electrical connectors on the panels were not safety certified by Underwriters Laboratories, a Northbrook, Ill., company that certifies many consumer electronics and other products.

First Solar had to wait to install the panels and had to furlough more than 200 workers while it worked to prove to the county that the panels are safe. Bernheimer said First Solar’s panels are certified, but under a separate set of standards than the ones used by Underwriters Laboratories.

“We worked for a couple months to satisfy L.A. County that the components were sufficient to ensure worker safety,” he said.

About half of those employees are unionized electrical workers hired to install and connect panels. Most of the rest are local laborers who install posts and tables that hold the panels.

Construction is set to wrap up late next year, but segments of the solar array will go live and start producing power as they’re finished. Power from the array will be sold to Pacific Gas & Electric, and the first electricity should hit the grid in October.

Later this year, First Solar is scheduled to begin construction on two even bigger projects: the Topaz solar farm in San Luis Obispo County and the Desert Sunlight solar farm in Riverside County. Each project is designed to produce 550 megawatts of electricity, more than twice the output of Solar Ranch.

The company also is finishing construction on a 290 megawatt plant east of Yuma, Ariz., and plans to start a 300 megawatt plant in San Bernardino County near the Nevada border next year.

But after those projects are completed, First Solar will be done with big U.S. plants. Looking to keep its pipeline full, the company will focus on foreign markets next.