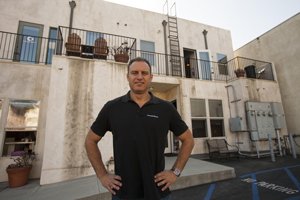 Eric Cohen, owner of Computer Smarts, at his El Segundo parts and repair business where he hopes to someday access solar energy. Photo by Ringo Chiu.

Eric Cohen would love to use solar power at his El Segundo business, but his landlord won’t install solar panels. He can only use the power that Southern California Edison supplies him.

So Cohen is supporting a bill in Sacramento that would allow him to buy power from a solar facility offsite. He figures he could cut his power costs 10 percent while doing his bit to help the environment.

“As an environmentally conscious business owner, this is a no-brainer for me,” Cohen said.

But Southern California Edison, the giant utility subsidiary of Edison International in Rosemead, opposes the bill. The utility argues that other ratepayers would be forced to bear the costs of moving the solar power across Edison’s wires so that a select few customers could get cheaper energy.

“It would pass on the costs avoided by the program participants to other utility ratepayers,” said Gaddi Vasquez, SCE’s senior vice president of public affairs, in a letter last week to a state Assembly committee considering the proposal.

The bill, SB 843 by state Sen. Lois Wolk, D-Davis, essentially would allow customers of SCE, San Diego Gas & Electric and Pacific Gas & Electric to bypass the utilities and purchase renewable power directly from a third-party provider. Customers also can form their own community co-op to jointly own and operate renewable power-generating facilities. The facilities must be within the territory of their power utility and generate only up to 20 megawatts of electricity, enough to power up to 16,000 single-family homes.

The bill requires utilities to accept the electricity generated by the renewable operator and then give a proportional credit to the customers. In effect, the utilities would lose customers, or at least a portion of what the customers would normally buy from the utility.

The aim of the bill is to encourage the creation of small community-based renewable power facilities at the same time it creates a way for customers to buy that electricity. Supporters say that more than 75 percent of the state’s households don’t have access to solar power because they are renters, they can’t afford it or their roofs aren’t suited for solar panels.

Many office and other business tenants are in a similar situation. Cohen, the owner of Computer Smarts, which is a parts and repair business for computers, is one of 10 business tenants in a three-story building in downtown El Segundo. Cohen said he has been approached by solar panel installers who have estimated he could shave about 10 percent from his power costs if he could just convince his landlord to switch to solar power.

“We simply don’t have control over the roof, and as our landlord can’t or won’t make the investment to install solar panels, we’re stuck,” he said.

Some solar development companies support the bill, saying it will give them more opportunities to recruit customers and build small generating facilities closer to population centers. Currently, much of the solar power developments are big plants in the Mojave Desert or other remote locations, which require long transmission lines.

“We’re excited about this bill,” said Scott Beers, director of projects in Los Angeles for Irvine-based Advanced Solar Integration Technologies LLC. “As soon as this bill passes, we’re going to go back to about a half-dozen potential customers who initially rejected solar panels on their roofs and see if they will be interested in purchasing offsite solar power.”

Los Angeles County’s largest solar power developer, SolarReserve in Santa Monica, has not taken a position on the bill. That’s because SolarReserve specializes in major solar development projects that generate more than 100 megawatts of electricity; the bill has a cap of 20 megawatts for a single project.

Other organizations supporting the bill include Homeboy Industries in downtown Los Angeles. The non-profit provides solar panel installation training designed to lead to jobs for people with problem pasts, such as ex-gang members, at the East Los Angeles Skills Center.

“This bill could open up new employment opportunities for our graduates of this program,” said Jose Osuna, director of the solar panel training and certification program for Homeboy. “It’s not just the number of job openings but where we believe the job openings will be. Right now, many of our graduates have to move to the Inland Empire or the Mojave Desert if they want jobs. If this bill passes, we think many more of these jobs will be located in the L.A. basin.”

But the state’s three investor-owned utilities have serious concerns about the bill. PG&E and San Diego Gas & Electric, a unit of San Diego-based Sempra Energy, have been pushing for amendments to the bill. Southern California Edison opposes the bill.

In his letter to the legislative committee, SCE’s Vasquez said the bill allows unregulated companies or organizations to enter into the retail energy market. That would mean unfair competition because the companies wouldn’t be subject to rate regulation and other state requirements for utilities.

Vasquez also said that the bill’s requirement that electricity from the third-party generators be carried across utility wires means that the utilities’ remaining customers will subsidize the transmission costs of customers receiving credits.

PG&E and San Diego Gas & Electric, meanwhile, say the bill should be changed to allow the utilities to get credit toward a state-mandated renewable energy target. By 2020, all three utilities must get 33 percent of their power from renewable sources, such as wind, solar, geothermal or biomass. As currently drafted, SB 843 does not allow the utilities to claim the renewable power generated by third-party providers toward the target.

It could, however, reduce the overall amount of electricity that the utilities themselves must procure, which would make the renewable energy target slightly easier.

The bill passed the Senate in late May and was approved by the Assembly Appropriations Committee last week. It will come up for a final vote on the Assembly floor in the next three weeks, though it’s likely to undergo several amendments before then. If it passes the Assembly, Gov. Jerry Brown must then decide whether to sign it; so far, he has not indicated where he stands on the measure.

Even if people can one day buy solar power from third-party providers, there might still be challenges.

If the bill becomes law, solar power developers will try to sign up enough customers to justify the construction of new solar-generating plants.

But Advanced Solar’s Beers said it will take some time for this model to prove itself.

Most private solar-generating projects are financed by sophisticated investors who obtain purchase agreements from utilities. That way, the investors get a reliable customer and a predictable payback schedule. But under SB 843, the utilities are effectively removed from the picture. Instead, the repayment would come from co-op partners or groups of customers.

“Without the full faith and credit of the utilities backing these ventures, the projects would likely be riskier,” Beers said. “Some investors might be more wary of signing on.”

To counteract this, he said, solar project developers will have to put together large groups of customers.

“The more customers you have to spread out the risk, the better,” he said.