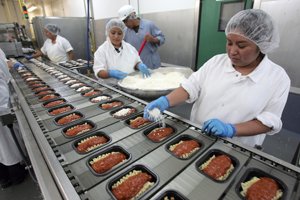 In recent years, frozen-food manufacturer Overhill Farms Inc. has batted away potential buyers that have grown increasingly tantalized by what the Vernon company has been cooking up.

The buzz has accelerated to the point that the company announced last week that it hired Minneapolis investment banking firm Piper Jaffray & Co. to help evaluate incoming acquisition and joint venture offers.

But what has Overhill done that has suitors drooling?

One ingredient: The company began producing a line of Boston Market brand frozen meals about a year ago that has proved successful and has additional growth potential.

The company last Tuesday reported that in its fiscal third quarter it earned about $698,000, or 4 cents a diluted share, compared with a net loss of $332,000, or 2 cents, for the same quarter last year. Its revenues leaped 27 percent to $50.4 million. The jump was largely driven by the Boston Market deal.

Its stock increased about 16 percent to $4.63 for the week ended Aug. 15, making it one of the biggest gainers on the LABJ Stock Index. (See page 48.)

James Rudis, chief executive for Overhill, said in a conference call with shareholders that the results outpace competitors’ performance.

“All this expansion in distribution and revenues has been accomplished at a time when the frozen-meal market has contracted,” he said. “In fact, according to industry reports we use, most major brands have shown double-digit declines in sales.”

“So many companies just make one or two things, but this company might have more than 200 different recipes that they’re doing for people,” he said.

Overhill makes private-label frozen food for grocery stores, for specialty lines such as weight-loss brand Jenny Craig and for fast-food restaurants. It acquired the rights to manufacture and market meals under the Boston Market name last year.

Horowitz said Overhill might be especially attractive to food companies that already have aggressive sales strategies in place but might lack manufacturing capabilities, a recipe that would play off both Overhill’s strengths and weaknesses.

“The weakness of that company has always been that they’re not aggressive sales-wise,” he said. “If you could get that, where you had an aggressive sales force, and pair it with their great manufacturing capabilities, then you’d have a super-duper winner.”

Horowitz said Overhill has long been on food industry investors’ radar, but the company wasn’t ready to sell.

“For many years, there’ve been people trying to buy that company,” he said. “In fact, at one point I had a client, and we made an offer to them. But they’ve been resisting offers for a long time and trying to build up the value of the company.”

Alex Auerbach, an Overhill board member and spokesman, said past bids for the company have undervalued its potential.

“The company has received substantive offers from potential acquirers in the past, which the board, after evaluating them, felt did not recognize the full value of the company to shareholders,” he said.

The company’s recent success with the Boston Market meals, which are made and distributed in partnership with Minneapolis company Bellisio Foods Inc., has only reinforced the idea that Overhill is worth more than buyers have offered.

Rudis said in the conference call that the Boston Market line has yet to reach its potential for profit.

“When we took over the line, Boston Market meals were carried in about 9,400 stores,” he said. “We expect by calendar year end, with the help of our business partner, our products will be in as many as 13,500 stores. We believe there is significant potential for future growth.”

Horowitz, who specializes in mergers and acquisitions in the food industry, said the hiring of Piper Jaffray is a clear indication that the time is right for Overhill to find a buyer at the right price.

“When you hire someone like that, you’re starting to put something together on a company and you’re going to sell it,” he said. “But you don’t want to make it public that you’re for sale, so normally that’s what it means.”

Auerbach acknowledged that hiring an investment banking firm is often seen as a sign that the company wants to find a buyer. He said that isn’t the case this time, and added that the company isn’t looking at a specific offer.

“We really are doing a full review of all the opportunities open to the company,” he said. “It’s really an announcement designed to make sure that the playing field is level in terms of information available. It’s not intended to put a for-sale sign on the company.”