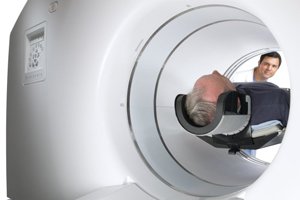 RadNet Inc. has become one of the first – and largest – operators of medical imaging centers to offer a cutting-edge test for brain abnormalities linked to Alzheimer’s disease. The new scan opens a potentially lucrative product line for the L.A. company.

The abnormalities, called Amyloid plaques, are a sticky protein buildup long considered a reliable indicator of Alzheimer’s. The new test involves injecting a radioactive tracer called Amyvid, which Eli Lilly & Co. of Indianapolis developed in conjunction with its experimental treatments for the disease.

Amyvid, which received U.S. regulatory approval in May, makes it easier for radiologists to detect the plaques when reviewing digital images from a positron emission tomography/computed tomography machine, better known as a PET/CT scan.

While there are risks to undergoing a PET scan using a radioactive tracer, the procedure is considered considerably safer than undergoing a brain biopsy that could cause brain damage.

“This was a truly unique opportunity for us,” said Dr. Judith Rose, RadNet’s director of PET/CT and nuclear medicine.

Because there are so few radioactive tracers approved by the Food and Drug Administration, the company’s PET/CT machines, which can cost up to $2.5 million each, often don’t get as much use as they could. The machines are mostly used for diagnosis of certain cancers and a limited number of neurological conditions.

RadNet has begun rolling out the Amyvid scans at six centers in Southern California, one in Northern California and three on the East Coast. Its centers in Encino and Thousand Oaks are scheduled to run their first scans this week, with scans tentatively scheduled for next week at its Beverly Hills office.

There is no cure for Alzheimer’s disease, which afflicts 5.4 million people in the United States and is the nation’s sixth largest cause of death among adults. There also are no drugs on the market that prevent or slow the progression of Alzheimer’s, the most common form of dementia. But RadNet foresees several markets for the test while treatments are being developed.

There also is value for patients who might have similar diseases, such as vascular dementia, to be able to rule out Alzheimer’s because the treatment approaches can vary widely. About 20 percent of Alzheimer’s cases later turn out to have been misdiagnosed, Rose said.

In addition, Amyloid plaques can show up in the brain years before serious cognitive disability becomes apparent, so the test could provide an early warning. Even so, Rose doesn’t see the scan, which is not yet covered by insurance and can cost $2,000 just for the Amyvid tracer, soon becoming a common early screening procedure.

The company worked with Eli Lilly to implement a strict protocol and physician education program on when the test would be appropriate.

Doug Dieter, equity analyst at Imperial Capital LLC in New York, said he wasn’t surprised that RadNet, which owns or operates 237 outpatient centers primarily in six states, decided to be an early adopter of the test.

“Alzheimer’s is a very large market opportunity,” Dieter said. “RadNet has a very innovative business model where they offer a full spectrum of imaging services, whereas other centers tend to specialize. They understand that they need to be the leading provider in the markets where they operate.”

Amgen Inc. last week announced that it was halting a late-stage clinical trial of an experimental drug for reoccurring pancreatic cancer due to disappointing results. A board of medical experts recommended ending the study of ganitumab because it appears unlikely to help patient live longer.

Pancreatic tumors are particularly tough cancers to treat and several experimental drugs from other companies have failed in recent years.

The announcement caused only a 20-cent dip in the Thousand Oaks biotech’s share price, which closed at $81.37 on Aug. 8 but is up 28 percent from the beginning of the year. Analyst Michael Yee at RBC Capital Markets in San Francisco, said in a note that investors didn’t have as high an expectation for ganitumab – which performed only modestly in midstage clinical trials.

“We would say this is yet another reason we believe Amgen needs to get more prudent with (research and development) expenses,” said Yee, who believes the midstage results should have prompted Amgen to kill ganitumab earlier. Nevertheless, he maintains an “outperform” rating on shares.