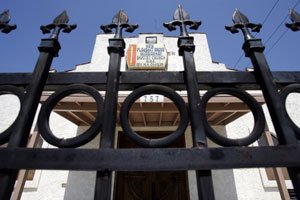 First Evangelical Lutheran Church has occupied the same brick compound on North Maclay Avenue in San Fernando for the past 50 years. It also runs an adjacent elementary school and a high school in Sylmar.

But the church is now at risk of losing it all.

First Evangelical filed for bankruptcy last week after falling behind on its mortgage. With the financial crash cutting into the donations given by the church’s already shrinking membership, First Evangelical has slashed its budget and eliminated almost its entire staff. But options are running out.

First Evangelical is among a growing number of local religious institutions struggling to keep up with loan payments, a phenomenon that is hurting banks’ bottom lines and leading to unprecedented default rates. Since 2008, lenders have foreclosed on 59 churches in Los Angeles County, and the pace is accelerating, according to data from West L.A. real estate firm CBRE Group Inc.

Despite a decline in overall foreclosure filings, six churches were foreclosed on in the first quarter alone, with the county on track to record the largest ever annual total.

Churches nationwide are struggling with the same problem, but experts say defaults are particularly prevalent in Los Angeles, which has a high concentration of small churches, changing demographics that have hurt church membership and an elevated unemployment rate.

The rising defaults are putting pressure on banks and other lenders already contending with souring loans to businesses and homeowners. Broadway Federal Bank, OneUnited Bank and Evangelical Christian Credit Union are among the local institutions that have been hit hard.

Broadway, which has been a major lender to area churches for decades, was placed under a cease-and-desist order by regulators amid heavy loan losses, including $10 million last year. Paul Hudson, who recently stepped down as Broadway’s chief executive but remains chairman, attributed “the bulk of our problems” to church loans.

“Even though in past recessions, churches have weathered it better than other institutions, this one has just been so bad and for so long,” Hudson said. “There has been no period like this during my lifetime.”

The source of the problem was the easy availability of credit prior to the financial crisis. Many churches took advantage of the loans to fix up their facilities, build additions or even purchase gleaming new buildings. According to data from the Census Bureau, annual spending on church construction topped at $9 billion before the financial crisis. It is now less than $4 billion.

After the bubble burst, a sharp decline in property values left many organizations unable to refinance loans when they came due. Most church loans mature between five and seven years, at which point the entire balance must be paid.

The troubles have affected even large congregations, most notably the now-bankrupt 10,000-member Crystal Cathedral in Garden Grove, which had to sell its impressive glass sanctuary in February to the Roman Catholic Diocese of Orange. But most of the loan defaults in Los Angeles are occurring in smaller Protestant evangelical churches, which are struggling to keep up with monthly payments amid a sharp decline in tithing, the main source of income for most churches.

“Giving is down straight across the board,” said Mark Hammond, director of missions for the Los Angeles Southern Baptist Association, which provides support to 175 local churches.

Lower-income areas have been hit particularly hard. A large number of church loan defaults have come from working-class neighborhoods in areas such as South Los Angeles, Koreatown and Long Beach. And those areas have been most affected by the county’s high unemployment rate, which remains above 11 percent even as national unemployment has fallen to 8.7 percent, according to the U.S. Dept. of Labor.

What’s more, many congregations were particularly vulnerable to an economic downturn due to demographic shifts that were putting pressure on the churches even before the recession.

Richard Flory, director of research at the USC Center for Religion and Civic Culture, noted that many historically black areas such as Watts are now predominantly populated by Latinos, the majority of whom are Roman Catholic.

There remains only one majority-black community in South Los Angeles, Flory said. As a result, hundreds of local black churches have watched their congregations shrink in recent decades as members have moved to the high desert, Inland Empire and other regions.

“What happens is you have these African-American churches that are now in predominantly Latino neighborhoods,” Flory said. “There’s a concern right now of how to make these congregations last over time.”

After the financial crisis magnified the problems for churches, many congregations have taken steps to shore up their budgets and remain solvent, including subleasing space to other congregations, Hammond said.

Page, of First Evangelical, said he has worked with a group that will put on a play to raise money for the church.

“We’ve tried to bring more income and we’ve cut our expenses as much as we can,” he said.

The spate of foreclosures has shaken the congregations across Los Angeles.

Mary Raphael, a real estate agent in Azusa who has specialized in church properties for 33 years, said she had never heard of a church foreclosure until about two years ago. But now, many of the listings she handles are distressed religious properties.

“Now, we regularly ask the churches, ‘Is there a notice of default? Are you behind on your payments?’” said Raphael, who runs Raphael Realty with her husband, David. “Before the last couple of years, we would have never even thought of asking something like that.”

Some churches, such as New Pleasant Grove Missionary Baptist Church, are in “preforeclosure.”

Eric Knowles, who heads the religious facilities group for CBRE, said lenders have historically been reluctant to foreclose on churches because of the backlash it would create in the community, so banks would do everything they could to work out the problems with church leaders. Now, though, the “stigma” has faded and foreclosures rarely turn heads.

“Church foreclosures prior to the recession were nonexistent,” Knowles said. “People are callous to it now, so lenders are moving forward with foreclosures. Culturally, this is a huge shift from where we were prior to 2007.”

As of Dec. 31, there were 54 outstanding notices of default on county churches, according to CBRE data. That number, which fluctuates as lenders pull notices and issue new ones, is the highest level ever and has risen steadily from 20 in 2005.

Despite a tentative rebound in the economy, the loan default problem is only deepening for churches, Knowles said, because a wave of prerecession loans are coming due and lenders are unable or unwilling to refinance.

“We’ll probably see more foreclosures of religious facilities this year than we saw last year and perhaps even surpassing the height that we had in 2010,” he said.

Still, there is a glimmer of hope. Los Angeles was the only county in Southern California to see an increase over the last year in the sale price of religious facilities, which rose from $167 per square foot to $171, according to CBRE.

“L.A. is leading us out of the doldrums,” Knowles said.

‘Worst loans you can make’

The problem for banks looking to unload the properties, though, is that there are limited buyers for such a specific property type, said Wade Francis, president of bank consulting firm Unicon Financial Services Inc. in Long Beach. He said many banks shy away from church loans because of the difficulty of collecting on bad loans and of selling foreclosures.

“Church loans are some of the worst loans you can make,” he said.

The few lenders that do specialize in church loans, typically community banks and credit unions, have had to write down considerable losses. Evangelical Christian Credit Union in Brea, one of the nation’s largest church lenders, lost nearly $21 million last year and foreclosed on dozens of religious facilities.

Other institutions, such as Rancho Cucamonga’s Vineyard Bank, have been shut down by regulators due to heavy losses.

Strongtower Financial Inc., a Fresno subsidiary of the non-profit California Baptist Foundation that has assisted many L.A. churches, is voluntarily closing after nearly 20 years. It was started in 1993 to help underwrite and sell bonds for churches that could not obtain bank financing.

Philip Kell, who was appointed to help wind it down, said Strongtower has handled much more than $1 billion in bonds for churches as it has expanded nationwide during the last decade. But as business dried up during the recession, income plunged and the foundation’s board voted to close it.

“Strongtower was just unable to make any money,” Kell said. “It couldn’t do new issues because churches weren’t building much and Strongtower was having difficulty selling the bonds, in any event.”

Broadway, one of the nation’s largest black-owned banks, has been a lender to area churches for more than 60 years. But with about one-quarter of its $360 million loan portfolio devoted to religious organizations, Hudson now admits that his institution was too aggressive with church lending.

“There’s a management aspect to church as well as a spiritual aspect,” he said. “Did you build reserves? Do you have strong fiscal internal controls? Do you react quickly to changing economic circumstances by reducing expenses?”

Broadway, which has more than $16 million set aside to cover expected loan losses, often attempts to work with defaulted borrowers to modify the loan. But the L.A. savings bank has served foreclosure notices on a number of organizations, such as Greater Open Door Church of God in Long Beach, which filed for bankruptcy last month.

Most of the foreclosures occur with little resistance and without making headlines, but not all. OneUnited Bank, which has more than 100 church clients in Los Angeles, is locked in a public battle with one of the oldest and most prominent churches in Boston, Charles Street African Methodist Episcopal Church.

The bank, headquartered in Boston but with most branches and employees in Los Angeles, prompted an outcry in the community when it attempted to foreclose on the historic church after it defaulted on a $1.1 million loan. Church leaders had planned to come to Los Angeles to protest OneUnited branches, but called off the trip after filing for Chapter 11 bankruptcy, which effectively halted the foreclosure process, said Rev. Gregory Groover.

Robert Patrick Cooper, OneUnited’s general counsel, declined to comment on the situation, other than to say that the bank does “not exercise collection remedies, including foreclosure, without good cause.” He called the situation an aberration for the bank, which has had no church defaults in Los Angeles.