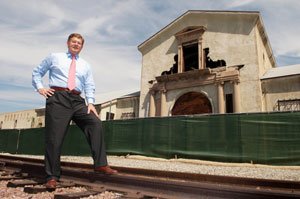 At Myrtle Avenue and Duarte Road in Monrovia, there’s a defunct train station with busted windows and holes in the walls. Just to the south is a recycling center and carwash. And it’s not much better to the north, the site of a vacant lot surrounded by a chain-link fence.

Decrepit, yes. But what Blaine Fetter sees is something entirely different: a neighborhood of 500 residences of young professionals and families, and a gleaming 125,000-square-foot office building filled with bustling workers.

That’s the transformation he expects from his Station Square development as the Metro Gold Line is extended from Pasadena to Azusa, with a stop along the way in Monrovia.

“Being close to transit always creates the most value,” said the developer. “Residents can travel without the use of an automobile and can walk to work. It’s the way it used to work before automobiles, and that’s the direction we are all headed.”

Fetter and his Monrovia development company, Samuelson & Fetter LLC, aren’t the only ones who see the opportunity.

After the years-long recession, there isn’t much private development going on across Los Angeles County, but if there’s an exception, it’s the transit-oriented developments that are cropping up along the extensions of the county’s light-rail network. And the San Gabriel Valley has its share.

Also taking a key role in the development are public officials, who are working with private developers, rezoning land for proposed projects and trying to woo even more investment.

Buttressing the activity: projections that the valley of 1.9 million residents could add a half-million more residents over the next 25 years. With freeways already clogged, there are expectations many will be eager to live near the line, which can whiz them to jobs and places like downtown Los Angeles.

But for all the optimism, building out the transit-oriented developments is not without challences. The dissolution of redevelopment agencies by the state this year has set back some planned projects, while other developers are being cautious, waiting for the trains to arrive before making commitments.

“The opportunity transit-oriented developments have for cities is tremendous,” said Aguilar Perez, a former assistant to the mayor of Pasadena. “If planned, developed and designed well, they can create catalytic opportunities for new businesses.”

The Gold Line extension, also known as the Foothill extension, is planned in three phases that would eventually connect the Foothill cities with the more than 70-mile rail network across the county through a stop at downtown L.A.’s Union Station. Managed by the Gold Line Foothill Extension Construction Authority, the project’s first $735 million phase is fully funded, largely with county sales tax dollars dedicated to transportation.

Construction began in 2010 on the phase, which features six stops between Pasadena and Azusa, and it is expected to be completed by 2015. It mostly follows the Foothill (210) Freeway and stops at the edge of Azusa near Citrus College.

The second phase, also with six stops, continues to Montclair, but the environmental impact report is not yet completed and the project is not fully funded. The third and final phase, which would connect to Ontario Airport, is in early planning stages.

Unlike other areas where light-rail projects have been controversial, such as the San Fernando Valley, there has been broad support in the San Gabriel Valley for the line. It’s seen as a way to spur development without more freeway gridlock.

“It’s a way to start developing in a built-out community, like ours, in a smarter way using thing like multifamily or transit-oriented development,” said Sam Pedroza, a Claremont councilman and a member of the extension authority’s board.

So with little controversy surrounding the projects and support from local governments, developers have been gearing up to take advantage of the opportunities.

In Monrovia, Fetter plans to build his project on 12 acres next to the site of the planned stop, which is near the city’s historic downtown. His project is fully funded and is ready to start construction, but breaking ground has been slowed due to some legal entanglements related to the ending of redevelopment. Even so, city officials are excited by his plan.

“We look at it as this is a big step toward reinvigorating the southern part of the town,” said Monrovia interim City Manager Mark Alvarado. “This is going to take a number of years. But people will see projects developed and others will see there are investments (to make) in the area.”

Fetter is so confident it will be a success that he is talking to officials in other cities along the line about other possible projects. “This is our niche,” he said. “We definitely have an interest in other sites.”

In La Verne, Hutton Cos. of Orange is developing a project about a half-mile away from a planned stop after the success the company has had with an 80-acre development in Montclair near that city’s Metrolink station.

“We purchased that 80-acre piece at the end of 2002, so we’ve been advocates and supporters of the Gold Line extension and light rail for over a decade,” said Scott Felix, executive vice president of Hutton.

Hutton mostly built residences on the parcel and it’s been such a success that the city approved another development of 99 apartments and 30 homes called Arrow Station.

In La Verne, the City Council in June approved a Hutton project of 172 high-end apartments and 15,000 square feet of retail. The company plans to begin construction this summer.

“It’s an infill location and an established market that doesn’t have this type of product. In the event you can get the zoning, you have a winner,” Felix said.

In Azusa, Brookfield Homes Inc. has been working on a 1,250-home master-planned community called Rosedale since 2010. Its development partner are Christopher Development Group of Newport Beach and Starwood Capital Group of Greenwich, Conn.

“There’s such a pent-up demand for new housing,” said Carina Hathaway, Brookfield’s vice president of marketing. “Obviously when you can open up a transportation mode that helps any development nearby.”

Seventeen homes were sold in Rosedale two weeks ago alone for a total of more than 200, Hathaway said. The homes are priced between about $300,000 to $700,000. The company has 75 under construction and plans to complete the subdivision by 2018. The project includes a small shopping center and Brookfield is still looking for tenants.

But not every city has attracted the same level of developer interest. For instance, the Irwindale stop is near Miller Brewing Co. and a large industrial neighborhood, but there has yet to be a development proposal. And east of Azusa, where the extension is still being studied, only a few developers have submitted any plans.

Broker Chris Gomez-Ortigoza of Scottsdale, Ariz., brokerage Land Advisors Organization said that he is identifying property along the eastern section of the extension and trying to interest developers in it. He believes solid transit-oriented developments can provide 100 percent returns.

“It’s hard to pin an exact number, but you have to assume you can double your values at least,” said Gomez-Ortigoza, who is working on closing at least two deals and has met with more than a dozen nearby property owners.

There are other challenges as well.

With the dissolution of redevelopment agencies, building along the Gold Line is proving to be more difficult and possibly smaller in scale than anticipated only a few years ago.

“One of the biggest blows to transit-oriented development has been the elimination of redevelopment agencies,” said consultant Aguilar Perez. “It’s not fatal but it’s a blow. The development community saw it as a carrot.”

The agencies were providing either land or subsidies such as for affordable housing components. If that doesn’t sound like a major loss, consider this. In North Hollywood, around the Metro Red and Orange stations, the Los Angeles Community Redevelopment Agency was able to attract $425 million in private investment by offering up land and $28 million of its money. That has led to the construction of more than 319,000 square feet of commercial development and 186 affordable residences. Now, the area, known as the NoHo Arts District, features theaters, hip restaurants, bar and shops.

In the San Gabriel Valley, Fetter is among those who have suffered the most from the loss of redevelopment. His company and a partner had originally planned his Monrovia Station Square project to span 80 acres with 1 million square feet of office and more than 3,600 units, along with a hotel and shops.

But most of the plots of land necessary were being acquired by the redevelopment agency. Now without it, Fetter only has 12 acres to build on.

“It’s a substantial reduction from what was envisioned before,” he said. “Eventually we may create enough value to acquire the land on our own and continue to develop.”

There are other problems. The Gold Line has already been delayed by more than six years as the light-rail line construction authority sought to secure all of its funding and settle litigation. Those delays have created some wariness among developers, who don’t want to invest too early in projects.

But for those developers who are moving forward, such as Hutton, they believe that the north San Gabriel Valley is ripe for development on its own merits.

“We wouldn’t have bet the farm and made several hundred thousands in capital investment in hopes that Gold Line would come if that was the only anchor,” he said. “But to have something like that … was a factor.”

There is also an X factor that is to the valley’s notable advantage. It can learn from the cities and areas where the county’s rail network has already been constructed.

Mixed-use developments have been built near the Red Line in Hollywood and the Purple Line along Wilshire Boulevard in Los Angeles. But the Green Line from Redondo Beach to Norwalk and the Blue Line from downtown to Long Beach didn’t see the level of development hoped.

Aguilar Perez said the difference depends on how cities position themselves. The areas where development has been low are areas where cities were too slow or unwilling to accommodate higher-density development.

“They can learn about what worked there and what didn’t and how do you scale and phase the development,” she said.

For now, she believes most San Gabriel Valley cities are doing the right thing. For example, officials in La Verne are in discussions to create a new downtown master plan around the future stop, while Duarte is encouraging its largest employer, the City of Hope cancer center, to partner in building a mixed-use project.

In Monrovia, the city is not only actively working with developers, but pursuing basic infrastructure improvements.

“We are redoing streets and widening sidewalks and making things more pedestrian-friendly,” said interim City Manager Alvarado. “We are looking long term as a family-friendly area for living and shopping and the ability to take the train into L.A.”