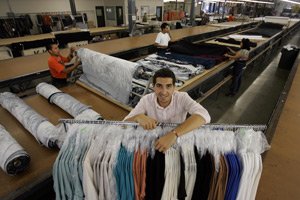 “Made in U.S.A.” labels on clothes stacked on the shelves of stores in China?

Those in the fashion industry say that’s no fantasy. American-made clothes are becoming hot items for a growing Chinese middle class.

And efforts are under way to help L.A.’s apparel companies get ahead of the trend. The California Fashion Association, the Port of Los Angeles and the Department of Commerce recently began working with downtown L.A. apparel maker Velvet Heart to export its locally made trendy clothes to China.

If Velvet Heart succeeds, it could open the door to a huge new market for more of the area’s fashion companies, which employ 120,000 workers.

“There is a cachet about America all over the world and we aren’t taking advantage of it,” said Ilse Metchek, executive director at the California Fashion Association, a downtown L.A. trade group. “The opportunities are enormous.”

But American apparel companies don’t do much exporting. Metchek said less than 10 percent of apparel made domestically is sold in other countries.

What little exporting has been done has been the domain of big fashion houses. The many small and medium-size companies that make up L.A.’s apparel industry find it particularly challenging to export. A Chinese distribution partner must be enlisted, and the exporter has to deal with rules that can change overnight, sometimes stranding shipments for months.

Velvet Heart was selected for the pilot program because Chief Executive Moshe Tsabag already tried and failed to get his clothes into China. About five years ago, he spent hundreds of thousands of dollars on legal fees, translators, merchandise and other expenses to export to China clothes made by an apparel company he previously owned, Hot Kiss. The effort never paid off.

Of course, China is known for manufacturing and finishing apparel that it sends to the United States. But Tsabag is willing to try again to send a reverse stream to China – now that he’s getting help.

“I’m interested in exporting ‘Made in U.S.A.,’ ” Tsabag said. “All of my career, I’ve been importing from China. I want to export over there. China’s economy is growing, there’s money over there and the consumer wants ‘Made in U.S.A.’ ”

If Tsabag succeeds this time, other local apparel companies would like to follow him, including women’s clothing makers A.B.S. by Allen Schwartz; Tadashi Shoji; and Karen Kane, a family business that includes Marketing Director Michael Kane.

Geraldine Knatz, executive director at the Port of Los Angeles, said that would be a likely scenario.

“If we can have a win with an L.A.-based manufacturer, figure out what we have to do to get their garments into stores in China successfully, it will lay that map out,” she said. “And we will be able to share that with other L.A.-based garment manufacturers.”

Metchek said that apparel exports could be increased by 15 percent from the current $116 million to $134 million through the Long Beach and L.A. ports. That estimate may be low, however, because L.A.’s apparel makers have been boosting domestic manufacturing since then.

Any increase would be good for shippers at the L.A. port. About 12,000 containers of apparel were exported last year – less than 1 percent of the port’s total exports. For comparison, about 269,000 containers of used paper and paperboard, mostly used for recycling, were shipped from Los Angeles last year.

The port and the Department of Commerce have recently stepped up efforts to help a range of small businesses send goods abroad, an initiative driven by the Obama administration’s goal of doubling U.S. exports by the end of 2014.

Port officials have reached out to local businesses to teach them about exporting, and in the process realized that they hadn’t been educating the apparel industry sufficiently.

That led to a series of discussions among officials at the port, the Office of Textiles and Apparel at the Department of Commerce and Metchek at the California Fashion Association.

Tsabag of Velvet Heart was then selected to serve as the test case because of his prior experience attempting to export to China.

When he tried to export his clothes to China five years ago, he formed a partnership with the owner of a chain of apparel stores there who wanted to carry his garments. The Chinese retailer spent months waiting for a permit to import the merchandise. Meanwhile $70,000 worth of clothes sat at Tsabag’s office. Tsabag and his retail partner ultimately called off the deal after becoming frustrated with the process.

“I was exporting to Japan, Korea, Australia and the Middle East, and my biggest challenge was China,” Tsabag said. “It was a difficult thing for me. I could import from there, but I couldn’t export there.”

The plan to help Tsabag was finalized during a meeting at an apparel trade show a few weeks ago. The meeting included Francisco Sanchez, undersecretary for international trade at the Commerce Department.

Knatz, who said Mayor Antonio Villaraigosa is also going to help Tsabag during a China trip later this year, thinks the program could show results.

“I felt that if Sanchez got involved and people in Beijing got involved at the highest level, they may be able to make this happen and break ground,” she said.

Even with the backing of local and federal officials, there are challenges in exporting clothes to China.

There are bureaucratic barriers such as nontransparent rules, but one larger issue is the way apparel imported from other countries is distributed in China and whether officials at the Department of Commerce can reach the fragmented distribution network.

Each district in China has its own distribution system, but the Department of Commerce only has offices in five major Chinese cities, where luxury-label clothing is in demand. As a result, it could be difficult for department officials to connect with distributors in second- and third-tier cities, where a growing market for other “Made in U.S.A.” apparel is developing.

“The people who we should be addressing are in the next tier of Chinese cities, where California style is aspirational and affordable, and there are no Department of Commerce offices in those cities,” Metchek said. “So it’s a matter of getting to the people who will find the distributors in those cities and the whole vision of contacting the right people may be beyond their scope.”

Officials at the Department of Commerce said in an e-mail to the Business Journal that the department’s offices in Beijing and Shanghai can help facilitate discussions with distributors even without offices in second-tier cities.

Even so, Tsabag said it’s not going to be easy. But with the guidance being provided through the program, he thinks he has a better chance this time.

“It will be a long war to overcome,” he said. “But now I feel more encouraged. I have half a chance at success.”