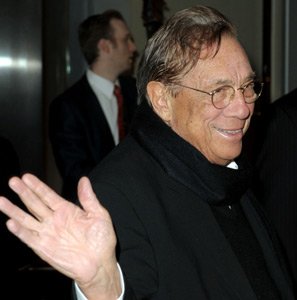 THE MONEY: Told Business Journal portfolio of apartment buildings appreciated since last year. Owns in prime markets such as Santa Monica, Beverly Hills, Brentwood and Westwood. With Blake Griffin lighting up court, his Los Angeles Clippers worth more, too.

BUZZ: Yet another controversial year for Clippers owner; won major victory in March when jury declined to award damages to former General Manager Elgin Baylor, who sued Sterling for age discrimination and harassment. Baylor alleged race discrimination, but dropped allegations before trial. Another legal battle, with former coach Mike Dunleavy over unpaid salary, reached arbitration this year, but no ruling yet. Clippers again finished in the bottom half of the league, winning only 32 games. But with Griffin shaping up as star, Forbes pumped up team’s value to $305 million. Was active in real estate, buying several properties including 66-unit building in Koreatown for $11.5 million. Trophy holdings include Beverly Hills Plaza Hotel and Sterling World Plaza headquarters building. In December, purchased 6-acre site of Vital Zuman organic farm in Malibu out of foreclosure; does not plan to change operation.