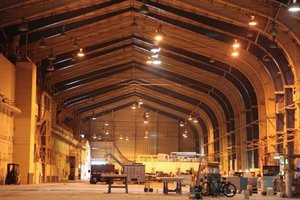 The former Spruce Goose hangar at the Hercules Campus in Playa Vista. Photo by Courtesy Photo

When it’s completed at the end of the year, developer Wayne Ratkovich’s new Playa Vista office complex may seem a lot like Google’s Mountain View digs, famous for their creative amenities such as rock-climbing walls and coinless laundromats.

The similarities are intentional.

According to plans Ratkovich Co. released last week, the complex will be replete with a barbecue pit, boccie ball court, outdoor wireless internet, community bicycles and a dog run – all in a 28-acre campus that includes Howard Hughes’ legendary hangar for the Spruce Goose.

“We want to create the Google effect,” said Ratkovich. “The work station is no longer a place to go from 8 to 5. It’s much more a part of everyday life.”

The complex is within the Playa Vista planned community, which has struggled to attract businesses since opening in 2001. But real estate experts say that the renovation and reconstruction of the former headquarters of Hughes Aircraft could transform an area that today holds the Westside’s highest vacancy rate into a highly desirable neighborhood for creative tenants.

The $50-million project – dubbed “Hercules Campus” to reference the Spruce Goose’s formal name, the “H-4 Hercules” – is in its first phase of construction. It will dramatically transform 11 buildings, dilapidated after nearly three decades of neglect, into 530,000 square feet of office and studio space. Even a rival landlord is welcoming the project.

“To have life breathed into them as creative office and a working studio will be fantastic for the area,” said David Binswanger, executive vice president of Lincoln Property Co., which owns 10 acres of commercial property next to Hercules Campus.

Downtown L.A.’s Ratkovich Co., which has specialized in historical renovations, purchased the property for $34.2 million in November last year. Ratkovich is partnering on the project with Penwood Real Estate Investment Management, a Hartford, Conn. real estate adviser that provided some of the financing. The project is set for occupancy by December.

Unlike some other county submarkets that appear to have hit bottom or are beginning to recover, the Westside office market is still weak. The vacancy rate rose nearly a point in the fourth quarter to 16.4 percent as the market gave back 147,000 square feet of space, according to Grubb & Ellis Co. What’s more, Playa Vista is in the Marina del Rey/Culver City office market, where the vacancy rate was nearly 25 percent.

But there have been some significant recent Westside deals, notably Google’s lease of more than 100,000 square feet of office space in three Venice buildings including the famed Binoculars Building designed by Frank Gehry.

“It’s the next generation of growth on the Westside,” said David Jordan, president of Westside brokerage Second Street Ventures, which does not currently have a leasing role in the project.

Hercules Campus will be organized into three sections: west, east and south.

South Campus features a nearly 3,000-square-foot fire house that will be converted into office space, Ratkovich said. The campus will have a total of more than 112,000 square feet of total office space.

The West Campus houses the most famous of the complex’s buildings, the “Spruce Goose” hangar, which now functions as a 250,000-square-foot movie studio where scenes from “Avatar” were filmed. Ratkovich intends to create at least two smaller studios inside.

In the three-building East Campus, Ratkovich intends to preserve the current office space and covert a former helicopter hangar into office space.

Cosmetic highlights include high ceilings, internal sand-blasted wood and large windows throughout the buildings. Plans are to provide parking at about six spaces per 1,000 square feet of office space.

“It’s going to be a space you can’t get on the Westside,” said Jeff Pion, part of the CB Richard Ellis Group Inc. brokerage team handling the properties.

Pre-leasing is projected for July. The asking price per square foot is $3.25, while asking rent for comparable office space in the area was $2.65 in the fourth quarter, according to Grub & Ellis. Ratkovich and others believe the complex will attract media and advertising companies willing to pay a premium.

“Traditional high-rise office space is not something that appeals to them,” Binswanger said. “So what Wayne plans to do is a perfect fit.”