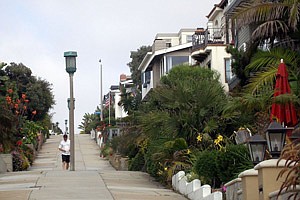 The number of homes sold in Los Angeles County decreased in February in a year-over-year comparison, and median prices also declined to lows not seen since 2009.

The figures, released by HomeData of Hicksville, N.Y., show that last year’s tax credit had propped up the market, according to Leslie Appleton-Young, vice president and chief economist of the California Association of Realtors in Los Angeles. She said there are also fewer foreclosures and short sales on the market, which had brought out bargain hunters.

The number of home sales in the county slipped to 3,371, down about 7 percent from the previous February. The median price edged down to $325,000, or about 1 percent.

“A year ago, the tax credits were in full force in California,” said Appleton-Young. “There were a lot of incentives in the

The government’s crackdown on banks that were “robo-signing” foreclosures has reduced the flow of distressed properties to the market, she said. Robo-signing is a practice among banks of approving foreclosures without verification – which has led to unfounded foreclosures in recent years and prompted the federal government to consider fines for the banks.

But not all areas of the county showed declines. Median prices of homes sold last month in Brentwood jumped 39 percent.

“On the Westside, the market is much more optimistic than last year,” said Stan Smith, who manages the real estate brokerage firm John Aaroe Group in Beverly Hills.

“There is a feeling of optimism,” he said, referring to the Westside residential real estate market. “Rich people are kind of like a barometer – when they buy houses, it means we’re headed in the right direction.”

For the typical buyer, Appleton-Young said mortgage interest rates are likely to increase, and new stringent standards to qualify for loans will continue to present challenges in coming years.