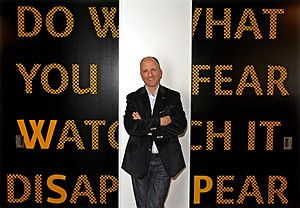 David Angelo, chairman and chief creative officer, in front of a saying, ‘Do what you fear, watch it disappear,’ at the ad agency’s headquarters in El Segundo. Photo by Ringo Chiu.

David Angelo sees himself as a fighter. He named his advertising agency David&Goliath to show his clients he’ll battle giants to get them more market share. He launched the agency in 1999 with Kia Motors as its first client, and the South Korean automaker remains the biggest account today. Other customers include Bacardi, Mattel, Monte Carlo Casino and Universal Studios. The agency’s offices are filled with symbols of David vs. Goliath, from helmets on the reception desk to a sculpture of giant slingshot in the lobby. A group portrait shows the agency’s staff standing behind a giant decapitated Goliath head. Angelo met with the Business Journal at his office in El Segundo to discuss his life and work, including expulsion from high school, a decade as a warehouse worker, his recent win of the Carl’s Jr. advertising account and the days of working in New York when it was an urban nightmare.

Question: If you are David, who is Goliath?

Answer: Goliath is the marketing challenge of our clients. We are a challenger that embraces Goliath-type challenges.

What was the biggest challenge of your career?

Defending the Kia Motors account. It went up for review after five years.

...2004. I had two choices: fold the company, or stand my ground and defend what I believed was rightfully ours. We went up against the biggest ad agencies in the country and prevailed.

You really felt your company was on the line?

Absolutely. And it’s a rarity that an incumbent prevails. The reason an advertiser puts it up for review is they want to go in a new direction.

It was an eight-month process. At the end, the chief marketing officer of Kia pulled me into his office and said, “You won because we believe you are Kia. You are a challenger brand and you genuinely care about Kia more than anyone else.”

I drive a Kia Soul; my wife drives a Borrego. In order to produce great advertising, you have to live the brand. I also believe it’s good karma.

How will you handle the Carl’s Jr. account that you won in October?

Our goal is to take the advertising they’ve done so far and contemporize it.

Will you keep the provocative ads with ketchup dripping on a starlet’s breast?

It’s a brand that has a distinct sense of self. I respect any brand that knows what it stands for. They are unafraid to put it out there and challenge convention. That’s what I live for.

So you’ll continue with the same type of ads?

Without giving away what we’re planning, I’ll say our goal is to take it up a notch.

Do you have a style of advertising?

I don’t think people or agencies should have a style that you force brands into. You lead with the brand and its persona, and let that dictate the style. As for our style, we do a lot of humor around here.

We think humor connects brands with people better than anything else.

My father was a Teamster and an ex-Marine and he instilled this strong work ethic in me. During the first two years of my career as a junior art director at DDB, I got ridiculed by my peers for working too much. But I was on a mission. I really wanted to realize my potential.

How do you do that?

Everyone here knows I don’t like avocado. At a recent company meeting, I ate two slices of avocado in front of the entire agency. If you’re going to tell people to be brave, you need to walk the walk.

I was kicked out of high school in my senior year.

Truancy, tardiness, absences. It was a defining moment for me. I could have gotten a job, gotten married and lived a blue-collar life. Nothing wrong with that. But I wanted something more. I believed in my potential as an artist and didn’t want to be a number. I wanted to be a person that provided value to the world.

What did you do?

I was a warehouseman for 10 years, working the graveyard shift. After a year at that job, I decided to go back to school during the day, got my GED and attended the Academy of Art in San Francisco with a major in advertising.

What did you learn from that experience?

I have a postcard that says, “Do what you fear, watch it disappear.” Every time a challenge presented itself, I look at that card and just did it.

What did you do after art school?

I looked at the card again. Where should I go to work? New York. It was the urban nightmare of 1989. The Central Park Jogger rape case was in the news. I couldn’t think of a place I feared more. So I picked up my bag and moved to Roosevelt Island, that small island between Queens and Manhattan.

What happened in New York?

I got mugged – had to choose to stay or come home. I decided to stick it out. But I got to work for some pretty good clients. My first year I did a campaign for New York State Lottery called “Hey, You Never Know.” It was about imagining possibilities. And I worked on the Clinton campaign.

How did you land that gig?

I was working at DDB, and the campaign was a consulting job on the side. My partner and I created a 60-second anthem spot that ran on election eve. I’d like to believe it had an effect on the outcome.

How would you describe your personality?

I see myself as a lovable maniac. I bring energy to the table. I’m not the type who calls it in. I’m in the trenches with the troops, very hands on.

Where did you go from DDB?

I went to Chiat/Day New York to work on the Reebok and MTV accounts. That didn’t last long. I moved to Los Angeles and worked at Team One on the Lexus and Adidas accounts. Then I become executive creative director at Cliff Freeman & Partners in New York. They did all the Little Caesars and Staples advertising. I worked with Cliff himself and did some of the best work in my career.

After producing about a thousand TV commercials I decided to take some time off. My wife was pregnant and I didn’t want to miss the first year of my firstborn. That was 1998. Then I got a call from Kia Motors asking me to start my own agency.

Why did they call you?

Because of my work on Lexus. Also, a profile about me ran in AdWeek. Everything up to that point was just practice for what I was meant to do.

How was Kia a challenge?

When they came to the United States from Korea, Kia was an unknown brand with serious quality issues. We couldn’t talk about the quality because no one would believe us when the cars were constantly breaking down. Also, there was management change – we’ve had five chief marketing officers in 10 years.

What were some other big moments of your career?

I climbed the Brooklyn Bridge for a photo shoot. I worked with Evel Knievel on a Little Caesars commercial. I played basketball with Kobe Bryant for a pro bono ad about the Starlight Foundation. To think I’m doing all that for a living makes it less of a job and more enjoyable.

Do you feel there’s a conflict between the creative side and the business side of advertising?

No. All creativity and art is made to satisfy a business need. Michelangelo had to satisfy the pope. Whenever you’re trying to sell art or creativity, there has to be metrics attached to it.

Who were your favorite painters?

Salvador Dali; I love his heightened reality. Pablo Picasso; we named our parrot after him.

Any advice to others thinking about starting an ad agency or any type of business for that matter?

It’s very important to have a strong sense of self. That should be the filter for everything you do – the people you hire, the clients you go after, your office space and ultimately your work.

Career Turning Point: Starting his own agency in 1999.

Personal: Lives in Benedict Canyon home with his wife, Iliana, and two daughters: Daviana, 11, and Coco, 8; two dogs, an Australian shepherd and a bichon frise; and a talking parrot, Pablo, named after Picasso.