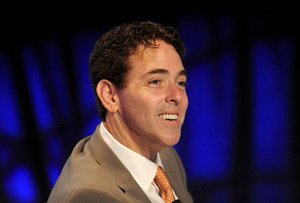 The Monrovia company is the nation’s top issuer of the reloadable cards, but new pressure from one of the largest financial firms in the United States could threaten Green Dot’s position.

New York-based American Express Co. announced last week the launch of a prepaid debit card with much lower fees. It is the first of what could be many large financial companies to enter the nascent but fast-growing market.

“If you’re Green Dot and you wake up and read that American Express is introducing a prepaid debit card, you’re shaking in your boots,” said Thomas McCrohan, an analyst with Philadelphia’s Janney Montgomery Scott LLC who follows Green Dot’s stock. “Green Dot is going to be in a position where they’re defending their turf.”

Green Dot executives were not made available for comment.

American Express made its announcement after a U.S. Senate vote earlier this month failed to delay legislation that will cap the fees that banks earn from retailers on regular debit card transactions. That makes the types of prepaid cards Green Dot offers more attractive since they are exempt from the fee cap.

“Prepaid is going to take a lot of share from debit cards,” McCrohan said.

Prepaid debit cards can be purchased at tens of thousands of retail locations and online. They are used like standard debit cards, but are not linked to bank accounts; instead, users load money on the cards and purchases are deducted from the balance.

The cards have become increasingly popular with the so-called unbanked – those without bank accounts – who represent as many as one out of every five people in the country. Prepaid debit card use has grown 20 percent annually since 2005. But there is still plenty of room for growth. In 2009, the most recent year for which data is available, Americans used the cards for $140 billion in purchases. By comparison, traditional debit card volume topped $1.3 trillion.

Until last week, the market was the exclusive domain of small firms, and industry pioneer Green Dot has held its spot atop the market. The company has earned between $8 million and $13 million in profit every quarter since raising $164 million in a better-than-expected July 2009 IPO. Revenue topped $100 million last quarter for the first time.

But McCrohan said the new competitive pressures could seriously squeeze its margins.

“I think they are very aware of the increased competition,” he said.

Founded in 1999 by Steven Streit, now chairman and chief executive, Green Dot sold its first reloadable cards in 2001. The company now has the largest card distribution network, boasting partnerships with Wal-Mart Stores Inc., CVS Caremark Corp., 7-Eleven Inc. and others. The company recently inked a deal with Rite Aid Corp. to offer a payroll card to its employees.

Green Dot, like Austin, Texas-based NetSpend Holdings Inc. and its other direct competitors, earns money on fees charged to customers and swipe fees from merchants. Green Dot typically charges about $5 to buy its cards, a $6 monthly fee, $5 to load more money on the card and $2.50 to take money out of an ATM.

About one-third of its operating revenue comes from retailer swipe fees, which in the first quarter topped $37 million. Green Dot does not disclose the size of individual swipe fees, but analysts believe they are between 1 percent and 1.25 percent of the purchase price in a retail transaction.

American Express is primarily selling its card online but also is rolling out a pilot program to sell Target-branded prepaid debit cards at Target Corp. stores.

American Express is looking to grow usage of the card by significantly lowering consumer costs. It will not charge fees for purchasing the card online, activation, monthly maintenance or loading via a bank account. There is a $2 fee for ATM withdrawals, but the first one each month is free.

“We created a simple, transparent and easy-to-use everyday payment card to address a real pain point that consumers have with existing prepaid products in the market that are laden with fees,” said Dan Schulman, group president of American Express’ Enterprise Growth Group, in a statement.

American Express also has said it will charge retailers a discount from the 2.5 percent transaction fee levied for use of its charge cards and other cards.

“Anytime somebody big comes in and says they’ll offer your product for free, it’s going to have some impact,” said Gil Luria, an analyst with Wedbush Securities Inc. “But look at the fine print.”

He pointed out that the American Express card actually calls for customers to use Green Dot’s reload system, known as the Green Dot MoneyPak, to put additional funds on the card. That means a card holder would go to a store and buy a $5 MoneyPak – money that goes to Green Dot – which is later refunded to the customer by American Express.

Reload networks, which are connected to cash registers at retail locations nationwide, are expensive and time-consuming to set up. As a result, Green Dot, which launched its network in 2004, has allowed many competitors to use its extensive network.

The idea might seem counterintuitive, but Luria maintained that it is in Green Dot’s interest to keep an open network, because it earns fee revenue from other companies – and competition in the market is inevitable.

“That means Green Dot will get paid every time a customer loads the card,” he said. “Green Dot’s been providing this service to competitors for years now. It’s part of Green Dot’s business model.”

Green Dot also may be looking beyond American Express, which is not accepted at every location and has limited appeal.

The real concern for Green Dot, Luria said, is the prospect of major banks introducing their own prepaid debit cards through the Visa and MasterCard networks. Last year, there were roughly 520 million debit cards in circulation through the two leading card networks. By comparison, Green Dot has 4.3 million active cards; American Express has about 50 million cards in circulation.

Luria expects JPMorgan Chase & Co., Bank of America Corp. and others to enter the market soon as the effects of the pending swipe-fee reform become clearer.

Currently, banks earn an average of 44 cents in fees on each debit card transaction, which generates about $16 billion a year for the industry. The Federal Reserve, over the objections of banks, recommended capping the fees at 12 cents, which was approved by Congress last year. The change will go into effect July 21 after a failed Republican-led effort to block the law.

News that the cap would take effect took a toll on Green Dot’s stock as investors anticipated it would attract major banks into the prepaid market, now that the swipe fees are being reduced. The company’s shares, which had been trading at nearly $50 in late April, fell to a 52-week low of $32.63 on June 8. Shares closed June 16 at $34.19.

Luria said the company is transparent with its fees and the investigation will likely have little long-term impact. But the threat of increased competition is real.

In its first quarter earnings report, Green Dot acknowledged the competition and stated it may need to “increase the incentives that we offer to our retail distributors and decrease the prices of our products and services, which could adversely affect our operating results.”

The company also is fighting back with new features and functionality, including a mobile application that allows customers to check their balances.