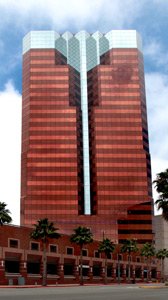 Officials at the Port of Long Beach are close to finalizing negotiations with Legacy Partners Inc. to make a new home at that city’s largest office tower, 1 World Trade Center.

The two parties met behind closed doors June 13 to discuss whether to lease or purchase the 27-story building between the Hilton Long Beach & Executive Meeting Center and Long Beach City Hall, only a few blocks from the port. Sources familiar with the deal but who were not authorized to speak said that negotiations have leaned toward a purchase and that a decision should be reached within the next two weeks.

The port has outgrown its 48-year-old building at 925 Harbor Plaza, requiring it to put trailers in the parking lot. The structure also needs substantial retrofits to bring it up to seismic code. The port occupies about 90,000 square feet, not including the trailers.

One World Trade Center, a 600,000-square-foot Class A office building, has about 156,924 square feet available for lease split between six floors. Asking rents average $2.48 per square foot a month, according to CoStar Group Inc. At that rate, the port would pay rent of nearly $2.7 million annually, or nearly $27 million for a 10-year lease of 90,000 square feet.

The building, which houses the Long Beach Film Office and a Morgan Stanley office, among other tenants, is not listed for sale. It was assessed at $154 million last year. Legacy purchased it for almost $150 million in 2007 and put the building temporarily up for sale in 2009.

Port officials originally intended to build a $295 million headquarters, but the plan was vetoed last year by Long Beach Mayor Bob Foster on concerns about the appearance of a public agency spending such a sum during a recession.

The California Community Foundation is moving and expanding in downtown Los Angeles.

One of the county’s largest charitable foundations, the non-profit signed a 10-year lease for 26,336 square feet at Figueroa Courtyard. The deal, inked last month, is valued at $8 million.

U.S. Bank owns the five-building, low-rise complex at 221 S. Figueroa St. near the corner of Third Street and the Harbor (110) Freeway. Other tenants include the Associated Press and the Los Angeles Department of Water & Power.

The foundation is leaving its headquarters at Union Bank Plaza, 445 S. Figueroa, and is taking an entire floor at its new office, the former executive offices of California National Bank, which U.S. Bank acquired last year.

Chris Runyen, senior managing director of Charles Dunn Co.’s downtown office, represented both tenant and landlord. He said the foundation, which has 65 employees, liked the space because it is 10,000 square feet bigger than existing headquarters, giving it room to grow.

The foundation, which provides grants to social service agencies, is the eighth largest charitable foundation in Los Angeles County, with more than $1 billion in assets, according to a 2010 Business Journal ranking.

Colony, a private investment firm led by billionaire Thomas Barrack, is still negotiating with the Santa Ana real estate services firm. In fact, Grubb’s recent announcement that it would be selling most of real estate investment business Alesco Global Advisors to New York’s Lazard Asset Management may not preclude a sale of some sort to Colony.

“They’re taking the right approach and they are piecemealing it,” said Brandon Dobell, analyst at William Blair & Co. in Chicago. “If I’m Colony, we don’t want the whole thing.”

Dobell said much of Grubb’s value still lies in its national brokerage services unit. Colony has eyes on the unit, as well as Grubb’s real estate investment trust subsidiary.

However, the longer the negotiations continue, the less value there may be in the brokerage. Since the company announced it was for sale, Grubb employees nationwide have been jumping ship, heading to others brokerages like Cushman & Wakefield Inc. and Colliers International. The company’s stock continues to trade below $1 a share.

Grubb spokeswoman Janice McDill said the company remains confident it will turn things around and that a deal is on the horizon.

“Colony is still involved in process. We have a number of interested parties and are continuing to work through the process,” McDill said.