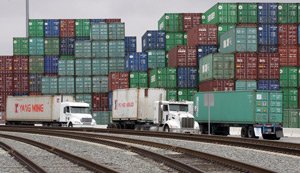 Trucks at the Port of L.A., which wants repayment of some subsidies. Photo by Ringo Chiu.

For six carriers that received subsidies through the Clean Truck Program at the Port of Los Angeles it’s payback time.

The port has hit the companies with bills totaling $1.57 million, claiming trucks bought with the subsidies didn’t make the required number of trips to the port.

Swift Transportation Corp., a large Phoenix carrier that bought 574 subsidized trucks, has been hit with the largest tab: $1.46 million. Other bills to repay some of the subsidies range from $80,000 down to $3,000.

The companies received a subsidy of up to $20,000 per vehicle two years ago as an incentive to buy clean diesel trucks or liquid natural gas trucks well ahead of a Jan. 1, 2012, deadline banning older diesel trucks. But there was a catch: The trucks had to log a minimum number of annual trips into the port for five years.

“If they took $20,000 from us and didn’t meet the trip requirements, then they have to give it back,” said Chris Cannon, the port’s director of environmental management. “We are going to enforce the requirements.”

The carriers were required to make a total of 150 trips – with an entry and exit considered a single trip – in the first fiscal year of the program, which ended June 30. Since the program’s cost was spread out over five years, the penalty was several thousand dollars per truck that did not meet the minimum trip requirements.

The companies were officially notified early this month the money was due and none has yet to pay, according to port officials.

Dave Berry, vice president of Swift, said he is still hoping discussions with the port will resolve the issue without requiring his company to make the payment, but he declined to be specific.

“Swift values its relationship with the Port of Los Angeles and is proud of the role it played in cleaning up the air,” he said.

The other carriers did not return calls for comment.

The subsidies were dispersed through the port’s Early Action Incentive Program, which was approved in 2008, with the money distributed in January 2009.

The port began electronically monitoring truck activity on July 1, 2009. Initially, the port required 300 trips per truck annually, but when 38 carriers that received subsidies didn’t make the minimum trips due to the recession, the port cut the requirement in half, leaving only six carriers in violation.

The port originally notified the carriers last August that electronic monitoring indicated they had failed to meet the requirement, and then spent 10 months double-checking the numbers against hard copy gate receipts, said port spokesman Philip Sanfield.

Earlier this month, the port concluded its review. The port is considering filing legal action if the carriers do not comply with the demands. “We’re ready to talk with our attorneys, (but) hopefully we won’t need to take legal action,” he said.

The port is monitoring trip totals for the 2010-2011 fiscal year, but has not released preliminary totals.

Next door, the Port of Long Beach in 2008 adopted most elements of the Clean Truck Program. However, it offered a different subsidy program.

Only 203 truckers took Long Beach up on its offer. A port spokesperson said all 203 participants exceeded the required 150 trips in the first year of the program.

Sandor Lau, development director of Cascade Sierra Solutions, a Eugene, Ore.-based non-profit financier, said he was not surprised by all the complications with the Los Angeles program, nor the low participation rate in Long Beach.

He noted that his organization has helped fund 600 new clean trucks in Los Angeles and Long Beach. He said clients didn’t want to navigate the 80-plus page grant applications for subsidies, and in the case of the Long Beach lease-to-own program they couldn’t meet the lending standards.

“We lend to borrowers who might not otherwise qualify,” he said. “Many of these truckers are Hispanic or Latino immigrants who come from countries that don’t have the same credit-rating systems.”

Josh Owen, president of Carson-based carrier Ability Trimodal, which services both ports, said there were simply too many strings at either port to enroll in the subsidy programs. Instead, he replaced all 41 of his trucks through low-interest loans offered by Cascade Sierra.

“We secured our own set of grants,” he said. “Hardly anybody took the grants.”