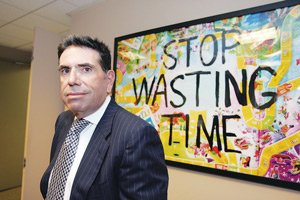 How much name recognition is too much?

Two of the firm’s name partners have close relatives who are prominent elected politicians in Los Angeles County. Partner Matt Knabe is the son of Don Knabe, longtime member of the Board of Supervisors. Managing Partner Harvey Englander is uncle to Mitch Englander, who became a member of the Los Angeles City Council on July 1. In addition, Harvey Englander’s son Joshua works for the Los Angeles County Metropolitan Transit Authority as its Washington, D.C., lobbyist.

Do these names and any potential conflicts of interest help or hinder the growth of EKA, which is ranked second on the Business Journal’s list of public relations firms with revenue of $6.8 million?

Harvey Englander, who founded the firm in 1980, said he doesn’t see the family connections as either an advantage or disadvantage.

“The story of our firm is one of phenomenal growth, and it wasn’t based on relationships with one or two people,” he said. “There is no advocacy going on between me and Mitch or between Matt and Don Knabe.”

Roman Porter, executive director of the California Fair Political Practices Commission in Sacramento, said that elected officials are required to recuse themselves from voting on issues if they have a direct economic interest in the decision. The financial interest is limited to the income or assets of the politician, his or her spouse and any dependent children living at home. The situation at EKA doesn’t meet those criteria.

When an EKA client needs to advocate a position to either Don Knabe or Mitch Englander, a nonfamily member at the firm who has a relationship with those people handles the matter.

Englander said he has heard criticism about the Knabe relationship, but he pointed to a Board of Supervisors vote in November to ban plastic bags in supermarkets as evidence that his firm doesn’t enjoy any special privileges. EKA represented the American Chemistry Council, which opposed the ban, but Knabe and the board approved it.

Englander said he’s aware that it’s important to avoid even the appearance of a conflict. People have asked him to specifically lobby only Don Knabe or former Councilman Grieg Smith. (Mitch Englander was Smith’s chief of staff for eight years before winning Smith’s seat when he was termed out.) EKA refused these requests.

He said he spends time with his nephew at family events, and the Knabes also see each other for holidays, birthdays and vacations. But they don’t talk about business.

At times, keeping up appearances has even been painful.

Elizabeth Lampert, owner of Elizabeth Lampert PR near Oakland, said she has run into comparable situations with political families in California, Texas and Washington, D.C., and knows that some clients are eager to sign up with lobbying firms that have family connections.

“Certain people think it will give them special access and influence,” Lampert said. “If the politician is riding a wave of popularity, it’s good cocktail talk to say that you have a direct line to politician X.”

The only drawback is if the politician gets into a scandal. The negative associations can hurt the client, particularly if any conflict of interest is involved, she said.

Robert Stern, president of the nonprofit Center for Governmental Studies in Los Angeles, said that sharing a name with a politician is an advantage for EKA.

“People see the name and that’s a plus,” Stern said. “It extends the family’s power. (Harvey) Englander was already a power in local politics but this heightens that power, or at least the appearance of it.”

Judy Nadler, a former mayor of Santa Clara who serves as senior fellow of government ethics at Santa Clara University, said the influence of family in politics could be subtle, but voters could judge it to be significant.

That means EKA should pay attention to the public trust in addition to the laws.

“It would be very difficult, if not impossible, when hearing from someone who is associated with your uncle’s firm, to not be affected by it,” she said.

Nadler said if someone took a cynical stance, they could ask whether a nephew, for example, might inherit or join the family firm in the future, therefore giving him a financial interest in seeing the company succeed.

“That’s the ultimate in public cynicism, but I urge people to consider the worst-case scenario because that’s often where it ends up,” she said.

Stern noted that EKA has worked for years with Knabe on the county board without any apparent problems. But one scandal would bring calls for more strict regulation.

“Everybody’s going to be watching them,” Stern said, referring to EKA. “If they do something newsworthy, it’s possible rules will be adopted. And the more you have these family relationships, the more likely people will start talking about enacting rules.”