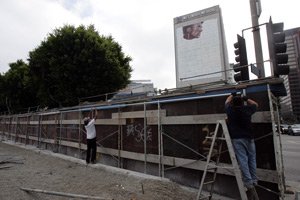 Workers at the proposed spot for a hotel at Wilshire Boulevard and Gayley Avenue in Westwood Village. Photo by Ringo Chiu.

It seems the biggest battles these days in Westwood aren’t on the basketball court but over luxury suites – and not the ones in arenas.

Just months after a controversial plan to build an upscale hotel at UCLA was temporarily sidelined by administrators, a separate proposal to build a four-star hotel near Westwood Village is raising a ruckus of its own.

Prominent developer Kambiz Hekmat wants to build a 250-room four-star hotel on a vacant lot at Wilshire Boulevard and Gayley Avenue, once the site of a Hollywood Video store. The proposal has attracted the support of a homeowners group, the area’s business association and City Councilman Paul Koretz. But opponents, including rival hotel owners, aren’t happy.

“We don’t need another four-star hotel in this market,” said Mark Beccaria, a partner in the 256-room Hotel Angeleno and 36-room Royal Palace Westwood Hotel. “They are definitely going to hurt our business.”

What irks opponents even more: a City Council committee, at Koretz’s urging, agreed last month to review whether the hotel should be given financial incentives. That’s even though the Westside is considered one of the country’s hottest hotel markets, where hotels are changing hands for top prices.

Indivest has not released project costs but hospitality consultants say a typical hotel of this size would run at least $500,000 a room, placing the project’s cost at roughly $125 million or more.

Hekmat disagrees there isn’t room for another upscale hotel in Westwood, which has seen declining room rates during the recession. He said any such problems are temporary.

“I like the challenge of it,” said Hekmat. “I like being able to take a piece of property and create something that would be unique for the neighborhood and bring in life and vitality to Westwood Village, which is my second home.”

Hekmat has been a developer in Westwood for decades. He built the 22-story Center West office tower in 1990 and is the driving force behind a proposed Westwood Business Improvement District to clean up and improve the struggling shopping and entertainment neighborhood.

He also acquired the 19-story Murdock Plaza and is building a six-story hotel, Plaza la Reina, on Lindbrook Drive in Westwood. The rooms are aimed at corporate executives and others on extended stays.

The district has not seen a new large hotel since the W Hotel opened in 2000, but even that was converted from a Doubletree Hotel. The last large hotel built was the 268-room Hotel Palomar, built as a Holiday Inn in 1972.

UCLA most recently proposed to replace its 50-year-old Faculty Center with a $160 million hotel and conference center that would be open to tourists and others outside the university. But administrators withdrew the proposal for a six-month review after fierce opposition from faculty who wanted to save the center and questioned the need for such a complex.

Indeed, Hekmat said he will not move forward with his luxury hotel proposal if UCLA proceeds with its hotel. Instead, he would build more than 100 luxury condos on the site using the same floor plan and exterior design.

“There is only room in the market for one of the two (hotel) projects,” Hekmat said. “It would not to be economically sustainable.”

“If you look at Westwood, there are a lot of empty storefronts and buildings that have run down in the heart of what should be an affluent area,” Koretz said. “You have an area that’s really not competing even though you have an affluent base to draw upon. You can’t just let an area like this, that was once vibrant, die. You’ve got to take the steps to bring it back.”

Hekmat said he intends to move forward with development on the property even if he does not receive the tax break. However, that would likely mean it would take him longer to find financing.

That Hekmat has sought a tax break has surprised some. Alan Reay, president of Irvine-based hotel broker Atlas Hospitality Group, said West Los Angeles is the second hottest hotel market in the country, closely behind Manhattan.

“The more desirable the market, the fewer incentives you need to have. … So unless its (construction costs are) coming in at over $750,000 to $1 million per room, I don’t think you need to give incentives,” Reay said.

West Hollywood’s Mondrian Los Angeles hotel sold in May for $137 million, or $578,000 per room, the top price per room for the county within the last year. In March, Santa Monica’s 162-room Viceroy Hotel on Ocean Avenue sold for $80.1 million, or nearly $500,000 a room, the second most expensive hotel sale based on cost per room.

Despite the relative strength of the market, Hekmat said financing has been difficult for his extended-stay Plaza la Reina project. He had reserved a loan when he started the project three years ago, but used his own money to get it started. When he needed to access the loan two years ago amid the recession, it was withdrawn. He hopes to get a new loan, though, and restart construction in three months.

“While acquisition financing for existing, well-branded, stable hotels is returning – though not with the same high leverage we saw during the peak– financing for new development is virtually non-existent,” he said.

Still, Beccaria said the Hotel Angeleno and Royal Palace Westwood Hotel, both with an average room rate of about $200 a night, have been struggling enough without the threat of new rooms coming on line.

“I can tell you that both the Palomar and Angeleno had terrible financial years in 2009,” Beccaria said. “We do not need another four-star property in our market, not Wilshire-Gayley or a UCLA conference center and hotel.”

Also opposing the project is Westwood Medical Plaza owner Jon Muller, who has complained the tower will block revenue-generating advertisements on the side of his building. He did not return calls for comment.

Several prominent business people and residents also told the Business Journal they oppose the project for reasons ranging from the project’s size to the traffic it will generate, but did not want to be identified at least partly because of an ongoing relationship with the prominent and influential Hekmat.

Indeed, there is substantial official support for the project, including from the Westwood Village Business Association, which functions as the area’s chamber. In an unusual turn, residents in the typically antidevelopment neighborhood have come out in support of the project.

Laura Lake, president of Friends of Westwood advocacy group, which has opposed much large development, said she’s eager to see this project built.

“It would be a wonderful gateway to the village and to Westwood. Given the architect, it will be iconic,” Lake said. “The other thing that’s noteworthy about the project is there was very early community involvement and input, even to the selection of the architect.”

The City Council approved Hekmat’s hotel project in December. Then, last month, the Housing, Community and Economic Development Committee voted to have a city consultant conduct a report to determine whether the project needs financial assistance.

The report, due in 30 to 90 days, will consider an exemption from the transient occupancy tax, or bed tax, which is 14 percent of the rate charged for each room. Other large projects that have received that break include the proposed redevelopment of the Wilshire Grand Hotel in downtown by Korean Air and Thomas Properties Group Inc.

The city has projected the Wilshire Grand’s bed tax holiday could total roughly $54 million over 25 years. The Westwood hotel would be of comparable quality to the downtown hotel, which is larger at 45 stories and 560 rooms.

Koretz said the tax break would be worth it if the hotel succeeds in drawing more visitors to Westwood, which has suffered for years from declining business.