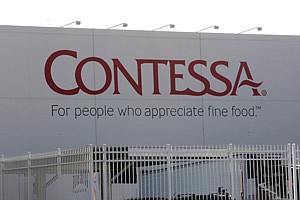 Before the recession, John Blazevich had a dream of turning his Contessa Premium Foods Inc. products into the “green cuisine” of frozen foods, both in their quality and how they were made.

So the private San Pedro company built a $40 million, first-of-its-kind “green” manufacturing plant in Commerce that opened in early 2008 to some fanfare, including from national network news shows. His timing couldn’t have been worse

The recession stopped the company’s projected high-growth trajectory in its tracks, and Contessa filed for Chapter 11 reorganization last month so it could unload debt associated with the facility. Blazevich now faces selling and then leasing back the plant at an April auction. And he’s considering partnerships to save the business he founded in 1984.

“This is a very special plant – if all food manufacturing facilities were built and run like this one, we wouldn’t have all these food recalls, I can tell you that,” said a rueful Blazevich during a tour last week.

Contessa specializes in specialty seafood, gourmet stir-fry vegetables and convenience meals sold in supermarkets, club stores and other venues, under its own name and private labels. It also has an institutional line aimed at restaurants and food service businesses. The company’s marketing trumpets its ban on high-fructose corn syrup, moderate use of salt and emphasis on fresh-frozen ingredients.

The private company, which employs 150 people, has annual revenue of more than $200 million. The company’s bankruptcy filing said Contessa has more than 200 creditors and debts of more than $50 million. Claims made by unsecured creditors so far total $1.4 million.

The Contessa plant was the first time the U.S. Green Building Council awarded LEED certification to a frozen-food manufacturing facility, setting a new industry standard. The LEED rating system considers water and energy-efficiency, the use of recyclable or sustainably produced materials and other elements

The plant’s conference room, for example, is appointed with what looks to be mahogany materials, but which are in fact recycled composite woods. Thin solar energy membranes covers the roof, and heat generated by its refrigerating systems is recycled. Trucks delivering food for processing are attached to the plant with an airlock so refrigerated air doesn’t escape.

The 110,000-square-foot building is about three times the size of Contessa’s older facilities in Vernon. Blazevich said making the plant green at most only added $5 million to its cost, which can be made up over time from lower utility and maintenance expenses. Still, that amounts to about a 15 percent premium on traditional construction.

Blazevich bet that investing in a significantly larger, LEED-certified facility also would pay off in manufacturing efficiencies, as well as increased sales by eco-conscious consumers.

“It’s really the size of the building that ended up being the problem,” he said. “The recession and the cost-cutting by competitors really tripped us up. We thought we’d be able to grow into the plant sooner.”

Blazevich said he immersed himself in green building technologies several years ago after discovering his family’s new home wasn’t as energy-efficient as promised. After retrofitting the home, he realized much of what he had learned could be applied to the new plant, already in planning.

“John’s definitely a disciple,” said Dan Halford, Contessa’s longtime vice president of operations and the new plant’s manager. “And it was really a challenge to do this. It was hard finding contractors and suppliers who understood and could do what we wanted for a manufacturing plant.”

In fact, what Contessa was proposing was so cutting-edge for an industrial facility that the organizations that typically certify green buildings, such as the Green Building Council, were still formalizing standards for such buildings.

“The LEED label exploded during the biggest real estate bubble in history, but it was designed to be used for office and academic trophy buildings,” said New York attorney Stephen Del Percio, who publishes the Green Real Estate Law Journal and participates on teams that evaluate LEED candidates, though not Contessa’s.

Del Percio said it’s unclear how much of a premium Contessa will be able obtain for its facility in a bankruptcy auction.

“Whether it’s LEED certified isn’t going to trump whether it’s a well-situated, well-functioning facility,” he said.

Contessa isn’t the only local prepared-food producer to feel the effect of cost-conscious corporate clients and consumers. Vernon-based frozen-food producer Overhill Farms Inc., a public company that has annual revenue of close to $200 million, recently reported a nearly 16 percent drop in quarterly revenue as it continued to see smaller orders from major customers such as H.J. Heinz Co. and Safeway.