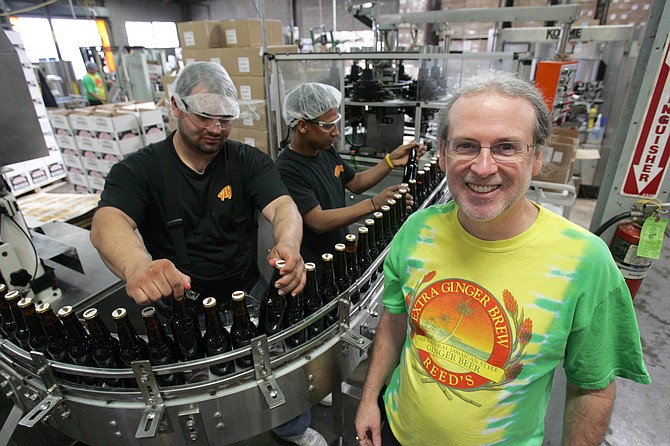 In early 2009, natural soda maker Reed’s Inc. was on the verge of going out of business. The company was down to 33 employees, had barely $100,000 in cash and, with investors fleeing, a share price less than $1.

But today, the company best known for Reed’s Ginger Brew and Virgil’s Root Beer products has more than a little fizz.

Reed’s recently announced that revenue grew 34 percent last year, and estimates further growth of at least 30 percent this year. Shares have jumped around 30 percent in the past month, closing at $2.59 on Feb. 9.

“2011 is taking off like a jackrabbit,” said founder and Chief Executive Chris Reed. “We were down to our last penny.”

The company, based in Los Angeles east of Hawthorne, has found a lucrative source of revenue: making private-label sodas for supermarkets and restaurants. Private-label production is expected to account for more than half the company’s growth this year. The wide margins have enabled it to pump money back into its core business, which remains its brands of all-natural sodas, including lines of apple drinks and herbal colas sold in chains such as Whole Foods and Trader Joe’s.

From Hansen’s Beverage Co. to Dr. Pepper/Seven Up Inc., there’s no shortage of companies that make private-label soda on the side. But Reed, who worked as an engineer before founding Reed’s in 1989, says his L.A. plant has rare capabilities. For example, he claims it to be one of the few that can manufacture swing-top bottles that can be reclosed tightly, champagne-style bottles similar to Martinelli’s apple juice and 5-liter kegs.

The company now makes 18 types of private-label sodas for four clients. Profits from the initiative have enabled the company to have a marketing and advertising budget for the first time, and to increase its sales force by 50 percent to 14.

Joseph Munde, of New York-based Sidoti & Company LLC and the only analyst who covers the company, said there is no doubt the move into private labels is paying off.

“I’m very impressed by the growth that they are exhibiting. They were under the radar for a while,” said Munde, who rates the company a “buy.”

Sales of the Reed’s branded products have jumped double digits as well, which Reed attributed to the larger sales force and to new marketing strategies. Last year, the company leased an additional 13,000 square feet of warehouse space, and is looking for more. It all means that the company could move into profitability this year, for the first time in at least a decade.

Reed, who started the company after becoming fascinated with herbal and ginger-based health cures, took the company public in December 2006 with big plans. He had intended to raise large sums of capital, grow the company quickly and then sell to a major beverage company.

Vitamin Water is the highest-profile example of that strategy. The drink was created by an entrepreneur who sold his company to Coca-Cola Co. for $4 billion in 2007.

“We were designed as an incubator beverage company to bring in a tremendous amount of cash, create an army of sales people, and sync up (distribution) with Anheuser Busch or Miller or Coors to launch around the U.S.,” Reed said.

Reed’s initial public offering raised about $8 million, followed by $9 million in private investments in a round of fundraising in June 2007. Reed was planning to raise an additional $25 million to $30 million with a secondary offering and additional private fundraising, but financing began to dry up toward the end of 2007 – a year when the economy deteriorated and losses hit $5.5 million.

“The rug was just pulled completely out from underneath us,” he said.

In 2008, unable to rely on fundraising amid the financial crisis, he was forced to make cuts. He fired 24 of his 57 employees.

“Basically I dismantled everything we had built going public,” he said. “The low point was firing three-quarters of the sales force, and recognizing that if we don’t have an infusion in the next nine months, we’ll be out of business and filing bankruptcy.”

However, Reed was able to raise $2.2 million in 2009 through a rights offering to stay afloat and at about the same time began moving into private-label work. Losses narrowed to $2.6 million in 2009 and are expected to amount to $250,000 last year when final year results are announced.

Today, Reed’s along with rival Hansen’s are the top-selling soda makers at natural foods stores, according to Chicago-based market research firm Mintel International Group Ltd. It sells about 30 million bottles a year of branded products.

Still, the company is not without its challenges. Darin Ezra, chief executive of Beverly Hills beverage consulting firm Power Brands, said Reed’s will face growth limits unless it expands to more widely appealing products. Based on its current range of products, he predicted the company would cap out at two to three times its size now.

“When is the last time you had ginger beer?” Ezra said. “Their strength and their weakness is that they’ve chosen a very specialized category, and that’s where they dominate.”

In fact, last year, Reed attempted to buy Jones Soda Inc., a struggling natural soda maker with a broader line of drinks, but the deal fell apart when the two sides couldn’t agree on a price. But Reed is not sitting still.

The company plans to add a fifth product line and six extensions to existing product lines, which would be the largest expansion in a decade. At the same time, Reed expects to boost the sales force and the size of the advertising and marketing budget to about $1 million this year and $2 million next year. (While revenue from private-label work is projected to more than double this year to as much as $7 million.)

Reed said the company will ride a a growing appetite for natural sodas, sales of which hit $127 million last year, up nearly 8 percent from 2009, according to Spins, a Schaumburg, Ill.-based company that tracks the industry.