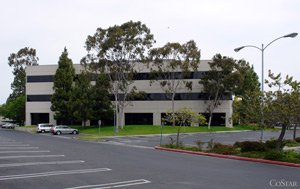 It’s one of three office campuses in Playa Vista, which has been increasingly attracting creative and tech tenants such as Palo Alto’s Facebook Inc., which has an office in the neighborhood.

At roughly $165 per square foot, the sale was among the lowest priced for a Class B space of its size and quality, according to Washington, D.C.-based CoStar Group Inc., which lists comparable Los Angeles County sales within the last year at $180 to $684 per square foot.

Built up in the 1970s and ’80s, and renovated this year, the campus features single two- and three-story buildings joined by a 50-foot glass atrium lobby. The campus was only 18 percent leased, with an average monthly rental rate of $1.75 per square foot.

It was formerly known as the Citicorp Campus because the bank was a past tenant.

Kevin Shannon, vice chairman at CB Richard Ellis Group Inc. who represented the buyer and seller, said that part of the appeal was the lower Westside’s promise.

“It’s a great value-add opportunity in the path of progress,” said Shannon. “They are making a bet on the future of Playa Vista market and the ability to find a tenant for that market. When you bet in L.A., West L.A. is the usually the first market that pays off.”

He added that the buyer plans to take a patient approach to filling the offices.

After two years of discussion, it looks like a high-rise apartment and retail project on Wilshire Boulevard and Vermont Avenue in Koreatown will finally move forward after receiving key funding this month from the city of Los Angeles.

Snyder said the city’s financial backing was the final critical piece to moving forward on the project, known as the Vermont. “Of course, I see this as a win,” he said. “I feel great.”

As part of the agreement, his JH Snyder Co. will provide $1 million for a community center and will partner with low-income housing developers to create 96 affordable housing units in the area.

“We are really going after the new generation of folks that don’t want to live in the suburbs and want to go to L.A. Live at night,” he said.

The company plans to break ground Dec. 8 and complete construction within two years.

In one of the priciest industrial land sales in the central county this year, SoCal Carriers Inc. bought a 110,000-square-foot plot in Commerce for $2.7 million.

The trucking company, which plans to build new headquarters, bought the land from Maechling Family Trust, which had leased the space to a forklift company that moved last year to the City of Industry.

SoCal Carriers was interested in the property at 6403 E. Slauson Ave. in part because of its close proximity to the ports and the Long Beach (710) and Golden State (5) freeways.

SoCal Carriers plans to demolish much of the 36,123-square-foot warehouse and other structures to make way for truck storage. It will relocate from its City of Industry location by the end of the year.

“We had several developers interested in the site. We were successful in finding a buyer who could use the site and they are going to use an office structure and tear down a lot of the other structures and create room for trucks,” said Brian McLoughlin, a senior vice president at the Commerce office of Voit Real Estate Services who represented SoCal Carriers.