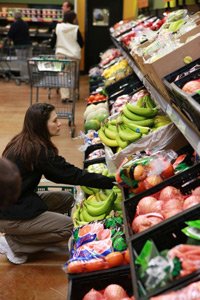 The prospect of another strike by unionized grocery workers is bad news for Vons, Albertsons and Ralphs.

But it’s good, if not great, news for competing nonunion grocery chains that should see more shoppers – and the biggest winner could be Fresh & Easy Neighborhood Markets Inc., the struggling El Segundo-based unit of British retailer Tesco PLC.

Fresh & Easy entered the L.A. and Southwestern U.S. markets with great fanfare four years ago, and has opened 177 stores since then. But the stores have failed to catch on as expected and have yet to turn a profit, losing about $300 million for Tesco in the fiscal year that ended in February.

“A strike of the magnitude that is being talked about could be Christmas come early for Fresh & Easy if it lasted any time,” said Clive Black, who follows Tesco as head of research for Shore Capital Group Ltd. in Liverpool, England.

With that goal in mind, the chain has been revamping stores and planning a marketing campaign to highlight those changes. Improvements include expanding produce and ready-made meal offerings, and making the stores more appealing, such as by installing flower displays. The goal is to attract new customers and bring back people who aren’t regulars.

Brendan Wonnacott, a Fresh & Easy spokesman, rejected the notion that customers don’t like the chain, which is seeing double-digit growth in year-over-year sales.

“All the elements are in place” for the chain to be profitable by the end of next year, Wonnacott said.

He allowed, though, that the company wants and needs to bring more customers into its stores.

“It’s all about introducing Fresh & Easy to more and more customers,” he said.

Members of the United Food and Commercial Workers – a union representing 62,000 grocery workers from Santa Maria to San Diego – voted last week to authorize a strike at Albertsons, Ralphs and Vons if a new deal can’t be reached.

Health care is the big sticking point and the two sides are to meet Monday with a federal mediator. The union claims the grocers want to essentially defund a trust fund that pays for employee health care, while the grocers maintain their plan would keep the fund viable in the face of rising costs.

If there is a strike, the three major chains all stand to be big losers. The last time grocery workers went on strike, in late 2003 and early 2004, many customers shopped elsewhere rather than cross picket lines. That was a boon for Trader Joe’s, Costco and other nonunion grocers and retailers.

Fresh &Easy could really use the help.

In launching the chain, Tesco aimed to give U.S. consumers a healthier and more convenient kind of grocery store. Stores are about 10,000 square feet – much smaller than typical groceries – and have fewer frills. Produce is displayed in plastic crates and the stores use only self-checkout counters.

The stores, which offer Fresh & Easy branded items as well as major brands, focus more on produce and prepared food and seek to capitalize on Americans’ health concerns by promising products free of trans fats, artificial colors and flavors.

However, the chain has failed to catch on as Tesco expected, slowing down the rollout. The company had projected Fresh & Easy to experience its biggest losses in 2008, but losses have widened in the two years since.

The chain opened 60 stores its first year and planned to have more than 200 locations by the end of 2008. Now, the 200th location won’t open until later this year at the earliest. Last year, it closed13 locations, mostly in Nevada and Arizona, saying they would be reopened when the economy improves.

While the recession has played a role in the chain’s struggle, Fresh & Easy is making changes to better fit the market. It is in the middle of a push to revamp and expand offerings at existing locations, including the 33 in Los Angeles County, and is developing stores of about 3,000 square feet for urban areas.

The chain is shrinking health and beauty offerings and filling that shelf space partly with a new section of gluten-free items. It also adding bakeries to about 100 locations and expanding its Mexican food line. Produce sections will expand, as will prepared meals.

And after learning that customers found the stores “clinical” in feel, Fresh & Easy is installing wood laminate over the concrete flooring in some stores, as well as moving flowers toward the front entrance. It’s even adding doors to freezer cases to make stores less chilly.

For all its problems, as a young and growing chain still trying to build a customer base, Fresh & Easy stands to gain more from a strike than its more established neighbors.

Shore Capital analyst Black said anything that pushes customers out of their established shopping habits and into Fresh & Easy would be a big boost for the chain.

“Evidence suggests that those who visit Fresh & Easy stores tend to return,” he said. “Fresh & Easy’s big challenge is, perhaps, getting folks through the door in the first place.”

She said same-store sales at the Commerce-based chain were up about 20 percent in the two quarters affected by the strike. That compares with increases of about 7 percent in the prior months. “For Smart & Final, it was a case where they were a little below the radar screen for most consumers. During the strike, consumers went to Smart & Final and saw it with fresh eyes,” she said.

However, the question may not be whether Fresh & Easy will benefit, but rather whether it will benefit for the long term.

Steve Stallman, president of Stallman Marketing, a food and retail industry consultancy in Northridge, said he occasionally shops at Fresh & Easy, but that overall the store isn’t a good fit for him. For one thing, he’s confused by the store’s mix of high- and low-quality items, such as tasty-looking prepared meals but questionable-looking frozen vegetables.

He expects to shop more at Fresh & Easy if there’s a strike to avoid crossing picket lines, but he likely won’t become a more loyal customer.

Stallman said he has noticed the improvement Fresh & Easy has made, but he doesn’t think the chain has gone far enough to become a hit with shoppers.

“If they don’t have the right offerings, in the long run, it’s not going to do them any good,” he said. “No one really cares about one-time visits. Even if they go there (only) for the remainder of a strike, that’s not what Fresh & Easy needs.”