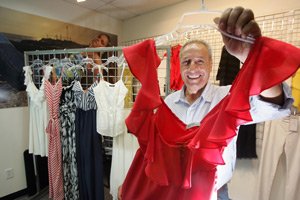 The tags on nearly all the fashionable tops, pants and dresses manufactured by Velvet Heart, a downtown L.A. company that makes apparel for retail chains and boutiques, now read: Made in USA.

It’s a big change at Velvet Heart, which had been manufacturing mostly in Asia. Only 30 percent of its clothing was made in Los Angeles until the beginning of this year. That figure is now up to 95 percent.

Moshe Tsabag, founder and chief executive, cited two driving forces: the increasing costs of labor and raw material in China, and the need for quicker turnaround here at home to accommodate his fast-fashion retailers.

“There’s a need for faster delivery, and this is where Asia is not able to accomplish as much,” said Tsabag, who noted that it may take three or four months to get a new item from China. “Here, I can get the fabric in a couple of weeks, (have the apparel made) in three weeks and get it in the stores in five weeks.”

Tsabag isn’t the only one boosting manufacturing in Los Angeles.

“We are getting calls every day from brands saying, ‘We want to shift our production back to the United States,’ ” said David Perry, founder of apparel design, sourcing and production firm DSP Group in downtown. “Financially, it works; logistically, it works. It’s a trend now.”

For more than a decade, the apparel manufacturing industry in Los Angeles County had lost jobs to global competition. Companies started moving garment production to factories in Mexico after the North American Free Trade Agreement went into effect in 1994. Many jumped to China when quotas on apparel goods from there were phased out from 2002 to 2005. Before then, companies couldn’t take advantage of labor costs, which were so low that the savings more than compensated for transport costs.

As a result, the number of workers in the county’s apparel manufacturing industry plunged 54 percent, from 104,300 in 1996 to 48,300 last year, according to the state’s Employment Development Department. About 98 percent of all apparel sold in the United States is imported now, with 40 percent coming from China, according to the American Apparel & Footwear Association.

But the landscape is changing. Now, employment in L.A.’s apparel manufacturing sector is increasing for the first time in more than a decade.

Employment in the industry grew 1 percent from 47,900 workers in 2009 to 48,300 last year, the first year-over-year increase for the county’s apparel manufacturing industry since the mid-1990s, according to the state’s Employment Development Department.

And the pace appears to be quickening. Apparel manufacturers employed 52,900 people this June, up 6.2 percent from last June. By comparison, the country’s overall manufacturing sector grew less than 1 percent over that same span.

It’s not as cheap these days to produce garments in China, which is facing increasing labor and raw material costs. Perry of DSP Group said labor costs alone rose 20 percent last year and are on track to go up another 20 percent this year. A burgeoning middle class in China is driving factories there to make more clothing for their own people. And the weaker dollar hasn’t helped local manufacturers because foreign goods effectively have become more expensive.

Perry said one of his local clients two years ago paid $35 for each motorcycle jacket from China, not including shipping costs. But now the cost is $48 – the same cost as one made in Los Angeles.

At the same time, there’s been a change domestically. The U.S. fast-fashion industry, which is dominated by local players such as Forever 21 Inc., Love Culture and Papaya, have conditioned shoppers to see fashionable apparel on store shelves much sooner than in the past. Twenty-somethings who spot new fashions in a magazine now expect to see those tops, dresses and pants on store shelves in a few weeks, not months. That means apparel makers – if they want to be successful – are forced to make trendy clothing locally because they can’t afford to wait for overseas production and long shipping times.

“A retailer tries to keep the stock moving in the store so the buyers will continue to return every couple of weeks,” said Nancy Sidhu, chief economist at the Los Angeles Economic Development Corp. “It requires continuous reorders and new merchandise and that’s more difficult to handle at a distance.”

“Fast-fashion is now a fact of life,” said Ilse Metchek, executive director at the California Fashion Association, a non-profit organization in downtown that represents the state’s apparel and textile industries. She estimated that about 65 percent to 70 percent of the clothes sold at Forever 21 and Love Culture stores are made in Los Angeles.

“Waiting three or four months for a garment was regular, and you went to Mexico if you wanted it in two months. Now you want it in three weeks,” Metchek said.

Tsabag of Velvet Heart also realized that his production costs would not be too far out of whack if he started manufacturing locally. For example, a dress made in China cost him $8.50 to manufacture and import. To make that same dress in Los Angeles, it costs him $10, a 17 percent increase.

But Tsabag believes retailers and shoppers are willing to pay extra for Made in USA clothing. He’s now using the label as a selling point.

“There is more appeal now for clothes to be made in U.S.A. than in any foreign countries,” said Tsabag, an Israeli immigrant who launched Velvet Heart after successfully growing and selling two other apparel brands, Yes Inc. and Hot Kiss.

Velvet Heart, which employs 17 and is on track to generate revenue of $6 million this year, makes fashion-forward clothes for 20-somethings that retail for $48 to $98 at Nordstrom, Anthropologie and more than 1,500 boutiques nationwide such as Fred Segal and Kitson.

Meanwhile, Karen Kane Inc. is manufacturing the majority of its collections for the fall and holiday seasons in Los Angeles this year after price increases and quality issues pushed the Vernon apparel company to significantly cut back on its use of overseas factories in the last year. About 80 percent of Karen Kane’s line is now made locally, compared with 50 percent in the past.

Michael Kane, director of marketing at Karen Kane and son of founders Lonnie and Karen Kane, said the company used to inspect 10 percent of its goods before shipping to retailers. That increased to nearly 100 percent after quality of the company’s Chinese-made garments started to slip.

“It became so difficult for us to work overseas in terms of the quality and turnaround times that it made more sense to do more things here,” Michael Kane said. “The quicker turnaround times and more faith in what you will be receiving are costs that aren’t in set dollars, but they are very costly in the end.”

Karen Kane, which was founded in 1979, sells its tops, dresses and bottoms for women at major department stores such as Bloomingdale’s, Nordstrom and Macy’s for an average retail price of $85.

The company, which employs 150, produces its samples, or prototypes, in-house at its 130,000-square-foot factory and then contracts with local factories for mass production – sewing, finishing and other manufacturing services.

One local apparel veteran is capitalizing on the increasing attractiveness of domestic production.

Carlo Gholami has been making men’s clothes at his company, Couture the Clothing Co., since 1993. His apparel is made at a 10,000-square-foot factory on Pico Boulevard a few blocks from Staples Center, and sold at his Melrose Avenue retail store and boutiques nationwide.

The recession took a toll on Gholami’s business, so more than a year ago he started Couture Production Service, which provides product development, fabric cutting and sewing, and merchandising to other apparel companies.

Gholami said he’s seen an 8 percent to 10 percent increase in business since the beginning of the year, especially from smaller apparel brands that first went overseas to make their garments but ran into problems, including Chinese demands for large orders.

“They have to face huge minimums and long delivery dates, which a small manufacturer cannot survive,” Gholami said. “Also there’s the quality of the sewing, which you don’t have any control over when it’s thousands of miles away.”

There are challenges to local production, however. L.A. apparel contractors, which operate the smaller knitting, cutting and sewing factories that produce garments, are finding it increasingly difficult to hire workers who have both needle-and-thread skills and authentic working papers. Contractors also need better access to financing to purchase new, more efficient equipment.

“The whole thing is tied around immigration and industrial training,” said the California Fashion Association’s Metchek. “And to compete, you need high-speed, versatile machines that can make chiffon one day and cotton another. But how you get that financed is a huge problem.”

“One thing that will nip this in the bud is if the city doesn’t get behind this,” Perry said. “Red tape, financing, taxes, affordable rents, permits, whatever it is the city has to say we will help you do this.”

And in an ironic change, now that China’s growing middle class has become a major consumer of luxury goods, shoppers there want to buy clothes made in Europe or even the United States.

“China’s middle class is rapidly expanding, and when the middle class gets money, it doesn’t buy cheap,” Perry said. “That’s going to help our business steam roll in the next two years.”