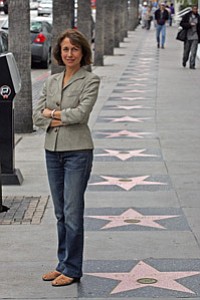 Amy Lemisch of the California Film Commission outside her Hollywood office. Photo by Ringo Chiu.

The $100 million in tax credits California has available each year to help convince movie and TV productions to shoot in the state have always seemed paltry compared with the lavish giveaways available in many rival states.

But there is growing political pressure in several of those other states to downsize or even end their programs because of tight budgets – a development that could work in California’s favor.

Arizona allowed its film incentives to expire at the end of last year, while New Jersey suspended its tax credits for the current fiscal year. In addition, Michigan is considering capping its program for the first time, New Mexico has already trimmed its incentives and Pennsylvania is under pressure to do the same.

“It is probably less generous than almost every other state that’s offering a program. But I think because of that, our program will be easier to sustain,” said Amy Lemisch, director of the California Film Commission, which doles out the credits.

Since California’s Film and Television Tax Credit Program was launched in 2009, 116 projects have benefited from it. To date, $300 million in credits have been distributed for films such as “Water for Elephants,” which opened over the weekend, and the HBO miniseries “Cinema Verite,” which premiered Saturday.

Hundreds of more productions are already expected to clamor for credits when another $100 million becomes available June 1. In the past, the commission has had to turn down about 60 percent of qualified applicants because credits run out.

“There’s a lot of anxiety among the producers and those in the industry who will be applying,” Lemisch said.

The commission claims the program is directly responsible for generating $2.2 billion in spending in the state since July 2009. Of that total, $728 million has been in wages for below-the-line workers, who are lower-profile production employees aside from actors, writers and directors such as grips, and lighting and camera crews.

“I think it’s a pretty big spending impact for our $300 million investment,” Lemisch said from her office in a high-rise on Hollywood Boulevard in Hollywood.

According to FilmLA, which coordinates film permits for the city and unincorporated parts of Los Angeles County, on-location feature film production was up by 8.1 percent in 2010 from a year earlier. FilmLA President Paul Audley attributes the entire increase to the state tax credit.

Otherwise, Audley said it would have been the worst year on record for county productions shot outside a studio. He credits the incentive with 26 percent of L.A.-area film production last year and with 15 percent so far this year.

Some argue the incentive is a giveaway, he said, but “the reality is, if you don’t compete, then the work doesn’t happen here at all.”

So that people don’t have to camp out in the days leading up to June 1, when the credits for the upcoming budget year become available, applications can be turned in between 9 a.m. and 3 p.m. Productions that qualify are given code numbers and placed in a queue. The incentives are then awarded through a random selection process.

“We’ve taken away the necessity of anyone lining up,” said Lemisch. “They come in, they get date-stamped, they get a receipt and they go away. Having a hundred people lined up for days just seemed ridiculous.”

Because of the stakes involved, the commission moves quickly once the applications are in and alerts producers whether they’ve made the cut or are on the waiting list.

“We notify each applicant on June 2 what their standing is,” Lemisch said. “That takes away a big piece of this anxiety.”

The cash-strapped state Legislature will vote whether to extend the incentives after 2012. Assemblyman Felipe Fuentes, D-Sylmar, has introduced a bill that would extend the incentives through 2019. Even though the state is facing a budget deficit of $15 billion for the next fiscal year, Fuentes is cautiously optimistic.

“A lot of colleagues don’t like tax incentives,” he said. “Given where we are and with other states competing, I feel very confident about being able to make the case that we can’t lose this $2.2 billion.”

“California is in a unique situation in that it is striving to preserve an industry that it’s had for a long time,” said Mark Robyn, an economist for Tax Foundation, a Washington, D.C.-based tax policy research organization. “Most other states are trying to win over an industry that they haven’t had.”

He is among those who believe the benefits to California and other states may be overstated.

“You have to assume that every production that received a credit would have relocated elsewhere in the absence of the credit, which does not necessarily follow even if someone tells you that’s the case,” he said.

Robyn testified last month in Sacramento before an Assembly committee reviewing California’s tax credit and called the competition for filming between states “an arms race of tax incentives.”

California’s incentives are still not as generous as those offered in most of the more than 40 other states and foreign countries also aggressively courting film and TV production.

The state offers a 25 percent tax credit to an independent film with a budget of $10 million or less, or a TV series that moves to the state after previously being shot elsewhere.

A studio project, which typically has a far bigger budget, is eligible for a 20 percent tax credit. Films with a production budget of up to $75 million are eligible, as are television movies and miniseries with at least a $500,000 production budget, and a new cable series with a minimum budget of $1 million.

The credit comes in the form of a tax certificate after production is complete. Only credits issued to an independent film can be sold or transferred to another party if the production needs to monetize the tax credit during shooting. The rules on secondary markets for tax credits vary from state to state with most having less restrictive policies than California.

A production will only get the tax break on costs for below-the-line labor, which excludes actors, directors and writers. Tax breaks can also be applied to anything that is rented or bought in the state to get the movie made such as sets, wardrobe, camera equipment and postproduction work.

So, for example, a project that spends $10 million on the items that qualify can get $2 million off its state tax bill, assuming it is in the 20 percent bracket. If the producer gets cash by selling the tax credits to a company that can use them, a practice allowed in many states, he typically must accept a steep discount, say 40 percent or so. In this example, that means he would get $1.2 million in cash.

California’s incentives are still dwarfed by New York state, which can award credits totaling as much as $420 million a year. Last year, its Legislature extended the program through 2014. Qualified projects can receive a 30 percent tax credit plus an additional 5 percent for an incentive from the city of New York if filming takes place there.

Other states popular with producers because of tax breaks, location, infrastructure and talent pools include Georgia, Louisiana and Illinois, which all offer 30 percent in tax credits.

Lemisch, of the California Film Commission, said it had been frustrating to try to compete before the state adopted its own credits.

“I’m supposed to be increasing production and without a tool like this, there’s not a lot I can do,” she said. “It is less generous than almost every other state that’s offering a program, but I feel like at least we have something. Could I do more if we had more funding? Of course.”

The state incentive was crucial to producer Larry Thompson when it came time to make his TV movie “Amish Grace,” which aired last year on Lifetime and had a budget of $2.5 million.

“I only had so much money to make the movie and I was able to make it for that number, shoot it here and save on traveling cost,” Thompson said. “The new tax incentive was available and I thought, ‘My gosh, it’s been so long time since we’ve shot here at home, wouldn’t that be great?’ I just got used to looking to other countries and other states.”

But with other states throttling back on their incentives or thinking of doing so, producers like Thompson may have another reason to look again at California.