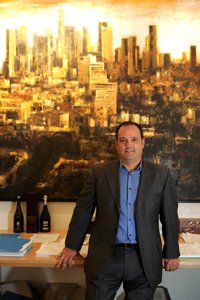 Richard Meruelo’s fight to retain control of his bankrupt real estate company has heated up amid an effort by creditors, including East West Bancorp, to seize control of the firm.

The court proceedings have become so rancorous that last week a U.S. Bankruptcy Court judge ruled that a Sept. 9 press release issued by Meruelo Maddux Properties Inc. contained “substantial inaccuracies” and should be retracted. The release called a reorganization plan submitted by the Pasadena bank “predatory” and a “hostile takeover.”

“The press release escalates things up a notch,” said Dan Schechter, a professor at Loyola Law School. “This is pretty uncommon.”

The release is just the latest in what has become a bitter dispute over the future of the largest land owner in downtown Los Angeles. Meruelo Maddux filed for Chapter 11 bankruptcy protection in March 2009 when it was unable to make payments on $266 million in debt.

At the time, the company had amassed a portfolio of 4 million square feet, about 3.4 million of which was in the downtown area, mostly in eastern industrial neighborhoods. The company planned to develop much of its property into residential and mixed-use projects but was hit hard by the real estate bust.

Meruelo Maddux’s efforts to restructure have been complicated by two rival reorganization plans – one from note holders East West and Legendary Investors Group No. 1 LLC, and another from shareholders Charlestown Capital Advisors LLC and Hartland Asset Management Corp.

Under those plans, Chief Executive Meruelo and President John Maddux – the company’s two largest individual shareholders –would be removed from management and lose their controlling interests. Meruelo has a 45.3 percent stake in the company and Maddux has a 6.58 percent stake.

Meruelo did not appear in court Sept. 15, and did not respond to repeated telephone calls for comment. He told the Business Journal in a July 2009 profile that his company was a victim of the credit markets and that he wouldn’t back down from his effort to retain control of his firm.

Maddux, who attended the court proceeding, declined to comment.

In addition to East West, other large creditors of the firm include Bank of America and Cathay Bank, both of which declined to comment.

East West is a creditor because it assumed two real estate loans made by United Commercial Bank to the firm. Meruelo Maddux owes the bank about $32.8 million for the loans, said bank spokeswoman Emily Wang. East West purchased the assets of United Commercial after it failed last year.

East West has taken issue with the press release largely because it included language such as “half baked,” “predatory” and “hostile takeover” to describe the bank’s plan. The release also stated that East West appeared to be financing the plan using money it received through the government’s Troubled Asset Relief Program.

Wang disputed the release, saying that East West’s plan solely reflects its effort to maximize recovery on the two loans, adding that the bank’s $307 million TARP money has nothing to do with its plan.

“I don’t see any connections,” she said.

Legendary, an investment entity based in Pasadena, became involved in the matter last year when it acquired other loans from East West that the bank had made to Meruelo Maddux, said Doug Krause, East West’s in-house counsel, in an e-mail interview. Legendary did not return phone calls seeking comment.

As part of its joint reorganization plan with East West, Legendary would give the newly formed company a $5 million cash infusion and $65 million in debt would be converted to equity in the form of stock. Krause said that the bank would own less than one-third of the stock of the new company and would sell the shares “to obtain repayment of our loans.”

“We are just collecting a loan and are not seeking to own other companies or speculate in real estate,” he said.

“They are essentially seeking debt repayment in the form of stock ownership hoping for an upside at the end of the day. Otherwise, what will they get?” he said.

The third plan, by Charlestown and Hartland, includes a cash infusion of about $30 million. Hartland is a White Plains, N.Y.-based asset manager that invests in real estate and renewable energy. Charlestown, based in New York, is a private merchant banking company that specializes in financial advisory services to emerging companies. Hartland founder Lee Smith declined comment.

The next step in the bankruptcy will come Oct. 1, when the three proposed reorganization plans are expected to be sent to creditors. A vote on the plans is expected to take place in January.

However, the Meruelo press release could disrupt that schedule. Last week, Judge Kathleen Thompson told Meruelo Maddux that the press release should not have been issued and will have to be personally retracted by Meruelo, who was quoted in the release.

She agreed with attorneys for the creditors who argued that the press release promoted the alleged merits of Meruelo Maddux’s plan and the potential negatives of East West’s plan, thereby soliciting the votes of creditors and violating bankruptcy law.

It’s possible that as a penalty the judge could prevent Meruelo Maddux’s own reorganization plan from being presented to creditors, though Schechter said that would be unusual.

“I have rarely seen something like this, but it has happened,” he said.

In any case, it’s unclear what sort of portfolio Meruelo Maddux will be left with once the company emerges from bankruptcy.

Marquee holdings include Union Lofts, a Hill Street office building converted into apartments, and a 1.4 million-square-foot building where clothing company American Apparel Inc. has its headquarters. But this year the company was forced to sell off its biggest residential development, a 214-unit high-rise at 705 W. Ninth St.

What’s more, the downtown real estate market remains slow, with most development projects mothballed or shelved, meaning that Meruelo Maddux would have to be content to draw income from its industrial buildings until the market rebounds.

Mark Tarczynski, a broker with CB Richard Ellis Group Inc., said he sees signs that the credit crunch is easing, though he’s unsure how much demand there is for new housing or retail.

“Lately, despite all the gloom and doom economic news, cash is beginning to be freed up,” he said.

Shares of the company closed at 17 cents Sept. 16 on the Pink Sheets.