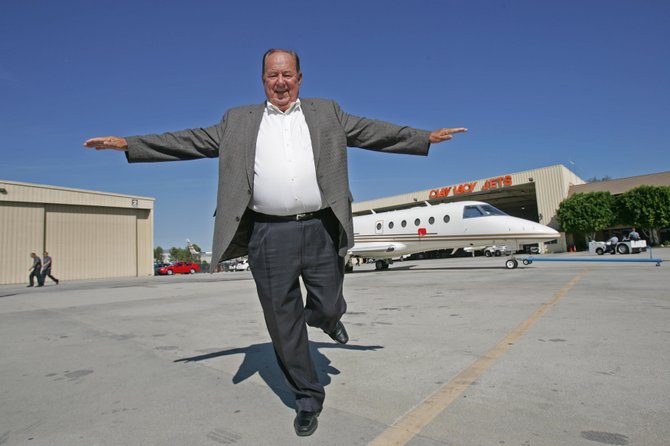 Clay Lacy, founder and chief executive of Clay Lacy Aviation, near one of the jet charter company’s aircraft at Van Nuys Airport. Photo by Ringo Chiu.

Clay Lacy has been in aviation for more than 60 years. When he was a boy in Wichita, Kan., his father fell ill with tuberculosis; the sanitarium was next to an airport and Lacy grew fascinated with the planes he’d see when waiting in the car while his mom visited. In his teens, Lacy worked at an airport in exchange for flying lessons and earned his pilot’s license at 16. He moved to California in 1952 at 19 to work as a pilot for United Airlines. He started private charter company Clay Lacy Aviation at Van Nuys Airport in 1968 while he continued flying for United. At his charter company, Lacy built a clientele of Hollywood stars and prominent local business people. Success allowed him to purchase three planes within his first few years. He’s also done a lot of work on “photo flights” – plane trips to capture images for movies – including scenes for the famous “Top Gun” film. He set a speed record for flying around the world, averaging more than 623 miles per hour. At 78, Lacy’s still involved in running the business, although he finds time to attend aviation conventions – one of his favorite things to do. Lacy, who hasn’t lost his Kansas twang, sat down with the Business Journal at his Van Nuys Airport office to talk about how his grandmother nurtured his passion for planes, his friendship with entertainer Danny Kaye and the best deal he ever got on a plane.

Answer: My dad contracted tuberculosis when I was quite young. He was in a tuberculosis sanitarium in those days and it was right out by the airport. I couldn’t go and see him because I was too young to go in there. So my mother would go there on Saturdays and Sundays, and she would leave me in the car and go out on the porch and sit there and talk with him. And I would watch the airplanes. When we would leave, my mother would drive me over to the airport to see the planes.

Your father didn’t survive the illness.

So was your mother an influential person in your life?

Not really, but my grandmother was. My grandmother was a very progressive thinker. I think she was the first woman in Kansas to have a driver’s license. And she had the airport on the farm so I could learn to fly.

Wait, your grandmother had an airport on her farm?

When I was 12 years old, I met a guy who was starting to buy surplus airplanes, the war was almost over. He told me that he wanted to start an airport and he said he’d like to put it on my grandmother’s farm. So I talked to her, and she’d never been up in an airplane at the time, but she knew how bad I wanted to fly and she said, “OK, I will talk to him.” And within three weeks, there were airplanes taking off and landing at the farm. He started bringing airplanes in and I started working there and by the time I was 16, I had a flight instructor’s rating.

You learned how to fly from people at the airport?

I was working at the airport and I was getting paid in flying time, not real money. I only worked a half-day outside of aviation, at a grocery store when I was 13 years old. I decided to get a job to have a few bucks to spend like my next-door neighbor. But when I was there for three hours, I decided that I didn’t really need any money and I wanted to go back to the airport and be around airplanes.

So your grandmother supported your dream of flying?

She was always extremely supportive and, in fact, I don’t remember anything I ever told her that I’d like to do that she wasn’t for.

How old were you when you first flew by yourself?

I was 14. It’s a different experience than anything else. When you take off in an airplane, you know it’s up to you to get back down. I believe it gives you a lot of self-confidence to fly solo; everyone who has flied solo gets a little bit of a different feeling about what they can do.

Then you moved to California in 1952 when you were 19 to be a pilot for United Airlines, and you also flew for the military.

Why did you join the National Guard?

When did you get into corporate aviation?

When Bill Lear came out with the Learjet, I went to visit him in Wichita and he said, “Anytime you can come back here, I will give you $100 a day to follow me around and tell me what you think.” And I did that a lot. I never did bill him because I had so much fun.

And you leased a plane from him?

I wanted to stay involved with the Lear, so I started my own charter company and I leased the Lear at first. I rented it for one year and then I bought one and two and three and just built it up as the business dictated.

And the business was successful?

Since I had been manager of sales for Lear, I knew almost everyone in town – almost everyone in Hollywood and a lot of other people who could afford to buy Learjets. When I started my own charter business, all I did was write a letter to many of the people who I had demonstrated the airplane to. And we were in the black the first month. It took me about two years before I had three airplanes.

How many planes do you own now?

More than I need. I think I own about (long pause) 15 airplanes. And of those, eight work and make money or I hope they make money. The other seven are either antique or unusual airplanes that I’ve kept.

What’s the best deal you’ve ever gotten for a plane?

What’s your favorite plane to fly?

If I’m just traveling with a few people, I like the little Lear. If I want to fly 300 people and go fast, then I like a 747. And then to just have fun, I have a plane called a Pilatus Porter. It’s the world’s shortest takeoff and land airplane. It will take off in 150 feet. I enjoy flying it because maybe I’m a little bit of a showoff, and I like to fly things that people have never seen like an airplane that can land across a runway instead of down a runway.

Did the military training help you develop the flying skills you need to do that?

What is photo flying?

We shoot every airline commercial you see on TV, for example. We film them on video and stills. And we also do a certain amount of Hollywood work. I shot “Top Gun,” “Flight of the Intruder” and “The Great Santini.”

What was your favorite movie to shoot?

The one that I had the most work in was probably “Top Gun.” About six months ago, I was introducing Tom Cruise at an event and I said, ‘When they called me to talk about this, they said, “Would you be interested in taking a piece of the picture in lieu of charging us a rate?’” And I took the script home and read it and I thought that this will never make it. And I said no. But when I made the decision, I didn’t know about Tom Cruise.

Did you get to know him?

I really didn’t get to know him too well on the movie. I don’t know him real well, but I’ve met him several times and it has to do with aviation.

You’ve met other celebrities through aviation, haven’t you?

Danny Kaye, I knew him really well. If he came back to life, he’d be one of two things: a doctor or a pilot, and he’d probably be a pilot. He loved flying; he loved aviation.

How did you meet him?

I demonstrated the Lear to him. I wanted to sell him a Learjet and he was so fascinated by it that he wanted to get into the business, not just buy an airplane. I introduced him to Bill Lear. Because of Danny I met a lot of people. He knew everyone.

Danny was a goodwill ambassador at large for Unicef, and we took trips for Unicef. We would land at airports and the White House and they’d have about 175 kids out there and Danny would jump out of the airplane and sing a song and then he’d tell them about Unicef. We would do it a few days before Halloween because the kids used to trick or treat for money for Unicef and the idea was to get press to bring more attention to Unicef.

Your around-the-world speed record was a charitable fundraiser, too, wasn’t it?

I set a speed record around the world in 1988 in a Boeing 747. The record was 36 hours and 54 minutes. Well the record is actually for average speed and it was like 620-some-odd miles per hour. That was a nice deal because at the same time we raised $530,000 for children’s charities.

It was interesting. We went eastbound, so the nights were six hours and the days were six hours. We flew through three sunsets, three sunrises, three days and three nights. I’ve flown around the world other times, but not straight through.

I’m not here every day now because I’m out traveling, usually on business. I’m gone at least two days a week. And I do a lot of still-photo flying, movie work and things. So that takes me away four days a month or so.

Do you fly yourself?

Not always. If I’m traveling by myself, I usually take the airlines. But we have so many airplanes going places that sometimes I can just hop on a plane.

I learned a lot of things from my friend Al Paulson of Gulfstream. He was one of my very closest friends for many years. Al would never look back. When things didn’t go right, he didn’t try to salvage things. He’d think that his time was better spent trying to make a better deal to make up for the thing that went wrong. He always looked ahead, and I’ve tried to have a little bit of that in my head, probably not as good as I should.

Do you have any retirement plans?

Well, I would sell this business if the right buyer came along. I’ve got a lot of toys I love, a boat and things, which I don’t have time to play with that I’d like to. But as far as thinking about retiring, I don’t know what it would mean. I would certainly want to stay busy and I would want to stay in aviation, I can’t imagine not flying as long as I’m healthy to do it.

MOST INFLUENTIAL PEOPLE: Grandmother May Callahan.