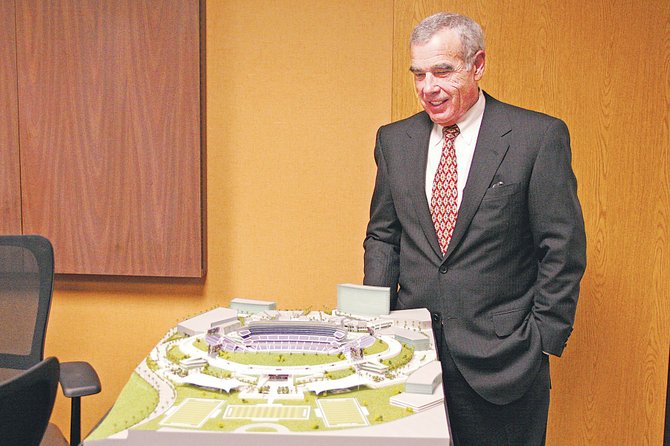 There’s little doubt that becoming a Hollywood mogul can take the work of a lifetime. But there may be one billionaires club even harder to break into.

Many of the 32 National Football League owners have held on to their clubs for decades. What’s more, they all get a say on who gets let in the door.

Now, his proposal, having hurdled several obstacles, faces yet another.

Roski finds himself in the middle of a billionaires’ tussle. And with his own business partner no less: Denver tycoon Philip Anschutz, owner of AEG, the sports, music and entertainment company.

Anschutz’s lieutenant, AEG Chief Executive Tim Leiweke, recently floated plans to build a downtown L.A. football stadium next to Staples Center, the arena that Anschutz and Roski partnered to build more than a decade ago.

This isn’t the first time that Roski, 71, has been countered by another mogul’s efforts to bring the NFL to Los Angeles.

In the late 1990s, Roski and billionaire Eli Broad backed a plan to renovate the Los Angeles Coliseum for a team. But a rival proposal by Hollywood super agent Michael Ovitz to build a stadium in Carson stymied Roski’s efforts. Ultimately, the NFL became frustrated with a lack of progress in Los Angeles and awarded the expansion team to Houston.

This time, though, the rivalry is closer to home.

Roski and Anschutz kicked off their sports association in 1995, when they bought the Kings for $113 million. The two worked together to build Staples Center and Roski remains a partner in the project, which is majority owned by AEG. They are also partners in the Los Angeles Lakers, though Roski is said to have a smaller ownership stake of both teams than AEG.

Still, for all their long association, the men are very different.

To get a sense of how much, consider the July 2007 groundbreaking for the Los Angeles Convention Center hotel at L.A. Live., the $2.5 billion mixed-use development next to Staples Center built by AEG.

Political and business luminaries gathered to sing each others’ praises and shovel some dirt at the site of the project, which was completed this month when the Ritz-Carlton Los Angeles hotel fully opened.

The governor was up on stage, along with Mayor Antonio Villaraigosa and Roski. But absent from the shovel-wielding cadre was no less than the project’s main financial backer, Anschutz, who lurked toward the back of the audience. Attendees didn’t even know the reclusive billionaire was there until Villaraigosa pointed him out during a speech.

It was illustrative of Anschutz’s style – always making moves, but decidedly out of the limelight.

Los Angeles Councilwoman Jan Perry, whose district includes L.A. Live, has met Anschutz a handful of times, and called him a visionary. But she admits she doesn’t know him well.

“Every time I see Phil he is so quiet and discreet that it’s just sort of surprising he’s there,” said Perry, who attended the 2007 hotel groundbreaking. “To me, it seems as if he has an air of humility about him.”

Shy certainly wouldn’t describe Roski, whom the Business Journal estimates has a $2.1 billion net worth. The former U.S. Marine is known for being a conservative businessman who doggedly pursues his interests, sometimes in a public manner. He’s also a rugged adventurer, having scaled Mount Kilimanjaro, climbed to Mount Everest base camp and explored the wreck of the Titantic in a Russian submersible.

That personality is reflected in the resolve he’s shown in building Majestic Realty Co., the family real estate business started by his father. The company, which specializes in industrial development, has a real estate portfolio of about 60 million square feet.

But Anschutz, 69, certainly isn’t viewed as a pushover, despite his public reticence. His retiring nature belies the sort of tenacity required to become one of the most powerful businessmen in the world with an estimated net worth of $6 billion, according to Forbes.

The Kansas native controls an empire that includes vast real estate, sports and entertainment holdings, including a large stake in Qwest Communications. Aside from the Kings and Lakers, he was a founder of Major League Soccer and owns the Los Angeles Galaxy and Houston Dynamo. In addition to Staples Center, AEG owns or operates venues worldwide, from Home Depot Center in Carson to London’s O2 Arena.

“They aren’t even in the same orbit,” said one sports facilities expert, who declined to comment on the record because of current business relationships with both parties. “(Ed’s) a developer, but he’s not an agent of change in sports.”

Roski and Anschutz declined to comment through their representatives. Because of the delicate and high-stakes nature of the situation, several friends and associates of Anschutz and Roski declined to comment on the record, but sources said their partnership is not what it once was.

Roski’s stadium plan is vastly different from the proposal being floated by AEG. His 75,000-seat stadium is slated for a 600-acre site in eastern Industry, where he once planned another industrial park before the economy tanked. Roski has pursued the proposal hard and claims it needs no public money, though the city is prepared to make some infrastructure improvements.

He fought off a lawsuit from a neighboring city and got the state Legislature to pass a bill that let his stadium bypass some state environmental standards. He also lined up the support of Gov. Arnold Schwarzenegger.

Meanwhile, the stadium being floated by AEG would be more complicated, expensive and right now seems more like a notion than a carefully developed proposal.

It would cost perhaps more than double Roski’s plan, which would easily put it at more than $1 billion. It’s unclear how the project would pencil out and whether any public financing would be needed. Wasserman Media Group founder Casey Wasserman would be a partner in the development.

Eventually Roski and Anschutz would have to convince NFL owners that they’ve got the best plan, and that won’t be easy. The NFL ownership club is a famously exclusive group and has long made it tough for new entrants.

For both men to be competing for the same prize can only mean one thing, according to some observers – not only have the two grown distant, but a full-fledged rift has developed.

At an event last week to mark the opening of the Ritz-Carlton Los Angeles, Leiweke several times made reference to the possibility of building a football stadium near L.A. Live.

“Ed Roski’s a great guy and has been a great partner,” said Leiweke, adding, “But wouldn’t it look great to have a football stadium next to Staples Center?”

L.A. businessman Steve Soboroff got to know Roski and Anschutz while, as senior adviser to former Mayor Richard Riordan, he worked to get Staples Center built. He dismissed the idea of a falling out.

“They are not oil and water – they are ham and eggs,” said Soboroff, a political player who recently stepped down as chief executive of Playa Capital Co., which built Playa Vista. “They work very well together and they are both great guys. The fact that they’ve done deals together doesn’t mean they have to do every deal together.”

But a top L.A. sports business executive who knows both billionaires isn’t so sure. He points to their past work together and their current divergent courses as evidence of a rift.

“How can there not be one? How could it be amicable?” said the executive, who declined to comment on the record because of ongoing business relationships with involved parties.

“Why would a partner do that? After years of it, they are saying, ‘We are going to do this now.’ It sends a message,” the executive said.