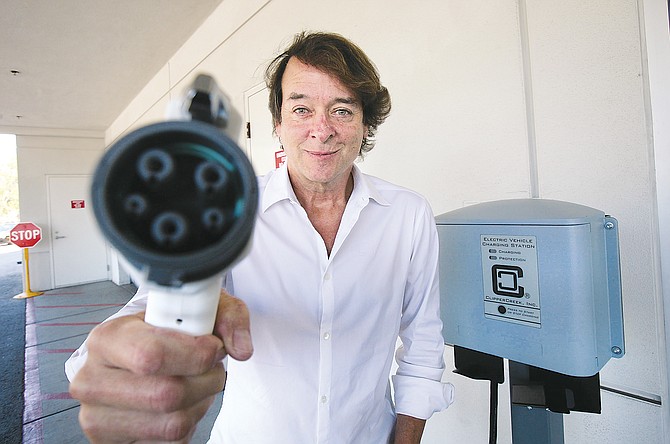 Mike Sullivan getting charged up. Photo by Ringo Chiu.

Car dealer Mike Sullivan will soon install charging stations on his lots – even though he hasn’t started selling the electric cars that will need them.

Why? Because he doesn’t think many customers will buy an electric car unless there are more charging stations around town.

“Anything to move the market forward is cool with me,” said Sullivan, who plans to let users plug in for free.

Such is the state of L.A.’s nascent electric car market.

Boosters of the alternative vehicles are quickly expanding the supply of charging stations, probably well in excess of the demand for them. Indeed, more than a hundred electric car-charging stations already are scattered across Los Angeles County and hundreds more are coming – even though experts believe it’ll be years before very many of the vehicles will be gliding noiselessly down local streets.

Although a slew of electric vehicles are scheduled to hit the market in 2011 – such as the Nissan Leaf, Chevy Volt, Tesla Model S, Coda and Fisker Karma – industry analysts said that they’ll still cater to a small niche of buyers for the next five years. As a result, it will take a while for all those charging stations to get much use, let alone become profitable.

“They’ll be underserved initially,” said Michael Omotoso, a senior manager of forecasting at J.D. Power and Associates in Agoura Hills who specializes in alternative energy vehicles. “There’s been a lot of hype regarding electric vehicles in the last year, but it will be a slow start.”

Industry experts predict that only 90,000 electric cars will be sold in the United States in 2015, or about one half of 1 percent of the total. Omotoso said that if the cars are successful, sales could start increasing at that point. As such, he believes the demand for charging stations will remain insignificant.

But there seems to be plenty of effort to jump-start the sector.

Sullivan, who owns 10 dealerships under the company name L.A. Car Guy, plans to install six charging stations at his dealerships, including Pacific Volkswagen in Hawthorne and Fisker Santa Monica.

It’s not a small matter. Each charger, supplied by Clipper Creek Inc., a manufacturer in Auburn northeast of Sacramento, will cost Sullivan $3,500 to install. But he won’t make drivers pay to use them – and he’ll even pick up the cost of electricity. The estimated cost of charging an electric car runs from $4 to $7.

Sullivan, who will begin selling the high-end electric car Karma from Irvine manufacturer Fisker Automotive early next year, is willing to eat those costs as an inducement.

“Part of this is selfish,” he said. “If I can make this easy for people, then there will be a wave of people who decide it makes sense to buy electric vehicles.”

But another part of his motivation is to promote environmentalism. He jumped at the opportunity to convert his Lexus Santa Monica store into a Fisker electric car dealership for that reason.

“The industry for the last 30 years was relatively dirty, but about 15 years ago I started to make a change. I saw that I could make it better,” he said.

Even though it’ll take a while to juice up demand for public charging stations, a number of them are on line or will be soon.

Sullivan’s stations will be a very small part of the inventory. The U.S. Department of Energy has sponsored a number of initiatives to build charging stations. As a result, Coulomb Technologies, a Campbell charging station manufacturer, will install more than 500 free charging stations throughout Los Angeles County by October 2011 with federal stimulus money.

What’s more, there are now close to 140 charging stations at various Ralphs grocery parking lots, museums and tourist attractions throughout the county, according to the Energy Department website. Many were installed in the late ’90s to accommodate the first electric car from General Motors, the EV1, but they mostly sit unused today.

When the Long Beach Aquarium of the Pacific was built in 1998, seven free charging stations were installed in its parking lot. But Barbara Long, vice president of government relations and strategic planning for the aquarium, said she rarely sees cars using them.

Even if the new round of electric vehicles brings some traffic to those public charging stations, they won’t become as popular as gas stations, Omatoso said. That’s because it can take anywhere from 30 minutes to eight hours to charge up an electric car, depending on the strength of the charger.

“People are impatient,” he said. “Standing there while your vehicle charges isn’t very attractive.”

Because of the long charging period, electric car dealers and charger manufacturers are recommending that customers install home charging stations where they can plug in overnight.

AeroVironment, a Monrovia charging station manufacturer, has a deal with Nissan to provide and install home chargers for customers who purchase the Leaf electric car.

Sullivan expects most of his Fisker customers will install chargers in their garages.

So if there will be relatively few electric car customers, and most of them will charge up at home, why bother with building so many public stations?

“It reduces the anxiety,” Sullivan said.

By creating an infrastructure of charging stations throughout Los Angeles, he said, it dispels a common question among many potential buyers: What happens if the battery runs too low to make it home?

“We don’t want customers to hesitate because they’re worried about being able to plug a vehicle in,” he said.

Businesses selected to receive the free charging stations won’t be expected to pay for the cost of electricity until the grant ends in 2013. This could make the program attractive to businesses interested in testing the waters but not willing to risk losing money on the stations.

“It’s hard from a business owner perspective to invest in this before a car gets here,” Jones said. “Businesses typically respond to the market instead of anticipating it.”

But industry analyst Omotoso said businesses and charging station providers should remain cautious about installing chargers before the demand for electric cars materializes.