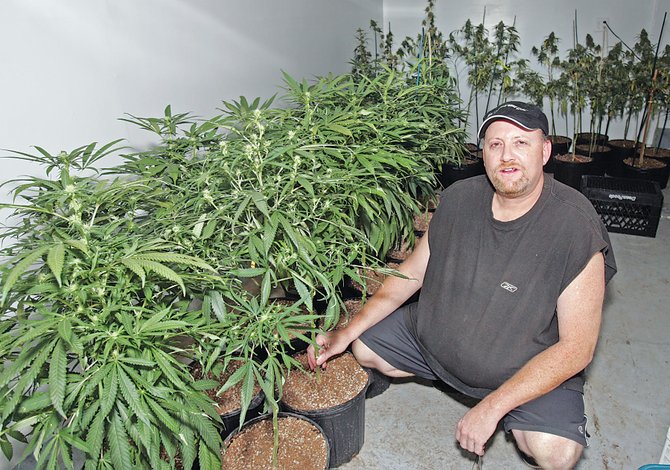 Despite L.A.’s recent and well-publicized crackdown on pot shops, another side of the industry is thriving: the growers.

With state law encouraging shops to grow their own marijuana rather than get supplies on the black market – often from Northern California – demand is rising for pot grown in small indoor facilities across Los Angeles County.

There are no official statistics on the number of pot growers in the region, but dispensary operators estimate the number to be in the thousands – and rising. Hundreds have signed up for classes teaching growing techniques.

What’s more, overall pot demand has remained strong as customers of the closed shops have migrated to home delivery services or to the remaining dispensaries.

One local grower, Matthew Cohen, who owns the Natural Way dispensary on Pico Boulevard east of Fairfax Avenue, said he’s been paid as a consultant to help about 140 people set up small-scale pot farms in their homes, most of them in the last two years.

“You could go to the roof of my store with a nice baseball and start hitting apartments around us where people are growing marijuana,” Cohen said. “They’re doing it because they want to pay their mortgages, or they want to pay for their kids’ school.”

Indeed, there is good money to be made.

A skilled grower with as few as six plants can harvest about a pound of marijuana a month. Collectives pay roughly $2,000 to $4,000 per pound, allowing even small growers to make a healthy side income of $25,000 to nearly $50,000 annually. Large growers, of course, can make much more.

The rise of the growing industry has mirrored the rapid establishment of pot shops and delivery services in Los Angeles. It also presents similar obstacles to regulation while operating under comparably murky laws.

The initiative that legalized medical marijuana in 1996 did not address cultivation. But in 2003, the Medical Marijuana Program Act passed by the state Legislature allowed a patient to possess six mature plants and allowed “collective, cooperative cultivation projects.”

Under one interpretation of the guidelines, one person supplying 10 collective members would be able to grow up to 60 plants. However, in January, the state Supreme Court struck down the six-plant limit as unconstitutional, creating a gray area in regard to cultivation.

Most collectives simply suggest growing no more than 99 plants, to avoid a federally mandated five-year minimum prison sentence for people caught with more than that amount. But some collectives have stretched the law.

Last October, the City Attorney’s Office of Los Angeles sued the Eagle Rock collective Hemp Factory V for unlawful marijuana sales. During a deposition, the dispensary operator said that he and six other growers were responsible for growing for as many as 500 to 600 members, which authorities charged was illegal.

But Assistant City Attorney Asha Greenberg said her office, swamped with illegal pot shop cases, has not directly prosecuted collectives for growing violations. Instead, unlawful sales have been the primary focus, with violations for cultivation a secondary issue once a case is filed. That was how the Hemp Factory V case proceeded.

“At so many of these places, the members are not collectively cultivating marijuana,” Greenberg said. “They’re either getting it from outside sources or there are a few people growing for hundreds other people.”

When Cohen opened Natural Way in 2006, he got his marijuana trucked down from Northern California’s Emerald Triangle – the nickname given to the state’s hub of marijuana production in Mendocino, Humboldt and Trinity counties – despite the questionable legality of it.

But two years ago, spurred by the recession and guidelines issued by the California attorney general in 2008 that clarified that patients could grow their own marijuana, members began coming into his shop wanting to sell home-grown pot.

In 2009, the dispensary began growing its own plants. Today, the collective’s 2,300 members are supplied by a combination of 75 on-site plants and about 60 patient growers, who are paid roughly $3,000 per pound, depending on the quality.

“Two years ago, I bet you 80 percent of it came from NorCal; today, almost none of it,” said Cohen, standing next to several dozen small plants bathed in grow lights.

Cohen said the local growing industry gradually expanded because when the first pot shops opened in 2005 there wasn’t a base of members skilled in growing pot.

“It takes time. A lot of shops didn’t have growers at first,” he said,

He declined to identify the exact location, how much he produces or the price received from the collective. But he said he is one of about 40 members of the 80-member service who grow their own marijuana and sell back extra.

“Most of the people I know that do grow medicine have their own jobs and just grow a little for themselves. And anything extra they share with the collective for some compensation,” said Chan, adding that no one’s quit their day job yet but “you definitely could.”

A former air-conditioning and heating contractor, Chan has expertise in setting up electrical wiring for automated hydroponic systems, in which marijuana plants are grown in water rather than soil. More than 150 people have taken Chan’s class in the eight months it’s been offered.

It’s relatively easy and inexpensive for first-time growers to get started. A home-grow operation can be set up for as little as $1,000, though the system Chan teaches costs about $3,000, and can include bells and whistles such as automated fire extinguishers. Clones, or young plants, can be bought for $10 to $30 each, with seeds going for less. Recurring costs also are low, relative to the pot’s selling price. Electricity and nutrients can amount to only $150 per month for six plants.

The growing industry is even attracting outsiders. Oaksterdam University, an Oakland-based school founded in 2008 that trains dispensary operators and growers, currently enrolls about 180 students per semester in its L.A. branch, said campus manager Carrie Harger.

Local growers such as Chan champion indoor cultivation, which they claim allows for more consistent results.

With names like Blueberry Kush or Thai Skunk, today’s indoor strains promise exotic flavors and specific highs. It’s a long way from the pot that was smoked in college dorms just a few decades ago. Today’s strains have many times the level of THC, the active ingredient that produces the high and is said to have medical uses, such as relieving nausea from chemotherapy.

In fact, the demand for marijuana grown indoors has contributed to a drop in prices for some of the pot grown in the Emerald Triangle, much of which is grown outdoors.

“There’s a feeling that the quality of indoor pot is better, and certainly they come up with more reproducible and reliable strains which seem to have more of a brand cache to it,” said Dale Gieringer, California director of the National Organization for the Reform of Marijuana Laws (NORML), a group that advocates marijuana legalization.

“A lot of the outdoor growers from Northern California are talking about how difficult it is to unload pot in the medical market. They’re selling less of the total pot sold in Los Angeles,” Gieringer said.

Nobody knows how many collectives are growing their own marijuana locally rather than obtaining it from up north or off the streets. Estimates by the collectives themselves range from as high as 95 percent being home-grown to less than half. But most agree that the trend is pointing toward more local growers.

Michael Backes, a board member of the Cornerstone Research Collective, said the Eagle Rock collective has about 20 patient growers for more than 1,000 registered members, although only about 300 are active members.

“When we first opened up we had people roll in with big bags from Northern California trying to sell us meds, and honestly we would get four to five calls a week from people,” he said. “We get maybe one or two a month, tops, now.”

Cornerstone’s operators plan to move its offices elsewhere in the next year, and to begin growing on-site at that point.

Meanwhile, the growers continue to operate under the threat of possible seizure, though these days that seems unlikely given the murkiness of the law.

Greenberg maintains that the buying and selling of marijuana between growers and collectives is illegal, saying, “If you have a seller or buyer, I don’t think that’s collective cultivation. I think the whole concept of a collective or cooperative is everything has to be pooled.”

But she also acknowledged that there is “no hard and fast law as far as how a collective would operate.” Indeed, much of her stance has not been tested in court.

Growers have not been explicitly barred by the courts from belonging to and selling to multiple collectives, or from belonging to collectives in more than one county (though the city’s June 7 medical marijuana ordinance prevents membership in more than one collective). State law also allows growers to be reimbursed for their costs, and courts have not ruled whether this applies to their labor or how much that labor is worth.

Another issue is that law enforcement has bigger concerns, including large growing operations in California’s national forests. It’s believed the majority of marijuana produced there are for street sales.

“Most of the raids that we do have to do with large marijuana groves,” said Steve Whitmore, spokesman for the Los Angeles County Sheriff’s Department. “What the state law allows for is infinitesimal.”

Indeed, authorities have their hands full. In 2009, total marijuana seizures in the county hit 340,187 plants, more than four times the level of 2008. At least 150,000 were found in large plots in the Angeles National Forest that in some cases may have been operated by Mexican drug cartels.

However, Roger Morgan, executive director of the Coalition for a Drug Free California, said the vast number of small-scale growers is becoming a problem in itself.

“The proliferation of grow sites has really gotten out of hand,” he said. “Let’s say you’re growing 10 plants. That’s the equivalent of 12,000 joints. What are you going to do with the excess? This doesn’t limit a black market, it actually creates one. There’s just too much.”

Bill Leahy, general manager of the Farmacy, which has storefronts in Westwood, Venice and West Hollywood, disputed the idea that collective growers are mostly out to make money. He said hundreds of the collective’s roughly 5,000 members are growers.

“It’s a lot of work. You have to go around daily to each plant and care for it and look for bugs, look for what’s happening,” he said. “I talked to one grower and when it’s all said and done he makes about $18 an hour.”

Whether growers are making big or small money, dispensary owner Cohen said the reality for law enforcement is that the industry has spread throughout Los Angeles.

“Let’s be quite honest: Nobody wants to roust somebody who’s owned a home for 15 years in the neighborhood that’s growing 15 or 20 plants of pot,” he said. “There’s just so many of them now.”