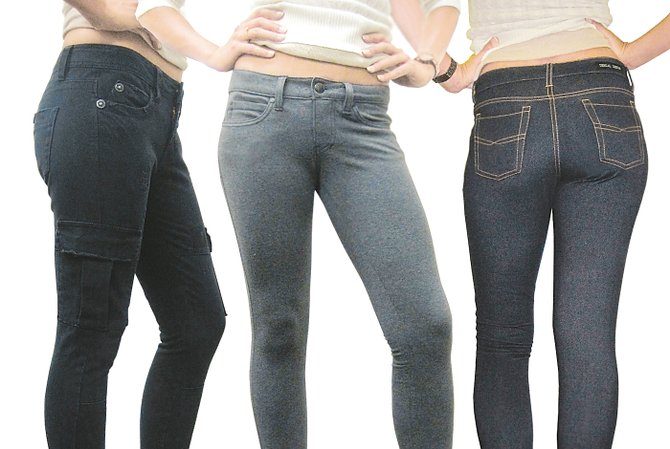 Evy of California scored a success with its Jalate “jeggings” – skin-tight jeans that resemble leggings more than trousers. The item was a hot seller at Nordstrom last year.

So the company, which has been in the jeans business since it bought Jalate Regulated Denim in 2004, launched Denial, a brand to appeal to shoppers looking for the same style in higher quality. The fabric, zippers and distressed look on Denial pants were designed to appeal to Nordstrom customers. Jalate pairs sell for $20 to $36; Denial’s range is from $36 to $70. Both lines are mostly denim but include some nondenim trousers, too.

Denial jeans are now available at Nordstrom, along with upscale Midwest department store Von Maur. Evy, a downtown L.A. company, is planning to sell the line at other upscale retailers by the end of this year.

“We’ve opened up an opportunity with some better department stores to do their price points,” said Kevin Krieser, president and chief operating officer at Evy.

Sales for the Jalate line doubled during the previous two years thanks to the popularity of the jeggings.

Krieser said Evy’s jeggings made up 6 percent of sales of Nordstrom’s junior bottoms in 2009. That prompted the company to approach the chain with the idea of creating a slightly more expensive line of bottoms.

“They liked that we can operate at a higher price point that’s still attractive to their customers and still pushes the limits in the design,” Krieser said.

Jeremiah Higgins hadn’t planned for a career in the restaurant industry – he wanted to be in show biz so he went to USC and studied film.

But Higgins later found success as a restaurant executive. About a year and a half ago, he teamed up with former Los Angeles Galaxy player Cobi Jones and chef Scott Leibfried to form Santa Monica consultancy HJL Group Restaurant Advisors.

HJL Group is now preparing for the August launch of an instructional website for restaurant owners and chefs. The site, called Evolve, sells how-to guides, recipes and training videos.

Higgins said HJL wants Evolve to be a one-stop site for the hospitality industry, where restaurant owners and managers can get any guidance they need. The site is designed to function as a virtual consultant, and restaurateurs should be able to call it up to learn how to manage any kind of eatery.

Meanwhile, the group is not just teaching, but doing.

HJL Group is set to open Santa Barbara restaurant Arch Rock Fish in August. The group is looking to open two L.A.-area restaurants during the next two years, a Mexican eatery called El Mundo and an oyster bar called West Coast Oysters. The partners are looking for locations.

The Ron Robinson boutique at Fred Segal is now selling designer adult toys – a first for the trendy shopping destination.

Ron Robinson, located inside the Fred Segal on Melrose Avenue, began selling the high-end adult toys made by Swedish company Lelo in June. Prices range from $89 to $1,500.

Robinson, who owns the self-named boutique, said in a statement that he expects the Lelo products to be a hit with Fred Segal shoppers.

“We expect our customers will be delighted with the elegance, excitement and functionality of Lelo,” Robinson said.

Plans to spruce up downtown L.A.’s Fashion District advanced in June when the Los Angeles Community Redevelopment Agency selected Aecom Technology Corp. to begin a study of the area.

About 25 employees from downtown L.A.-based Aecom will work on the yearlong, $1 million study, called Fashion District Design for Development. The goal is to lay out options for transforming the 101-square-block district into a 24-hour community that will offer housing, parks, restaurants, entertainment venues, hotels and retailers.

Matthew Mason, a city planner who oversees the downtown region for the CRA, said the agency selected Aecom because the engineering and design firm displayed a grasp of how the district’s apparel manufacturers, wholesalers and showrooms operate.

“They presented a case that showed that they understood the complexities of the Fashion District as it exists today,” Mason said.

The study will also recommend action on more immediate improvement, including better lighting in the crammed Santee Alley and the updating of antiquated storm drains. But it will also address long-term improvements such as zoning changes that will make it easier for the district to lure mixed-use projects.