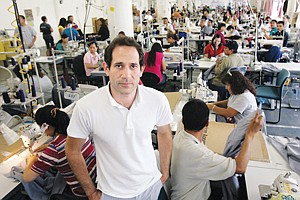 Even with record unemployment, American Apparel’s chief, Dov Charney, can’t hire enough factory workers. He’s even walked the streets of Alhambra himself, handing out fliers printed in Chinese and Spanish, advertising for cuttting and knitting jobs that pay $8 to $18 an hour.

Why the struggle? He lost 2,500 workers – more than half his factory staff – after an immigration crackdown by the federal government. Charney said most applicants don’t have documentation showing they can legally work in the United States.

“Hiring workers isn’t easy,” he said. “Even when we advertise that you need to have solid immigration documents, people still come with false IDs.”

But hiring enough workers to make American Apparel’s signature T-shirts, skin-tight leggings and mesh bodysuits is just one of the challenges faced by the downtown L.A. company – the largest clothing company that still manufactures domestically.

American Apparel’s same-store sales dropped 10 percent in 2009, and Charney wants to change that by adding collared shirts and other clothing that’s more complicated – but more expensive to make. Also, the company announced June 24 that it escaped defaulting on a credit agreement, but its new interest rate is a high 17 percent. As if that weren’t enough, Beverly Hills billionaire investor Ron Burkle has acquired a 6 percent stake in the company and is likely to want a say in how Charney runs his show.

“Some people would say these are problems,” Charney said during an interview last week at the downtown headquarters of American Apparel, which has more than 10,000 employees and 280 retail stores in 20 countries. “And some would say they are opportunities that we have as we repair these things, go through them and learn.”

Whether you look at them as challenges or opportunities, it’s been a wild ride for Charney and his company since September, when American Apparel was forced to fire more than 1,500 immigrant employees – about one-third of its factory work force at the time. The firings were a result of an investigation by the federal Immigration and Customs Enforcement agency. The employees’ documents didn’t match federal Social Security or immigration records.

Charney, a Canadian native and outspoken advocate for giving immigrants the right to work in the United States, said that about 1,000 additional employees quit soon after because they feared they’d get caught in the crackdown, too.

The loss of workers presented American Apparel with the formidable challenge of hiring and training factory workers.

The company was never accused of knowingly hiring illegal immigrants, but it tightened its hiring procedures to comply with documentation requirements. And in an effort to restaff its factories in South Gate, Garden Grove and downtown Los Angeles, the company spent more than $1 million on job advertisements in Spanish-language daily newspaper La Opinion, Spanish-language radio stations and four Chinese-language daily newspapers. The restaffing has not gone quickly.

“We have less people to pick from. Most of the clothing that’s made in L.A. for the major brands is made by undocumented workers, except for at American Apparel,” he said.

The company ramped up its recruiting in April, but Charney said that at first only about 100 of 1,000 applicants could provide proper documents. That’s now gone up to about 500 of 1,000. The company has hired about 1,200 factory workers in the past few months.

But American Apparel still has to invest time and resources into training new workers, although Charney said he wasn’t able to specify how much.

“The fact of the matter is that people are working at 20 percent efficiency once they are hired, so we have to pay them more than they are worth when we are training them,” he said.

At first, American Apparel believed the firings wouldn’t greatly hurt the company’s manufacturing capabilities because production traditionally slows during the winter, when consumer demand for the company’s warm-weather clothing declines.

However, Charney now acknowledges that a shortage of skilled workers affected the company’s production process. In its preliminary financial results for the quarter ended March 31, American Apparel said its operating income was reduced by $4.4 million because the company’s manufacturing efficiency dropped.

At the same time, American Apparel has been focused on boosting its top line. Its same-store sales – a key indicator of a retailer’s financial performance – declined 11 out of 12 months in 2009 and dropped again in the first quarter of this year.

Charney wants to meet his consumers’ changing tastes by designing and producing collared shirts, pleated pants and similar items that are more intricate than the company’s typical T-shirts and the like. In other words, he wants new products to appeal to his customers as they mature.

Of course, this move to more complicated manufacturing comes at the same time the company is unusually reliant on inexperienced workers.

“In the beginning, because the layoffs took place in the fall, we didn’t feel it as much,” Charney said “But it had a much greater impact than we expected. And to make things worse, we decided to increase the sophistication of the product line. Things are very competitive right now and we want to stay one step ahead, but we couldn’t make the new products we wanted to make because of the inexperienced workers we had.”

Will Charney’s plan to expand the company’s fashion offerings work?

Ilse Metchek, executive director of the California Fashion Association, believes American Apparel should focus on adding items such as sweaters in order to complement the company’s basic product lineup.

“To do button-down shirts and slacks and things like that, he can’t be competitive. And the fit and pattern-making for those is crucial,” Metchek said. “He has to stay with small, medium and large.”

Charney acknowledged that it’s been a struggle finding the right way to add more complicated clothes to the American Apparel mix, but he said the company needs to reinvent itself or face the risk of going out of style.

“It’s been a progression over time, but we’ve been trying constantly to reinvent the brand,” Charney said. “We wanted to, for a lack of a better description, increase the sophistication of the line because we feel our customer is getting older, more sophisticated and they are more aspirational.”

At his headquarters last week, Charney showed an assistant an old rugby shirt and a vintage pair of Levi’s, suggesting that the company use them as starting points – emulating patterns and fits. His focus was on clothing design at that moment; Charney’s always been the creative force at the company. But he may soon be hearing input from another notable L.A. personality: his new investor, Burkle.

Burkle, who started building his billion-dollar fortune by investing in currencies, commodities and then small grocery stores, is familiar with the retail industry.

He’s invested in Sean “Diddy” Combs’ clothing line, Whole Foods Market and Barnes & Noble. Most recently, the activist investor has been in a power struggle with Barnes & Noble. He’s been amassing shares and the bookstore chain has been trying to stop him in order to limit his input on operations.

Burkle is now the largest shareholder of American Apparel behind Charney, who has 53 percent. A representative for Burkle didn’t return requests seeking comment. A filing with the Securities and Exchange Commission said he “intends to closely monitor the company’s performance” and will “express his views.”

“He’s not a hands-off, passive investor,” said Lloyd Greif, chief executive of downtown L.A. investment banking firm Greif & Co. and a longtime friend and adviser to Burkle. “He’s a front-seat investor. And I expect he will be contributing to the day-to-day management and operations of the business.”

Charney is so thoroughly involved in that day-to-day management that he called employees by their first names when he walked the factory floor and gave them assignments. He chatted with a designer and a pattern cutter, and even rubbed a “Made in USA” tag against his face in order to test its softness. How will he respond if Burkle tells him how to run things?

Charney said there’s an opportunity for Burkle to contribute his expertise to the company’s existing management team.

“I think there’s a relationship that can be cultivated, and he can play a role,” he said.

The arrival of Burkle on the American Apparel scene coincides with another step in Charney’s ongoing battle with debt, specifically, a credit agreement with lender Lion Capital LLC, a London private equity firm.

During the credit crisis, the company Apparel found itself in need of cash to pay off a $51 million problem debt to a New York private investment firm. So in March 2009, Lion Capital gave the company a last-minute $80 million loan, easing pressure on its financial problems.

American Apparel then warned investors this March that it wouldn’t be able to meet the debt-to-earnings ratio required under its agreement with Lion Capital by the end of June. After months of negotiations, company executives were able to work out a deal with Lion that eliminates the restriction on the amount of debt it can hold relative to EBITDA, or its earnings before interest, taxes, depreciation and amortization.

But under the new credit terms, American Apparel has to hit a profit target for four consecutive quarters. The company has to report a total EBITDA of $20 million for the period from July 2009 to the quarter ended June 30 of this year. The company is still calculating its financials, although initial figures show that it’s likely to meet the terms. If it doesn’t, Lion can declare default and can press for management changes.

“Lion is still cutting them a break,” Schmitt said. “They want the company to do well and they want to get their debt repaid.”

However, the renegotiated agreement with Lion comes at a steep price: It increases the annual interest rate from 15 percent to 17 percent and gives board representation to the firm in addition to options for 16 million shares at $2 each. American Apparel was trading at less than $2 last week.

Schmitt said the increased interest rate shows that Lion still views that its investment in American Apparel is risky.

“It just signifies higher risk,” Schmitt said. “And it’s a signal. It’s an assertion of their authority, their control and their place in the capital structure.”

“The covenants have been renegotiated in such a way that there will be no default in the near future,” Charney said. “And it can be refinanced at any time with another interest rate. And if we can refinance, we will.”

There is some skepticism about the future of the company. A June article by Reuters questioned whether the company would be better off if Charney stuck to his role as fashion guru and left the business operations to a more experienced chief executive.

“There’s a lot of sophistication to how we operate, probably more sophistication than people realize,” Charney said. “And I’ve seen people that have sophisticated backgrounds that weren’t able to execute. So we are very committed to building a very strong operational team and we are committed to corporate orthodoxy in terms of making sure that things are done timely, that’s there a perfect coordination of the production system, the distribution system, and bringing it all together from a planning and structural point of view.”

But finally, Charney acknowledged – after an uncharacteristically long pause for some thought – that he’s gotten an education over the past year.

“You are on a journey, it’s hard to say what all the lessons are,” he said.

“But, you know, there’ve been a lot of lessons,” he said. He paused. “Some of them I might only share with myself.”