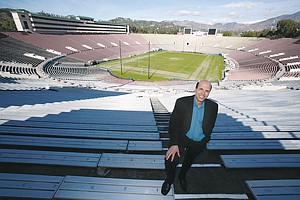 A Rose Bowl entrance gate named after Coca-Cola? Wedding receptions in the press box of the venerable venue?

Stadium and city officials in Pasadena are seeking ways to pay for the largest renovation in the history of the Rose Bowl. Options include selling corporate sponsorship rights to stadium gates and scoreboards, and opening up the venue to events such as weddings. Officials also may pursue federally subsidized bonds or simply ask for donations.

Of all those possibilities, increased advertising at the stadium would represent the most significant change for the Rose Bowl. Unlike most other big arenas, the Pasadena venue hasn’t been plastered with ads. Darryl Dunn, chief executive and general manager of the city-owned stadium, said he wanted to preserve its clean look.

“But if we’re going to make improvements, we have to pay for it somehow,” he said.

The renovations, which are expected to cost between $160 million and $170 million, are still in the planning stages. Officials hope to break ground on the improvements in 2011 and wrap them up by Jan. 1, 2014 – just in time for the 100th Rose Bowl game.

Stadium officials and supporters said the planned improvements are long overdue and will bring the 87-year-old Rose Bowl up to par with more modern stadiums.

The renovations would increase the size of the facility’s press box and expand the number of premium seats from 500 to more than 2,000, add a state-of-the-art video screen as well as a vintage scoreboard from the 1940s, widen the stadium’s access tunnels, and add concession stands and restrooms.

Several rows of field-level seats would be torn out and replaced with a line of hedges. Old plumbing and electrical wiring that hasn’t been touched for more than a decade would also be upgraded.

“This is really more than anything else the right thing to do and the right time to do it,” Dunn said. “The stadium is 87 years old, construction costs are low, interest rates are low and there’s momentum.”

It could also inject new vigor into a stadium that in past years has lost money. As recently as 2005, the Rose Bowl lost around $2 million. Dunn said figures for the current fiscal year haven’t been tallied yet, but he expected the Rose Bowl will be profitable.

To pay for the plan’s hefty price tag, officials are exploring ideas they haven’t before, including soliciting private donations. Andrea Van de Kamp, a well-known figure in L.A. philanthropic circles who had led the campaign to raise money for the Walt Disney Concert Hall, is leading a study on the feasibility of a donation campaign and how it could be conducted.

The Rose Bowl may also renegotiate its leases with its two biggest tenants, UCLA, for football games, and the Tournament of Roses, which oversees the annual New Year’s Day college bowl game.

But the main sources of revenue to pay back construction costs would be added luxury seats and more opportunities for advertisers.

While the Rose Bowl sells advertising space over the stadium’s gates, officials may consider selling naming rights to the gates themselves – now labeled by letters. That would potentially pave the way for the “Bank of America Gate” or the “Coca-Cola Gate.”

Rose Bowl officials will have to walk a fine line as they explore opening up the stadium to more corporate signage, said David Carter, executive director of the USC Sports Business Institute.

“They are going to have to thread the needle between what protects the integrity but yields the revenue opportunities to make sure that the building stays viable,” he said.

Complicating things somewhat is the fact that the Rose Bowl has National Historic Landmark status, which limits what changes can be made to its appearance. It also means local preservation groups will keep a close eye on developments.

Sue Mossman, executive director of preservation group Pasadena Heritage, said she understood the need for more advertising at the Rose Bowl. But she believes it has to be done with respect for the venue’s integrity.

“I think there is room for a well-designed corporate sponsorship program and effective, appropriate advertising that does not detract from the experience of being at the Rose Bowl,” she said.

Support from preservationists is crucial. In 2003 and 2005, they played a role in derailing talks over dramatically overhauling the stadium with the goal of attracting a National Football League team. One of the proposals had called for doubling the size of the Rose Bowl and adding a 2,000-space underground parking garage.

After those proposals died, Rose Bowl officials still insisted the stadium needed to be renovated to keep pace with newer venues. Another factor in the equation is a proposed $800 million football stadium and entertainment complex in the City of Industry. That stadium, which could become a competitor for big events, is backed by real estate billionaire Ed Roski Jr. The project received a boost in October when the governor signed legislation that exempted it from state environmental laws. Roski is waiting for an NFL team to sign on as his tenant before proceeding with the plan.

Rose Bowl officials point to what happened at the Cotton Bowl in Dallas and the Orange Bowl in Miami as cautionary tales: Both stadiums housed storied college football bowl games for decades, only to lose them to more modern stadiums.

“If we don’t do this, the risk is enormous that the Rose Bowl will become obsolete,” Dunn said.

That could be devastating to local businesses that reap substantial revenue from Rose Bowl events. The annual Rose Bowl game brings in visitors from across the country, which in turns injects about $22 million into the Pasadena economy, said Paul Little, president and chief executive of the Pasadena Chamber of Commerce.

Little estimated that other large events – such as a U2 concert and the BCS National Championship college football game, both of which were hosted by the Rose Bowl in 2009 – bring about the same amount of money to Pasadena hotels, restaurants and shops. As a result, the stadium is a significant factor in the city’s economic health.

Under its permit, the venue can host 12 major events – defined as those that draw more than 20,000 people – each year. Typically it books 10 such events, and officials hope that modernizing the stadium will help it book the maximum.

But if the city fails to come up with the money for the renovations, the stadium could lose events.

“This past year was a gigantic year for the Rose Bowl, with the U2 concert and the BCS game,” said Carter of the USC Sports Business Institute. “But that type of year will prove to be an extraordinary anomaly if they don’t upgrade.”