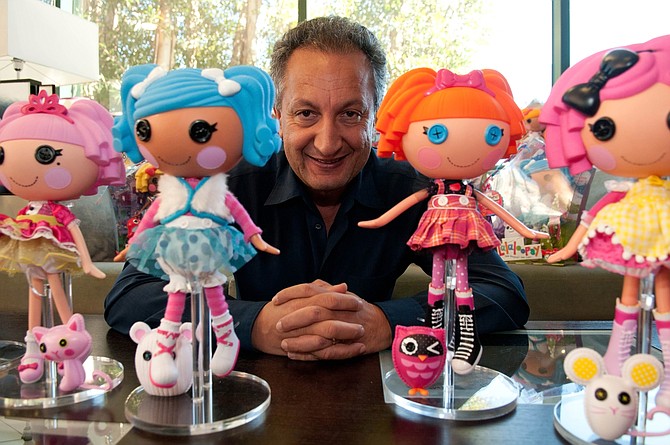 Bratzmeister Isaac Larian isn’t kidding around in a dispute with the toy industry’s leading trade group.

The chief executive of MGA Entertainment Inc. has long believed his dolls get dissed in favor of his arch rival Mattel Inc. when it comes time for the Toy Industry Association’s annual awards.

Now, he thinks his hot-selling line of rag-dollish Lalaloopsies didn’t get its due. The association didn’t nominate the dolls, which have been called a surprise hit by some analysts, for any of the prestigious Toy of the Year Awards, considered the Oscars of the play industry.

The omission prompted him to send a scathing letter to the organization’s president and members of the media. Larian questioned whether Mattel of El Segundo pressured the group to snub Van Nuys-based MGA and its Lalaloopsy line, which he himself submitted for consideration.

“Lalaloopsy should have been nominated, there is no question about it,” Larian said during an interview. “But our friends in El Segundo make dolls and they are sitting on the association’s board and God forbid another company comes up with a doll that’s popular.”

In a Nov. 29 letter to the association’s president, Carter Keithley, Larian called for the group to make changes in how it operates.

“It is time for special interest politics within the TIA to be set aside,” he wrote.

Mattel declined to comment on Larian’s claims. But Stacy Leistner, vice president of communications for TIA, said the organization isn’t swayed by any member in its annual awards or its overall operations.

Larian pulled out of the group in an earlier dispute. Leistner said both member and nonmember toymakers can submit products for consideration for the 11 different award categories. Each category’s nominees are then selected by committees of retailers, academics, inventors, designers, journalists and bloggers. Award winners are determined by association members; journalists; retailers; and consumers, whose votes are weighted.

“Neither TIA staff nor TIA members have any influence,” Leistner said.

MGA’s Lalaloopsy doll, an updated version of a rag doll outfitted with fashionable clothes and button eyes, started selling at mass retailers and toystores in August and became a surprise hit. A spokesman for Toys “R” Us, which featured Lalaloopsy on its Holiday Hot Toy List, said the doll’s been selling “very well.”

Jim Silver, editor in chief of online trade publication TimetoPlayMag.com, said Lalaloopsy has been the breakout hit of the season. Silver said he understands Larian’s displeasure with the association over the snub of the dolls.

“He’s got one of the hot toys of the year and it’s not being nominated,” said Silver, whose publication recently named Lalaloopsy this year’s best large doll. “I don’t think it’s political. But you would be frustrated and wonder why it hasn’t been nominated.”

The association is a New York-based non-profit that promotes the industry through trade shows and also represents toymakers on matters such as product safety.

The battle over the awards is not sheer vanity. When MGA launched Bratz in 2001, the wide-eyed, pouty-lipped dolls won the association’s People’s Choice award on a vote by consumers. Bratz has since become a major force in the toy industry.

“We were a small toy company and that recognition was good for our people,” Larian recalled. “And that’s what I’m fighting for.”

Bratz won the People’s Choice award again in 2002. But Larian claims the association got rid of the category for its 2003 awards at the urging of Mattel, whose president of Mattel Brands, Neil Freidman, was then serving as vice chairman.

Mattel’s Fisher-Price unit was honored for its Hokey Pokey Elmo at the 2003 awards. Larian said he asked the association to the see votes because many retailers and journalists told him they’d voted for Bratz, but the group denied his request. So he pulled MGA’s membership and hasn’t rejoined.

Meanwhile, MGA got into bruising litigation with Mattel over ownership of Bratz.

The six-year fight began when Mattel claimed that Bratz was created by a doll designer while he was still working for Mattel. Mattel was eventually awarded ownership of the Bratz line and $100 million in damages, but the Ninth U.S. Circuit Court of Appeal reversed the ruling. The case is set for a new trial in January.

Larian said the battle over the awards is unrelated to the Bratz conflict. In his November letter to the association, however, Larian took the opportunity to point out that Mattel is the biggest financial contributor and that one of the company’s executives, Bryan Stockton, is association chairman.

Larian said that the association’s “miss” of Lalaloopsy showed that it was out of touch and needs reform.

He called his dolls, which sell for $24.99, the “hottest selling toy this fall.” They have different personalities based on the fabrics used to create them. For example, the storyline for Spot Splatter Splash is that she came to life after being made with fabric from a painter’s overalls.

Larian said the organization is now overly dependent on a few large companies for its financing. He added that he has asked to sit on the association’s board for several years, but said his requests have been met with excuses such as “the selection process has been closed.”

The association is primarily funded by membership dues, determined by the size of the member company. Board members select candidates as peers, then submit them for approval by the entire membership. The current board includes executives from small, medium and large companies, although Larian believes smaller companies are underrepresented.

Association spokesman Leistner said the organization, which also generates revenue from its trade shows and other industry-related events, doesn’t cave in to pressure from large companies.

“I don’t think that we could be an effective association if we were aligned with the interests and needs of only a single company,” Leistner said. “That would be counter to why we exist.”

The board currently includes two Mattel employees in addition to individuals from major toymakers such as Hasbro and Lego, and representatives from smaller ones such as Funrise Toy, which is also based in Van Nuys, and Itoys.

Larian said the association would benefit from more involvement by small toymakers because they create the most innovative products.

“They need to bring in these smaller toy companies into the mix,” Larian said. “That’s what will bring excitement and legitimacy to the TIA.”