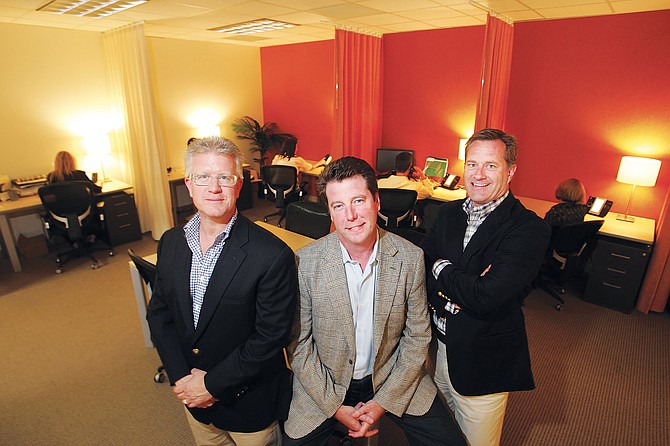 Commission-only real estate agents are notorious for a mercenary approach to the business, jumping ship from one agency to the next in search of a bigger slice of the action.

So what to do when starting a residential brokerage in the midst of the worst industry downturn in a generation? Give brokers a piece of the company.

The company will issue stock to its brokers that they can cash out after what is essentially a vesting period. What’s more, equity profits are invested in real estate acquisitions.

It all amounts to a rather large wrinkle on an agent-owned business model tried in the past with mixed results.

“It has to be compelling enough so that people will dive past their own fears of change into something that is so new and fresh,” said Segal, 49, the company president, who hopes to foster loyalty with the business model.

It remains to be seen how much loyalty there can be in the cutthroat brokerage business. But so far, in an era of squeezed commissions, the startup has been able to expand quickly. It added 14 agents this year, boosting its roster to 29.

The founders also have made their first commercial real estate purchase: a $5 million investment in an L.A. County office property that is slated to serve as Partners Trust’s third office. The company leases its Brentwood office and has signed a lease for a second location in Beverly Hills, which it will occupy later this year.

While other residential brokerages have had success with different profit-sharing models, several in the industry said they knew of no other company that systematically buys commercial real estate as investments.

“Everything sounds good, but just hearing about it for the first time – are they buying a commercial property with 50 percent down? 10 percent down? Could it fail and could all the stockholders lose their money?” questioned Steve Goddard, president of the California Association of Realtors and a manager of Re/Max Beach Cities Realty.

Nevertheless, Goddard said he was intrigued by the business model, at least in theory.

“That’s a great idea,” he said. “All Realtors should own property.”

The company, which specializes in middle-class and luxury homes in Los Angeles County, started in September 2009, two months after Segal and Smith left the Brentwood office of Sotheby’s International Realty.

The duo was joined by three other partners – Hugh Evans, Richard Stearns and David Findley – and began immediately making sales as more than a dozen agents joined by year’s end.

The partners plan to hand over 10 percent of the company’s equity over the next five years by making annual distributions of “phantom” stock representing 2 percent of total equity. In 2015, the stock will be converted to common shares. The amount received is tied to the dollar value of each agent’s transactions and can be traded internally.

After 2015, an agent joining the company would have to buy stock in Partners Trust only if desired with no more annual distributions of stock taking place, Segal said.

Agents also are required to give the company $500 each month to offset startup costs, such as advertising. The contribution is treated as an equity investment. Segal said the fee may be dropped or waived as costs decline over time.

Not every broker they have courted has been sold on the idea, nor have the partners hired every broker interested in joining. “We just want good fits,” said Smith, 50. “When associates come to the office, we want everybody to share information and have common goals.”

The company has been able to attract top talent. Evans, who joined Partners Trust in September and became a co-founder, was formerly a top broker at Prudential California Realty Brentwood.

“All the associates know they can walk up to one of the founding partners and we will drop what we are doing and help them. That’s not the culture of the industry,” said Evans, who has sold about $70 million of real estate since joining.

The bottom line for any brokerage is the business it does. Segal and Smith declined to discuss financials in depth, but claimed the company was profitable in the first half of the year. In June, Partners Trust handled 15 deals totalling roughly $40 million, and it’s done well enough to open the second office in Beverly Hills later this year.

Among the company’s current listings are a $23 million home in Pacific Palisades, a $12 million home near Lake Hollywood and an $8.5 million home on Mulholland Drive.

“Based on having really good leadership and really good agents, any business model is going to have a tremendous leg up,” he said.

The company’s first real estate acquisition, made late in 2009, was a 3 percent stake in a county office property that the company declined to identify due to competitive reasons. Partners Trust also is considering buying other properties, such as apartment buildings.

Keller Williams, which is based in Austin, Texas, and boasts 80,000 agents, is probably the best known brokerage that comes close to the Partners Trust business model. However, agents only get a share of profits, not equity, and real estate acquisition is not part of the equation.

Jeff Pantanella, who manages a Keller Williams brokerage team in West Los Angeles, said that the agency has a culture that fosters teamwork, including an internal program that assists brokers dealing with hardships.

“If you don’t have a culture to back it up, it will fall to pieces in a short amount of time,” he said, noting how agents normally have little concern about the success of their colleagues.

Segal said he’s aware of the importance of creating a positive culture at a company that demands employees work together toward a common goal.

“We take care of our associates and they will take care of us,” he said. “They do need to hang in with us. The culture is just that, it is of trusting.”

Goals: Opening two additional offices by end of 2011, with 40 brokers at each location.

The Numbers: Company profitable in first half of this year.