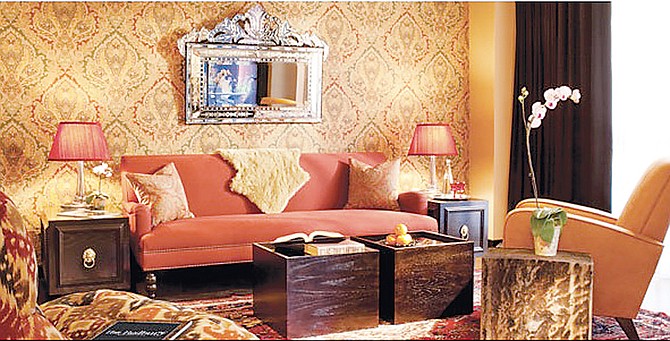 A room at the Sam Nazarian-managed Redbury hotel in Hollywood. Photo by Courtesy Photo

Sam Nazarian is set to open the delayed hotel formerly known as Palihouse Hollywood in September, and details are beginning to emerge about the L.A. entrepreneur’s hotel venture.

The hotel, at the famed intersection of Hollywood and Vine, will now be called Redbury. It features 57 rooms designed as extended-stay suites for traveling gliteratti – although they’ll be available for one-night stops as well.

Palisades Development, the original developer of Redbury, ran into financial problems earlier this year and was forced to sell the property to CIM Group for $15.8 million. CIM brought in Nazarian and his company, SBE, to run the hotel operations.

Redbury is making its debut as L.A.’s hotel industry is slowly beginning to recover from the recession. The average room rate declined 1.5 percent in April to $140.53 from March, while the occupancy rate increased 5.5 percent to 70 percent for the same period, according to PKF Consulting.

But it’s also opening amid an increasingly competitive Hollywood hospitality market: The W Hollywood Hotel & Residences opened in January to much fanfare, while the Hollywood Roosevelt Hotel is still popular with hipsters and celebs.

But Nazarian, who operates the trendy SLS Hotel at Beverly Hills, the Sahara Hotel & Casino in Las Vegas and others hotels, knows how to cater to the young, rich and famous.

It’s been quite a year for American Apparel Inc.

The downtown L.A. company lost 2,500 workers after an immigration crackdown; faced debt troubles; and is now dealing with the fallout from the resignation of its auditor, Deloitte & Touche LLP.

The resignation of Deloitte, which was disclosed in a Securities and Exchange Commission filing July 28, sent American Apparel’ shares plummeting and prompted bankruptcy rumors by Jezebel, a women’s interest blog, and a columnist for BNET.com, a CBS website.

American Apparel Chief Executive Dov Charney wouldn’t comment on the bankruptcy rumors. He did say that he’s looking forward to working with American Apparel’s new auditors, Marcum LLP – which served as the company’s accounting firm before Deloitte took over in April 2009.

American Apparel, known for its T-shirts, skin-tight leggings and mesh bodysuits, said in the regulatory filing that Deloitte notified the company that its financial statements for 2009 may not be reliable.

Frederick Schmitt, managing director at West L.A. investment banking firm Sage LLC, said the audit problem might not be significant. But the resignation of Deloitte is worrisome for investors nevertheless.

“You get comfort knowing that Deloitte is in there signing off that the financials were prepared according to accounting principles,” Schmitt said. “And if Deloitte doesn’t feel comfortable signing off on the numbers anymore, it doesn’t give you a lot of comfort.”

When Kathy Faulk became the new general manager at Millennium Biltmore Hotel Los Angeles, she didn’t have to change her daily commute much.

That’s because Faulk, who was named the new general manager of the downtown L.A. hotel in July, was the general manager at Hilton Checkers Los Angeles – about a block south of the Biltmore on Grand Avenue.

“The game plan is to continue to have the Biltmore be just an alive, vibrant part of what’s been happening with the renaissance of downtown Los Angeles,” Faulk said. “We want to capitalize on group opportunities in our building because we think our space is distinctive.”

The Manhattan Beach shoe company, which operates a Shape-ups on Fifth Avenue in New York, has found success with its Shape-ups and Tone-ups shoes. The company claims the footwear lines are designed to burn more calories, tone muscles and improve posture.

Skechers beat analysts’ expectations for the second quarter, reporting net income of $40.2 million, compared with a net loss of $5.9 million for the same period a year ago. Analysts are expecting further growth as the company’s Shape-ups shoes hit more international markets.