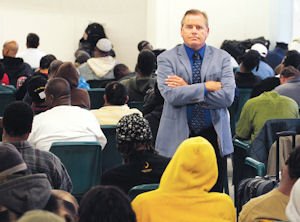 Rev. Andy Bales won’t turn his back on the needy at Union Rescue Mission even though donations have fallen. Photo by Ringo Chiu.

Last year proved to be the toughest in the 118-year history of the Union Rescue Mission. Demand for its services hit an all-time high at the same time donations shriveled.

This year is already shaping up even worse for the downtown L.A. homeless shelter. Charitable giving has dropped an additional 21 percent, while demand for its services continues to rise.

But now, if President Obama’s proposed federal budget is enacted in October, the future could be even direr. The budget not only would raise the tax burden for the shelter’s wealthy donors, but it would significantly cut the credit for charitable giving.

“As much as I’d love to be my normal optimistic self and say that people give despite the tax law,” said Rev. Andy Bales, the shelter’s chief executive, “I’m hearing from too many friends who really weigh the tax benefits before they give.”

The proposed changes, which would go into effect Jan. 1 if they are adopted by Congress, would raise the marginal tax rate for couples with incomes greater than $200,000 from 30 percent to 36 percent. Income greater than $250,000 would be taxed at 39.6 percent, up from 33 percent.

What’s more, a 28 percent cap would be placed on charitable gifts that can be claimed as a tax credit, down from 35 percent.

U.S. Treasury Secretary Timothy Geithner has argued the proposed changes, which will help pay for health care reform and other programs, are likely to have only a “modest effect” on giving.

“The most important thing you can do for overall charitable giving,” he said, “is make the economy strong.”

But the Union Rescue Mission is one of many non-profits that fear the effect will be far worse.

While very large donors may “find a way around” the lowered charitable deductions, such as by making bequests, Finestone said, smaller donors will likely just pull back.

For example, a couple earning $250,000 annually could incur an additional tax liability of $16,500 under the proposed new rules. That’s nearly the $20,500 that the average such couple would give to charity, according to census data.

Even if they still gave the average amount, the reduction of the tax credit means that instead of saving $7,175 in taxes for their $20,500 donation, the couple would only save $5,740 – a difference of $1,435 that would have to come out of their pockets.

“They’ll give less or give less often,” Finestone said. “Most likely they’ll stretch it out over years.”

Matt Grimes is an owner of Puritan Bakery in Carson, who ordinarily donates about 10 percent of his income to charities such as the Union Rescue Mission. It amounts to a significant sum that runs into the tens of thousands of dollars. Enacting the new tax laws, Grimes said, could reduce his giving by as much as 15 percent.

Stan Gerlach, a broker for CB Richard Ellis Group’s Century City office who donates annually, from thousands to tens of thousands of dollars, much of it to the shelter, said he’s in the same boat.

“As a Christian, I’m compelled by the Lord to tithe, so if I’m obedient to God, this shouldn’t affect my giving,” he said. “To be honest, though, it’s a disincentive.

“There are many people out there in a soft economy who are going to have to think long and hard about keeping their contributions at the same levels.”

Among Gerlach’s considerations is the more than $100,000 he spends annually putting several children through college.

“Our revenue streams have been extremely hurt at the same time that demand for services has skyrocketed,” he said. “We’re caught in a very difficult space-and-time warp being pulled in opposite directions.

“The threat by the federal government to further reduce the amount of resources available is taking us past the tipping point into a dark space where no one wants to go.”

Not everyone, however, is so alarmed.

Regina Birdsell, president of the downtown L.A.-based Center for Nonprofit Management, which provides consulting services to non-profits, believes the potential outcome may not be so bleak.

“I know that many of my colleagues are concerned, but historically, I’m not sure this will be the crisis people expect,” she said. “When you talk to donors about why they give, usually it’s because they think the work matters in the community, so this may not be a fatal blow.”

Still, several non-profits in Los Angeles are gearing up for the worse.

Sue Chen, president of Pacific Palisades-based Reef Check Foundation, which works with fisheries, local governments and volunteer divers worldwide to monitor reef systems across the globe, calls the proposal “a direct jab into the heart and soul of America, which is our desire to give.”

Because of the general funding downturn in recent years, Chen said her agency – which operates on about $1 million annually from corporate grants, foundations and private donations – has had to diversify its funding base.

“We are in a survival mode just like most of the smaller non-profits,” she said. “Without growing the funding base, our future looks grim.”

Jeff Sakaguchi, chairman of the Greater Los Angeles Chapter of the American Red Cross, which has a $13 million annual budget, said his organization is in a similar bind. It already has experienced a 20 percent to 30 percent decrease in individual donations.

Because corporate and foundation grants also have decreased, the Red Cross has had to rely more on a few wealthy donors to get by. But now, with the proposed tax changes, that too could dry up. In order to cope, the local Red Cross has cut back on discretionary spending – especially in disaster preparedness – and has increased its fundraising.

“It’s a perfect storm,” he said. “People will be figuring out how to pay for their mortgages and other taxes; I find it difficult to believe that they won’t reduce their contributions. We’re prepared for the worst, but hoping for something better.”

The Union Rescue Mission also is bracing for the worst.

Headquartered on South San Pedro Street, the 225,000-square-foot facility – the city’s oldest continuing homeless shelter – serves 3,500 to 5,000 meals a day both downtown and at a smaller center for women and children in Sylmar. It also houses about 1,000 people a night, as well as providing job counseling, a recovery program, medical and dental clinics, and services for legal aid and mental health.

Yet while the demand for services has increased by about 15 percent in the last year, according to Bales, income has gone down 21 percent.

The mission has responded in several ways. It added cots to increase capacity, stretched its food supplies, altered routes to save gas while picking up donations and got rid of several old vehicles with high repair bills.

Last month, the mission laid off employees – eight of them – for the first time in recent memory, including the director of its Sylmar facility and a chaplain. The bottom line: $1.8 million shaved from the budget, with an additional $800,000 in cuts planned by July 1.

But the non-profit isn’t just slicing, it’s also looking to increase income. Recently, the mission began talking to another agency about starting profit-making enterprises. Among those being considered are a possible restaurant franchise, a food catering business and an avocado ranch.

If all else fails, he said, there’s always the $1.5 million line of credit the mission has.

“We haven’t touched it in years,” Bales said, “and that’s how we’d like to keep it.”