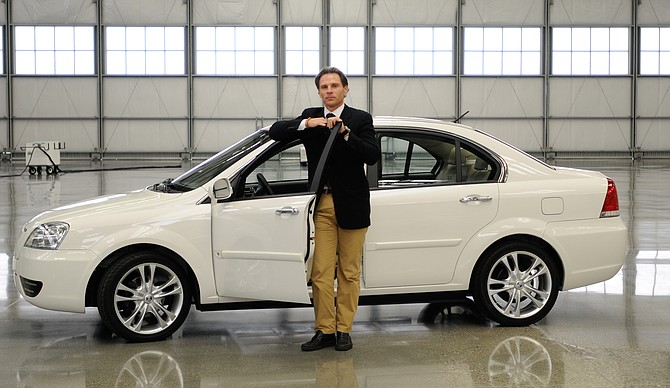 Startup electric carmaker Coda Automotive Inc. is looking to open a final assembly plant in Los Angeles County to turn out an all-electric sedan as early as the end of the year.

The effort by the Santa Monica company, which announced last week that it had secured a nearly $300 million line of credit, comes as electric auto companies BYD Co. Ltd. and Tesla Motors Inc. also are searching for space in the county.

In September, Coda completed an automotive battery plant in the Chinese port city of Tianjin with partner Lishen Power Battery, one of China’s biggest battery makers. The joint venture will manufacture lithium-ion batteries that are expected to propel the car 90 to 120 miles on a single charge.

Coda wants to be first to market in what is shaping up to be an increasingly competitive field, though the company believes demand will outstrip supply – as long as the cars prove reliable.

“There will be significantly more consumer demand than all-electric cars available over the next several years,” said Coda Chief Executive Kevin Czinger, a former investment banker at Goldman Sachs and managing director at Fortress Private Equity Funds. “The first step has to be one of utmost quality. We as an industry have to avoid any missteps of quality and safety.”

Coda is the sister company of Miles Electric Vehicles Inc., a Santa Monica company that imports low-speed electric fleet vehicles from China that have been purchased by UCLA and NASA, among others. Electric vehicle entrepreneur Miles Rubin is chairman of the holding company of both Coda and Miles Electric, where Czinger also serves as chief executive.

The sedan, called the Coda, is a compact that features traditional styling and includes standard features such as six airbags and an iPod dock. It will have an electronically limited top speed of 80 miles per hour and take more than 10 seconds to reach 60 miles per hour, slower than a similar gasoline-powered sedan. Plans call for a $45,000 sticker price, but after state and federal subsidies, the price could come down to the low $30,000s, Czinger said. Pricing has not been finalized.

The project of developing an electric car capable of highway speeds originated at Miles, but Coda was spun off in June to develop the car.

The chassis and most other parts will be assembled in a factory in Harbin, China, a city of nearly 10 million people in the northeastern part of the country. The nearly completed vehicle and the battery pack would then be sent to Dalian, near Tianjin, and from there shipped either to Los Angeles or Port Hueneme in Ventura County.

Czinger said that in addition to Los Angeles County, another jurisdiction in the state is vying for the final assembly plant, where the battery would be installed in the chassis and engineers would put cars through a final inspection. The location should be finalized in the next three months.

That’s an aggressive time line for a company that has yet to nail down its final assembly plant, but at least one automotive industry analyst said production could start within two months of a plant site being secured.

“It is a nothing in terms of effort, relative to a real manufacturing assembly plant,” said Brett Smith, director of the Automotive Analysis Group for the Center for Automotive Research in Ann Arbor, Mich. “They can do that quickly.”

Last week, Coda and Lishen, based in Tianjin, announced they were putting $100 million into the battery plant joint venture. They also said the Bank of Tianjin Joint-Stock Co. issued Coda a $294 million line of credit. The equity investment and line of credit are both going toward operation of the 1 million-square-foot battery facility in Tianjin, a Pacific Ocean port near Beijing and the sixth largest city in China.

The plant has gone through manufacturing test runs and is on schedule to meet the company’s production goals, Czinger said.

Coda has raised more than $100 million to date and is in the midst of its third investment round. Swiss investor Aeris Capital AG recently participated in the third round of financing. Other investors include Piper Jaffray Cos., clean-technology investment firm Angeleno Group LLC and former U.S. Secretary of the Treasury Henry Paulson.

The Harbin chassis plant is being leased from Chinese auto manufacturer Changan Hafei, but Coda employees will supervise the manufacturing process. Czinger said Coda did not want to transport the batteries to the Harbin plant, given the possibility they could be damaged on the 750-mile overland journey from Tianjin. He also noted that it made more sense to do final assembly in the Unites States, where the process can be closely monitored.

“I suspect they believe there are significant benefits to saying made in America,” Harrison said.

Coda will sell its cars at a flagship dealership in Santa Monica on Wilshire Boulevard and another in the Bay Area. Czinger said the company is looking into opening dealerships in Orange and San Diego counties.

Coda also has secured “a partner that has 75 company-owned stores across California” that will service Coda vehicles. He said that a roadside assistance and service program is fully developed, but he declined to name the partner. Coda plans to train technicians at community colleges in California, but has not released details. The car will come with a three-year/36,000-mile limited vehicle warranty and the battery will have an eight-year/100,000-mile warranty.

Harrison said securing such a network would be very important for a new electric car from a virtually unknown automaker.

“How do you service them and how do you stand behind them?” said Harrison. “That’s far more difficult than screwing a battery and a motor into a chassis. If you are going to be serious in the car business, it is really going to need a network.”

The prospect of Coda – in addition to BYD and Tesla – opening plants in the county would be a boon for the area.

Automakers large and small, including Nissan and Mitsubishi Motors, are in the process of rolling out electric vehicles. German carmaker BMW already leases an electric Mini in the United States.

Startups such as Aptera Motors of Carlsbad and Fisker Automotive Inc. of Irvine plan soon to sell all-electric cars of their own. Aptera has an inexpensive, three-wheel car and Fisker a high-performance sedan.

Coda’s biggest immediate challenge may come from Nissan, which announced last week that its all-electric hatchback, the Leaf, will go on sale in December. After federal and state tax breaks, it will cost about $20,000 in California, about $10,000 less than the Coda after subsidies. However, Czinger maintained the Coda will have a longer range than the Leaf, which he said will get 100 miles on a single charge.

Southern California makes sense as a location for the companies, according to analysts, because it’s the biggest auto market in the United States and has seen an explosion in green tech firms both directly and indirectly involved in the production of electric and alternative energy vehicles.

“It looks like we are moving to a point where you’d have some critical mass in this,” said Jack Kyser, chief economist with the Los Angeles County Economic Development Corp., noting that in the past the county lost out on some biomedical research business – another hot sector – to neighboring counties.

“Obviously there would be jobs created and they will be making investments and paying taxes. It would be both a boost to the ego and the pocket,” he said.

BYD, based in Shenzen, China, is searching for sites to house its North American headquarters and an assembly plant for its e6, an all-electric vehicle said to have a nearly 200-mile range on a single charge. It is considering sites in Los Angeles, Long Beach and Lancaster. BYD’s broker, Ben Stapleton, leader of the national clean technology group for Jones Lang LaSalle, said a decision could be announced by May.

Tesla Motors of Palo Alto, which makes a high-performance, all-electric roadster, maintains its design studio in Hawthorne. It also is looking to locate a car manufacturing plant in the county. Downey and Long Beach are the leading candidates vying for the much publicized Tesla facility, though little movement has been reported in recent months.

Coda wants to open a second battery manufacturing facility in the United States in a “couple of years,” Czinger said. It could be located in California, though other states are also being considered. The company is working with the Department of Energy on the facility, which might involve retrofitting an existing auto plant.

“Our interest is in U.S. jobs, U.S. energy and ending our dependence on foreign oil,” he said.

Stapleton, also Coda’s real estate broker, said his team has been helping the automaker evaluate locations for the U.S. battery plant. In February, Stapleton brokered a five-year lease for the company’s new headquarters at 820 Broadway in Santa Monica.

Czinger, who has spent weeks trying to secure the final assembly plant and touring the country for sites to locate the second battery facility, said his efforts are part of realizing a dream.

“My dream is that one day when we are mountain biking or hiking in L.A. and you get to the top of Sullivan Canyon and look out you will no longer see that gray layer hovering over L.A. and you will see a clear, bright sky,” he said.